The Jet Falcon (ジェットファルコン, Jetto Fārukon) is a Falcon-type of Zoid, a race of biomechanical lifeforms from the Zoids franchise.

The Jet Falcon is a Blox Zoid originally designed by ZOITEC. It was intended as a Blox-CAS for the Neo-Zenebas Empire's Energy Liger, but ultimately went into production for the Helic Republic. The Republic fielded the Jet Falcon both on its own as an aerial combat Zoid and as a B-CAS for the Liger Zero. In either form, its effectiveness comes from its blistering speed and its powerful Buster Claws that can function as melee weapons or ranged energy projectors.

The Jet Falcon curiously exists in a Guylos Empire variant, the origin and deployment (if any) of which is unknown.

As a Blox Zoid, the Jet Falcon can combine with other Zoids, and it specifically serves as a Blox-CAS to create the Liger Zero Falcon (with Liger Zero) and Energy Falcon (with Energy Liger). It can also form the Falcon Burst with Dispelow and Leo Gator and the Rapid Falcon with Dimetra Ptera and Evoflyer.

Emperor Wolff Muroa piloted his modified Energy Liger into the final battle in the capital. The Zoid's enhanced Energy Charger overloaded, threatening to destroy the city and both armies. The Liger Zero Falcon piloted by Republic hero Ray Gregg was able to link up with the Energy Liger, siphoning off the energy and expelling it as a massive beam of light. Following this close brush with disaster, the war (and the New Battle Story) came to an end.

The Jet Falcon appears from episode 16 onwards. RD and the Liger Zero disappear for three days following the loss of the Fire Phoenix, and while resting in a forest, the pilot encounters a young girl, Venus. At the same time, Matt and Dan, who are exploring ruins in the same forest, come across a stone Zoid, half-entombed in a cliff and weakly broadcasting a signal on the same wavelength as Fire Phoenix. RD ends up fleeing to the same ruins after encountering Gairyuki. The combined efforts of Venus and Matt awaken and free the Zoid, revealing it to be the Jet Falcon, a Fuzor partner for Liger Zero. The combined Liger Zero Falcon is able to defeat the Gairyuki.

The abilities of the Jet Falcon are used heavily in later episodes; allowing RD and the Liger Zero to board a captured Whale King in episode 17, and to help stop the rampaging Gojulas Giga in episode 22. In the end, the Liger Zero Falcon was revealed to be the legendary Alpha Zoid, and was able to defeat the Seismosaurus.

The Jet Falcon is molded white, black, grey, and bronze, with bronze Buster Claws, and an orange translucent cockpit canopy. It also contains two Blox (silver "Core" and grey "sky") and a standard grey Republic pilot. Although marketed as a Blox Zoid, most of its construction is fairly conventional, though unmotorized, and centers on a prebuilt pneumatic mechanism.

It can be broken down and used as a CAS for Liger Zero or Energy Liger. Although the combination with Energy Liger hypothetically requires an adaptor included only in the NJR and Fuzors releases of the larger Zoid, a standard Blox can be substituted for this part. 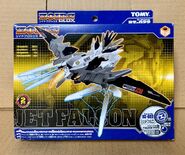 The Jet Falcon was also released as part of the Z-Builders line, although it does not appear to have been released in North America or by Hasbro. Instead, it came out in the Philippines, Australia, and other Pacific territories under the TOMY brand. It was recolored white, dark blue, and bright yellow, with bright red Buster Claws and a clear translucent canopy.

Jet Falcon's packaging includes images of it using a "backpack" made of Cannondiver parts, despite the Cannondiver having never received a Z-Builders release. The packaging also shows the Jet Falcon's dark blue parts as dark grey.

The Jet Falcon was released twice in the Fuzors model line; first packaged with a Liger Zero as the Liger Zero Falcon, and then immediately afterwards as an individual model kit.

The model is recolored in light grey, dark blue, and gold, with dark red Buster Claws and a translucent light blue canopy, to match with the Jet Falcon seen in the anime. It is functionally a darker version of the Z-Builders release.