The King Gojulas (キングゴジュラス) is a Tyrannosaurus type Zoid, one of over 200 species of fictional biomechanical lifeforms depicted in TOMY's Zoids model, toy, and media franchise. Highly sought after by collectors, it's notable for its involved construction, lights-and-sound features, and its place as one of the final two designs before the original line's cancellation.

The Helic Republic designed the King Gojulas to turn the tide in their war with the Guylos Empire. A massive Zoid with extreme Godzilla design influences like other Zoids in the Gojulas line, it boasted extremely thick armor and highly destructive rapid-fire weapons, as well as advanced sensors and sonic weaponry; the Super Sound Blaster was designed to amplify its roar to deadly volumes, rattling apart Zoids it couldn't reach to destroy in melee. In actual combat, it proved nigh-unstoppable, going down on record and in many promotional catalogue texts as the single strongest Zoid of its era.

The King Gojulas was deployed during the Republic's invasion of the Guylos Empire, making use of every possible piece of advanced technology at the time, to the point where it was hailed as "the greatest Zoid in history" in the technical data sections of its box. It lived up to its reputation, taking on and destroying large numbers of Dark Army Zoids as it continued on to the Empire capital unchallenged.

Desperate, the Guylos forces prepared the Descat, planning to use the crushing power of its Super Gravity Bullet Cannon to halt the King Gojulas' advance. However, as the hour of the final confrontation drew near, a comet struck one of Zi's moons, raining down meteors and destroying large numbers of Zoids. The King Gojulas was likely among them. As of yet, it has yet to reappear in any new release battle story or fanbook content (except in flashback).

The Zoids most significant appearance was in the opening of Zoids Mokushiroku where it is shown for a second then the scene cuts to a meteor impact. It is also a secret or hidden Zoid in several Game Boy/Game Boy Advance games via completing extra portions of the game and/or entering special codes. The King Gojulas also appears in Zoids Saga III as part of the regular game.

The King Gojulas is one of the largest model kits comparable in size to the Ultrasaurus, Madthunder, and Gilvader. Probably the most iconic Zoid model, it is highly sought-after by both fans and collectors and is the most expensive Zoid kit made by Takara Tomy to date. Vintage models fetch high prices on online auction sites.

Due to a molding flaw, the King Gojulas’ red horn can be easily broken. It uses two sources of power, two “C” sized batteries and two “AA” sized batteries for movement and sounds. Once activated, the Zoid walks forwards, arms swinging back and forth, tail moving from side to side, then it stops walking, the three chest-mounted guns starts to spin, opens both arms and roars as the head rotates from left to right. The eyes also flash on and off.

The King Gojulas is a part of the Grade Up Series. Due to its design, the Zoid cannot use the GU-03 Eye Flasher, but is fully compatible with the others.

First released in 1990, it was never sold in the United States.

Also known as Blue King Gojulas, it is a variant model having all the gray parts re-colored in light blue. It was once seen auctioned off Yahoo Japan. Not much was known about this model or how many were made. It was later discovered to be a contest prize from a Japanese magazine.[14]

Takara Tomy re-issued the kit in September 2008 as part of their 25th anniversary celebration. The only main difference from the vintage model is the color of the secondary power switch from the original red to the present black. 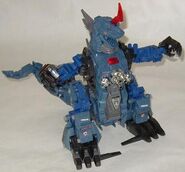 Comparison of all existing models