The Leo Gator is a lion/alligator-type of Zoid, a race of biomechanical lifeforms from the fictional Zoids universe. Its name is also parsed Leogator (レオゲーター, Reogētā).

The Helic Republic's Leo Gator is, as its name implies, both a lion and an alligator-type Zoid, capable of changing between two forms to adapt to different operational goals. The heart of the Leo Gator is the TB8 engine, a transforming power core that eliminates the lack of power available to previous Blox Zoids. The Leo Gator's lion form is designed for fast attacks, while its alligator form provides heavier support and allows for amphibious operations.

Like all Blox Zoids, the Leo Gator can merge with other Zoids to form more powerful forms. Two such combinations are the Armored Leo (with Gairyuki's support units Hien and Gekkou) and the Scissor Arm Gator (with Evoflyer).

The Leo Gator was important during the first landing stages of the Republic's attempt to retake the Central Continent, as it was able to quickly change from an aquatic form into a faster and more mobile attack form. They served as the front line for a short period of time, proving initially effective, but it was hard for the Leo Gator to use its special equipment during a firefight, and, as a result, most of the ground units were lost.

Their most notable contribution doing the war was in October, ZAC 2108, when a force of Leo Gators was sent to assault a Neo-Zenebas fortress. The fortress was situated along the Wilson River which led to the Republican capital, and held many Chimera Blox Zoids. Not only did the Leo Gators' amphibious abilities allow the force to attack from the river itself, but the Zoids' unexpected transformation abilities took the defenders off guard and allowed the Republic force to defeat them.

The Leo Gator appears in Fuzors episode 21 as a phantom Zoid attacking others in Blue City. It is piloted by a brainwashed Luke, though both pilot and Zoid seem to be under the control of Rebecca. It is sent on a rampage in which it attempts to destroy all of Blue City's Zi fighters. Vareth's team eventually tries to stop it, but are themselves defeated by Blake. Blake too then tries to stop Luke, and while he does stop the Leo Gator, Rebecca intervenes and takes him away. 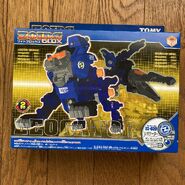 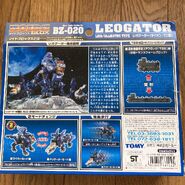 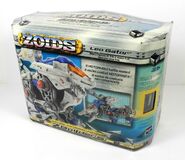 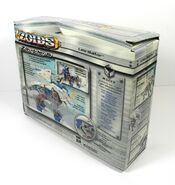 Leogator was first released as a part of the Blox line. It is made up of four sprues in blues and greys, as well as a single silver Core Blox, and is largely constructed around a "transformable" preassembled motor unit. It also includes a standard grey Republic pilot. It could be built in either of two forms; both forms used all of the model's parts, including the pressure-activated "Z-Faust" missile launcher.

The motor runs on one AAA battery and was shared with Brachio Zilla and Dimetra Ptera.

The Leo Gator was also released as a part of the Hasbro Z-Builders line; the Hasbro colors were used in the Fuzors anime. This version of Leo Gator is white, blue, and silver, with a slightly metallic white plastic of the kind found in many Fuzors releases. Like all Hasbro-originated Z-Builder kits, the Leo Gator includes a Blox that is Republic-style but has red innards.

Due to the cancellation of the US Zoids line, Leo Gator was available primarily in the UK.