Note, this article also contains the Wolf-type Genius Wolf due to mold similarities.

The Leoblaze is a Lion-type Zoid, designed by the ZOITEC Corporation for use by the Helic Republic in their counter-offensive against the Neo-Zenebas Empire.

Like many Blox Zoids, the Leoblaze is capable of rearranging its structure to combine with other Blox or Zoids. The Zoid's primary Fuzor partner is the Unenlagia; the two combine to form a completely new Zoid, the D.A. Lizards. Additionally, the pair can combine, along with the Mosasledge and Nightwise, to form the Matrix Dragon.

The Leoblaze was developed by the ZOITEC Corporation, and sold to the Helic Republic. First deployed in ZAC 2102, the Zoid was eagerly adopted by the devastated Helic armies, who were desperate for new weapons to face the Neo-Zenebas forces with. The Zoid proved to be effective against the smaller Neo-Zenebas Zoids like the Demantis and Guntiger, as well as the Chimera Blox.

However, with the appearance of the Seismosaurus the bulk of the Helic army was destroyed, the majority of the Leoblaze amongst them. The design was later replaced with an advanced derivative, the Leostriker.

The Leoblaze first appeared in Zoids: Fuzors, used by Mach Storm pilot Matt, who proved himself to be a more than capable pilot, even though he was too young to legally pilot a Zoid.

The Savage Hammer team formed a squad consisting of a Unenlagia, Mosasledge, and Nightwise. They intended to create the Matrix Dragon Fuzor, but required the Leoblaze owned by Mach Storm to complete the Zoid. Matt's Leoblaze was stolen and re-registered to Team Savage Hammer, and efforts by the characters to have it returned resulted in an unofficial battle between the two teams. During the battle, the pilots of the Matrix Dragon turned on Savage Hammer, using the Fuzor to fight both R.D.'s Liger Zero Phoenix and Blake's Buster Fury.

The Matrix Dragon was destroyed by the Energy Liger, sharing its fate with the Berserk Fury.

The Leoblaze's sole appearance in any manga was in Zoids: Galaxy Quest Planet Zi. The zoid was piloted by Kugo, one of the main protagonists, after his Konig Wolf was destroyed by Flyscissors and Shellkarn.

The Leoblaze appeared in the Zoids Saga series. In both games it was piloted by the Republic force's Zan. In Zoids Infinity Fuzors, the Zoid is called by the name "Infinity Leo", it will be unlocked once the story mode is completed, piloted by the main character, Lance.

The Leoblaze is a component Zoid of the Matrix Dragon and D.A. Lizard Fuzors.

The Leoblaze comes on three frames, along with a frame of connector pegs (that is shared with several other Blox Zoids), four black Blox, one silver Blox, two canopies, eight rubber ring caps, a grey pilot, and label sheets. The Leoblaze is moulded in red and grey, with clear orange eyes and canopies. The actual shade of red can vary to some degree; some Leoblazes are more pink than red.

The Leoblaze was released as a part of the Z-Builders line by Hasbro. This version was identical to the Blox version, save for packaging. 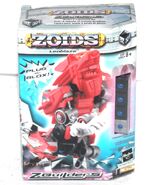 The Leoblaze was also released in very limited numbers as a part of the New Pacific Release.

The Leoblaze was released as part of the Fuzors line. There were no physical changes to the model, but the Leoblaze was recoloured, with the red becoming a shade more pink and metallic and the legs and paws a bit darker and more metallic as well. The Zoid also included a custom sticker sheet to reflect its Team Mach Storm allegiance.

A double pack containing Leoblaze and Nightwise was released as a Special Color Version Gold. The Leoblaze in this release was moulded in gold, dark brown, and gunmetal.

Released in 2005 as a limited edition Zoid with the Zoids Infinity Fuzors video game. It comes with unique shoulder and head parts as well as a new rounder core Blox seen in limited models such as the Blade Hawk. The Zoid includes enough parts to build a recolored Leoblaze or the Infinity Leo. However, one may take all of these new parts and turn them into a small replica of an arcade console. If this is done, one may build the regular Leoblaze though the guns on the underside will be missing. Said arcade console was found full scale and operational in Japan for some time with the Zoids infinity Fuzors game to play. In Zoids Saga Fuzors, the Infinity Leo plays a key role, becoming Lance's new Zoid while it's counterpart the Leo blaze is absent from the game.

A metal Leoblaze as well as three other Blox Zoids were released in limited numbers. The metal Zoids were not to scale and consisted of fewer pieces than the originals much like the One Blox Zoids series.

The Leoblaze is a component Zoid of the Matrix Dragon and D.A. Lizards Fuzor Zoids. See these articles for information on the Leoblaze as a component of these larger Zoids.