In terms of the model kits, the CP-20 Jager Unit Jager was the second CAS to be developed for the Liger Zero. It focuses on speed and maneuverability. The two large Ion Boosters mounted on its back serve to make it a very fast Zoid. It is, however, lightly armed and armored, as it only has a pair of vulcans mounted onto its face and the double-barreled Shock Cannon on its stomach by way of ranged weapons. It retains the Strike Laser Claw of the basic Zero, but is far more noteworthy for its speed than its combat ability.

"Jäger" is German for "hunter". It is also a play on the last name of Charles Yeager, a U.S. test pilot and the first man to travel at the speed of sound in 1947. This is likely due to it's exaggerated ability, shown in the anime, to be able to travel at just over supersonic speeds similar to the Lightning Saix. Both have been shown to create small, but powerful sonic booms when passing close by other Zoids at each of their respective top speeds.

As one of the Customize Parts, the Jäger CAS saw an initial release between 1999 and 2001 as part of the NJR.

In Korea, the Jäger CAS was released by Academy, and sold boxed along with the base Liger Zero. The Korean version of this Zoid was produced in limited numbers and is somewhat expensive and hard to come by.

A chromed version was released by TOMY in limited numbers.

The Liger Zero Jager was the first CAS to be deployed in the New Century anime. Its lack of significant ranged weapons and relatively unimpressive amounts of armor (at least when compared to the other two CAS units shown in the anime) came as an initial surprise to Bit. Despite this, it became the one fielded first, and the most commonly used of the three armors. It was primarily used to counter Jack Cisco and his Lightning Saix, whose top speed was far higher than the Liger Zero's basic system. The Jager was not only able to keep up with Jack's Zoid, but also proved to be highly maneuverable as well. Its lack of power did prove to be a disadvantage, as it was unable to best Harry Champ's Iron Kong, the Fuma Team and their Neo Warsharks and was not deployed against Stoller's Elephander, who's melee weapons were considered to be too fast for the Jager to combat effectively. The Jager was also the only CAS to be used in a battle which the Blitz Team lost, as Bit was forced to surrender during his second battle with Jack Cisco. 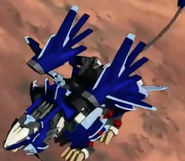 The Jager appeared in the New Century manga, unlike the anime it is the second CAS to be deployed.

The Jager also appears in the Chaotic Century manga, seen next to the Schneider, Rosso and Viola use them to fight Van.

The Hunter and The Tank by zrgarcia
Add a photo to this gallery
Retrieved from "https://zoids.fandom.com/wiki/Liger_Zero_Jager?oldid=54352"
Community content is available under CC-BY-SA unless otherwise noted.
FandomShop Newsletter Join Fan Lab