The third CAS for the Liger Zero (in both the anime and models), the CP-21 Liger Zero Panzer (ライガーゼロパンツァー, Raigā Zero Pantsuā) is specifically designed to be a heavy-artillery Zoid. It has a great number of missiles, as well as two powerful "Hybrid Cannons", and is wrapped in thick armor that offers much more protection than the basic armor does. However, this comes at a cost, as the Zoid is not as agile as it would if it were to mount the other CAS units.

A Hasbro action figure was made of the panzer, although it more closely resembled a green Jager[10].

In 2014, a clear version of the HMM Panzer CAS could be obtained by purchasing the New Century BD-BOX CAS Set Clear Ver.

In New Century, the Liger Zero Panzer was the final, and the least used, of the three CAS units. This was because, the anime greatly exaggerates the weight of the armor: in the Battle Story, the Panzer was capable of moving at a respectable 285 km/h, while in New Century, the Panzer is nearly immobilized by the armor's mass. Furthermore, it caused the Liger's systems to overload and generate excessive quantities of heat. This meant that it was a unit that could potentially inflict permanent damage to the Liger. The Hybrid Cannons are also portrayed as being a pair of single, extremely powerful beam cannons. The Panzer was eventually deployed against the Elephander in the Blitz Team's third encounter with the Zoid. It was not only able to effortlessly withstand the Elephander's AG unit's missile attacks, but it was also able to shatter the Energy Shield that had previously shattered the Schneider's blades. However, it did not actually defeat the Elephander, and shut down from the excessive strain that using the Panzer's weapons put on the Liger. It was only when the Backdraft showed up that the Zoid rebooted itself, unleashing a missile barrage (called the Burning Big Bang) that annihilated the Backdraft's unmanned Zabats. Apart from in minor roles, the next appearance of the Panzer would be against the Berserk Fury, as Bit had damaged the other two CAS units in prior episodes. It would be unable to penetrate the Fury's shield, but would help destroy a falling Judge Satellite with its missile barrage (which Bit erroneously calls a Megabomb). As this missile barrage caused the Panzer to spontaneously overheat, it was ejected, and the Liger Zero's basic armor was used for the remainder of the battle. 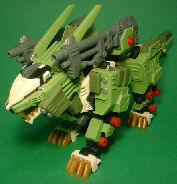 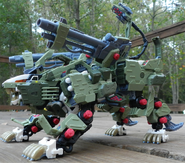