The Lightning Saix (EZ-035 ライトニングサイクス) is a Cheetah-type of Zoid, and one of over 200 species of bio-mechanical lifeforms that form the Zoid race depicted in TOMY's Zoids franchise.

The Lightning Saix is a high-speed land Zoid.

The Lightning Saix is well armed, carrying a pair of Pulse Laser Rifles on its back, as well as a pair of small Vulcan Guns in its head. The Saix's Pulse Laser Rifles only point directly forward and cannot be turned, meaning that the Zoid is rather vulnerable to attacks from the flanks or behind. However, the fixed position of the back-mounted weapons is a necessity, as the Saix would lose its balance if the rifles were to turn while running at high speeds. The Lightning Saix can turn its head to use the Vulcan Guns against opponents attacking from the flanks, though, and the Pulse Laser Rifles are not immobile, they are seen to have a small degree of movement laterally and vertically.

Additionally, the Lightning Saix has a pair of Vertical and Wing Stabilizers, which are located at each side of the Lightning Saix's Pulse Laser Rifles. They serve as to stabilize the Zoid while running at high speeds, and allows the whole kicking power of the Lightning Saix to be transferred to the ground, making sure every ounce of force hits the ground to maximize the Zoid's running efficiency. The stabilizers also help reduce drag and air lift to the Zoid, making it run perfectly steady despite the great and sudden accelerations that can take place while mobilizing.

The Lightning Saix was created by the Guylos Empire and is one of the many combat Zoids used by their military.

Evolved from a Helcat using an Organoid System, the Lightning Saix is notable as being an exceptionally maneuverable land-based Zoid. It has incredibly high-performance, with exceedingly fast acceleration and a massive top speed. While it cannot make sharp turns while running at its top speed, it can strafe and maneuver quite well. The Zoid is also surprisingly stealthy; while not invisible to sight or radar, it is very elusive.

The Helcat had been the premier covert operations Zoid of the Zenebas Empire, and later the Guylos Empire, for decades. However, by ZAC 2100, the Zoid had become obsolete. To replace the Helcat, the Guylos Empire developed the Lightning Saix. While it was unable to turn invisible like the Helcat, the Saix offered far superior performance. Relying on its speed for stealth, the Zoid could evade any incoming missile fire by creating a holographic illusion of it, achieved through turning from one direction to another.

The Lightning Saix could even outmatch the speed of the Blade Liger when dodging heavy enemy fire.

The Lightning Saix first appeared in Zoids: Guardian Force. The high-performance Zoid was developed by Dr. D for the Guylos Empire. It was created from an Ancient Zoidian data-template, to counteract the threat of Raven's Geno Breaker. The performance of the test prototype was too much for the initial test pilot to handle, even with a limiting system installed on the Zoid. The pilot lost consciousness, and was remotely ejected before the Lightning Saix ran into a rock face. The Zoid was easily repaired, but the combat data was irreparably corrupted in the accident.

Since his Command Wolf had been destroyed by Raven shortly before this incident, Irvine was convinced to have the combat data from his Command Wolf transplanted into the prototype Lightning Saix to replace what had been corrupted. After successfully testing the Lightning Saix in battle, where it easily defeated enemy forces with its speed, Irvine became the Saix's pilot, using it to some degree of success against Raven's Geno Breaker and later the Death Stinger.

The Lightning Saix piloted by Irvine originally had the standard green cockpit eyes, but they turned orange as a result of the transplanting of Irvine's Command Wolf's combat data (erroneously, the Zoid's eyes are rendered in green in some shots of later episodes [such as episode 21]). This Lightning Saix is still officially registered to the Imperial military, but it is solely used by the unaffiliated Irvine (thanks to the support of Dr. D).

The Lightning Saix featured in Guardian Force is slightly better equipped than the Battle Story version; possessing holographic projection technology. This, combined with the Zoid's high speed, allowed the pilot to create a 'false' Lighting Saix for a short period of time, which is used primarily to confuse and dodge enemy missiles. This technology has also been used on a handful of occasions to cloak the Zoid.

The top speed of the Lightning Saix is exaggerated in the anime, as the claim was made that it (along with Van's modified Blade Liger) could match the speed of a Storm Sworder, however, this feat is never explicitly shown (though Irvine did partake in a "supersonic battle" against a Storm Sworder).

In Zoids: New Century, Jack Cisco, a mercenary Zoid warrior, used a Lightning Saix to a considerable degree of success, having never been defeated until his first battle with Bit Cloud in his Liger Zero. He later joined the Lighting team of Chris and Kelly Tasker, both of whom also piloted Lightning Saixes (theirs are distinguished from his by the appearance of blue markings on the heads and red paneling on the shoulders). Together, the three of them use a technique called "drafting" where the Zoids would run in-line, cutting wind resistance by travelling in the slipstream of the leader. By using this strategy, it was possible for the rear Zoids to get a brief burst in speed when they exited the slipstream, from there, the lead Zoid (who wasn't in the slipstream) would get a significant burst in speed by being propelled forward from the drag as the other two passed. Using this technique, the Lightning Team was able to defeat the Blitz Team, making them the only such team to do so officially throughout the series (most other losing battles were interrupted).

Harry Champ was also seen to have a Lightning Saix in his collection, but never seen using it.

The Lightning Saix made an appearance in both the Zoids Saga series and Zoids VS series of video games, playing a minor role in both. In the Zoids Saga series, there is a variant of the Zoid called the 'Lightning Saix BS', listed as being a prototype with more firing power. However, it appears to be slower than the standard Saix as its speed is listed as being 310km/h as opposed to the normal 325km/h. Its base color is white to distinguish it from the normal Lightning Saix.

The Lightning Saix was also featured in all of the Zoids Trading Cards releases. 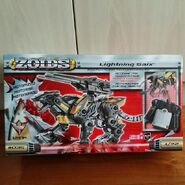 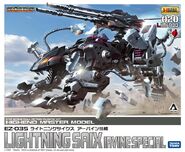 The Lightning Saix was released as part of the Zoids (1999) line. Introduced in 2000, production continued semi-regularly until 2004.

The Lightning Saix kit comes on four sprues, along with a battery-operated motor, a battery pack, a semi-transparent canopy cover, sixteen rubber caps, and a small blue pilot figure. The Lightning Saix is moulded in metallic grey, dull silver and red, with a green canopy. The Saix features a considerable amount of paint details on the frames.

The Lightning Saix uses a pair of "AAA" sized batteries stored in the pulse laser 'backpack' for motion. The model has two walking speeds, controlled by the position of the Zoid's tail; when activated, the Zoid walks forwards at high speed. The Zoid's canopy can be opened, and its claws can also be retracted into its feet.

TOMY also released a single upgrade kit of the Lighting Saix, the CP-16 Zoid Controller. Not meant to represent an "in-world" upgrade, the kit was a remote control unit that plugged into the Saix's back, in place of its regular battery pack.

The Lightning Saix was released in North America by Hasbro[10] in 2002, as a Toys "R" Us exclusive. Introduced as part of the Zoids: Build Customize Mobilize line, this version differed from the 1999 version only in minor details; each of the claws had a thin, rectangular piece of plastic moulded to it at the tips to make them somewhat blunter. This change was carried forwards to later all versions of the model, including overseas lines.

Hasbro released another version of the Lightning Saix as a Toys "R" Us exclusive in 2003. This version included the CP-16 Zoids Controller with the kit. Additionally, the red plastic parts were changed to yellow, with the red painted areas similarly changed. The metallic grey was changed to bronze as well.

The Lightning Saix was released as part of the First Wave Hasbro Action Figures line.

A customized version was done by Dengeki Hobby Magazine. Named the Ninjasaix, the Zoid appeared in the Zoids: Generations storyline. This Zoid was a custom that featured a new color scheme, backpack-mounted gun, arm-mounted blades and a mask.

A High-end Master Model Lightning Saix was released in July 2010. The Zoid features a very high degree of detail and flexibility. It should be noted that unlike the standard model kits, the HMM variant can move its Pulse Laser Rifles. Along with a water slide sticker sheet and an instruction booklet that contains lineart, the HMM kit also comes with an extra set of claws that can be mounted onto the Zoid. This was the first HMM kit to include water slide stickers. In September 2020, Kotobukiya will be releasing an EZ-035 Lightning Saix Marking Plus Ver. for 5,200 Japanese yen. It will come with a new water slide sticker sheet, and a colorless clear canopy piece.