This article is about the Gargoyle-type Zoid for the Neo-Zenebas Empire, Lord Gale. For the Zoids Saga character, see Gale Task

The Lord Gale (ロードゲイル) is a Gargoyle-type Zoid, one of over 200 species of biomechanical lifeforms depicted by TOMY's Zoids model, toy, and media franchise.

The Lord Gale is a Gargoyle-type Blox Zoid used by the Neo-Zenebas Empire.

The Lord Gale is the first Neo-Zenebas Blox Zoid to have a pilot; the previous four Chimera Blox were unmanned units. While based on the Chimera Dragon, the Lord Gale was a completely different machine in both form and function. Due to its Blox construction, the Zoid is swift and agile, far more so then the heavier Fuzor. While it is armed primarily with melee weapons, the Lord Gale is a capable combatant, able to operate with equal effectiveness on land and in the air.

The Zoid's most interesting function is its ability to control the other unmanned Chimera Blox (which was also incorporated into the Deantler design). Normally, the Chimeras act as autonomous units, but have limited artificial intelligence. Furthermore, the combination of the four different artificial intelligences during the creation of the Chimera Dragon causes the Fuzor to attack both enemy and friendly Zoids. The Lord Gale’s Chimera Control Unit is able to augment the AI of the individual Blox Zoids, and overrides the Chimera Dragon AI, allowing it to be controlled and directed.

In Zoids Legacy the Lord Gale is listed under the "Gattai" section (the term used for a Fuzor's combined form), and is stated to be a "combo" of the Demonshead and Flyscissors. It is not treated as a Fuzor in other media (such as the Zoids: Fuzors anime).

The Lord Gale first appeared in the aftermath of the Neo-Zenebas takeover of the Guylos Empire in ZAC 2102. As a part of Emperor Wolff Muroa's plan to recreate the old Zenebas empire and institute an era of "bloodless warfare", the Empire began construction of swarms of unmanned combat Zoids. To control these Zoids, the Lord Gale was developed. A capable Zoid on its own, the Lord Gale was usually accompanied by fleets of unmanned Chimera Blox.

The only anime series to depict the Lord Gale is Zoids: Fuzors. In this series, a Lord Gale is piloted by Burton, a member of the Savage Hammer team and Blake's second-in-command. The Zoid was effective in combat, able to defeat RD's Liger Zero and Amy's König Wolf on separate occasions, but was no-match for Fuzor zoids.

Burton's Lord Gale was damaged heavily by the Matrix Dragon in episode 13. The Zoid was either repaired or replaced, as he is piloting it in episode 16 (though dialogue in the English version implies the latter as it and the Buster Fury were declared unrepairable to the point of its parts being unsalvageable). Burton's Lord Gale meets its end when Burton, now working for Alpha Richter, faced off with RD's Liger Zero Falcon.

Unlike the Battle Story, there was no connection between the Lord Gale and the Chimera Dragon, who also appeared in the series in the same employ as Burton.

A notable error in the Zoid's animation is that the X-Breaker Claws are uneven in length, appearing more like a crab's claw in terms of such.

The Lord Gale made an appearance in both the Zoids Saga and Zoids VS series' of video games. It was only featured in Zoids Legacy, Zoids VS II and Zoids Saga III.

In the Zoids VS and later, the Saga series, Claudia Diamant is shown to have played a minor role with her Lord Gale, which she obtains before Zoids Battle Legends. Claudia and her Lord Gale can be fought in the fifth battle of the Zoids VS Battle mode, along with a Chimera Dragon piloted by Max Rubin. Claudia's Lord Gale is shown to be evenly matched with Max's Blade Liger.

In Zoids VS III, Burton also played a minor role with his Lord Gale, which he had fought against Arrow. His Lord Gale is shown to have a CP-03 Beam Gatling Unit. 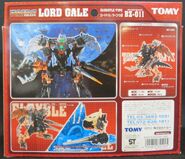 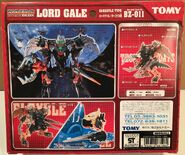 The Lord Gale comes on six frames, along with five black terrestrial Blox, two silver core Blox, two white aerial Blox, six rubber ring caps, a blue pilot, label sheets and a frame of connectors that is shared with other Blox kits. Four frames of components are reused; two each by the Demonshead and the Flyscissors. The Styluarmor would later reuse one of the Lord Gale’s frames. The Lord Gale was moulded in black, orange, and grey, with dark orange translucent wings and green translucent cockpit pieces. Like the other early Blox kits, the Lord Gale did not have faction logos.

The Zoid is not motorized, but it is very flexible and can be manually posed.

The Lord Gale was released in February 2003, with production continuing until late 2004.

A Yuji Kaida limited edition released in November 2003, the Saint Gale was remoulded in white, deep red, and metal, with purple translucent wings and yellow translucent canopy pieces. The Zoid was released with Neo-Zenebas stickers.

A limited-edition Zoid sold as a convention exclusive, this version was recoloured in clear orange, clear green, clear gray and clear pink. It is sometimes mistakenly referred to as "crystal", crystal itself being an incorrect fan term for the limited clear Z-point Zoids. The Zoid has also been derisively nicknamed "Crystal Gale", "Miami Gale" and "Disco Gale" due to its bright colour scheme.

Released as part of the Fuzors model line, re-designated FZ-007 this version was recoloured in bright metallic orange and had a red pilot and came with a new sticker sheet which depicted it's alliance with Savage Hammer. The changes were made to better correspond with the anime depiction of the Zoid.

A heavily customized version was done by Dengeki Hobby Magazine. The Zoid appeared in the Zoids: Generations storyline. A custom was made that features a new color scheme, Buster Eagle wings, and customized hands that looks like a shield with a vulcan cannon on the left and a large gun-blade combo on the right. 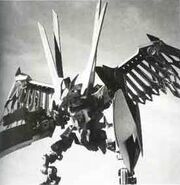 As seen in the series