The Maccurtis (EZ-047) (マッカーチス) is a Crawfish-type of Zoid, one of over 200 species of biomechanical life forms that provide the basis for TOMY’s model kit, anime and comic series based Zoids franchise.

Maccurtis is a small, aquatic Zoid designed for undersea combat. It can be operable on land, though it does not excel at land-based combat. Much like a Fiddler Crab, and unlike a crawfish, it has one claw significantly larger than the other, which contains a mid-range gun turret. Despite their size, the claws are not cumbersome, nor do they affect the Zoids mobility.

It also has two forward-facing advanced sensory antennae for communication and undersea radar.

The Maccurtis appeared in the NJR Battle Story as part of the Eisen Dragoon unit, where it was deployed alongside the Berserk Fury,Demantis, and Grounchar, forming the bulk of the unit's forces.

The Maccurtis' sole appearance was in the New Century anime as a Zoid used exclusively by the Backdraft Organization.

The Maccurtis' most memorable appearance, however, was in the episode, "The Dragon Under the Sea: In Search of the Ultimate X". In this episode, Commander Alteil undertakes an archeological survey, bringing along a force of Demantis and Maccurtis to find an Ultimate X Zoid. Much to their chagrin, the Blitz and Champ Teams choose to have a vacation at the same location as the Backdraft's expedition.

While the Backdraft hoped to ignore the Blitz and Champ teams and stay hidden, Alteil eventually sends his forces to drive them away, with the Demantis' attacking from the land and the Maccurtis' attacking from the sea. The Blitz team's Zoids are very nearly overwhelmed by sheer force of numbers, but upon finding a large, metal crate in the sea (containing the Berserk Fury and three Geno Saurers) Alteil orders a withdrawal. 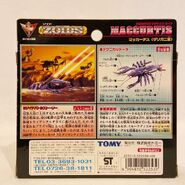 The Maccurtis was introduced as aprt of the Zoids (1999) line. It comes on five frames (one of which is shared with the Demantis, Grounchar, and Glaive Quama). The Maccurtis is molded in purple and black, and comes with a red frame.

The Zoid has no motor, but can be manually posed. As with other Zoids of it's type, the Maccurtis comes with a extra mini-figure, and a name plate.

The Maccurtis was released as part of the Zoids: Build Customize line under the same name. The only changes made to the Zoid was to it's packaging. The USA version was Hasbro branded, while the international version was TOMY branded.