The Matrix Dragon (マトリクスドラゴン) is a Dragon-type of Zoid from the fictional Zoids universe. One of over 200 species of biomechanical life forms that provide the basis for TOMY’s model kit, anime, and comic-based Zoids franchise.

The Matrix Dragon is not a standard Zoid; it is a Fuzor-type, also based from a Dragon-type Zoid. The component Zoids of this Fuzor are the Leoblaze, Unenlagia, Mosasledge and Nightwise Blox Zoids. It is considered the opposite of the Chimera Dragon, which also has four component Zoids.

The team was hired to support Savage Hammer in their attempt to wipe out Mach Storm. The team eventually turned on Savage Hammer, using the Dragon to fight both RD's Liger Zero Phoenix and Blake's Buster Fury. In this incarnation of the Matrix Dragon, it was given the ability to breathe fire and emit beams from its wings during combat. Furthermore, the Chainsaw Tail could be used as a sword. It is unknown who the primary pilot of the Fuzor-Zoid is, along with if the Zoid is permanently fused or can split back into its component Zoids in a manner similar to that of the Chimera Dragon (as the Leoblaze would be left unpiloted after it was stolen).

The Matrix Dragon only appeared in two episodes, and was destroyed by the Energy Liger in the second episode. The Fuzor and all four of its component Zoids are assumed to be written off, as they did not appear in any later episodes. Also, the Matrix Dragon was depicted to be larger than Liger Zero Phoenix and Buster Fury, although the models are equivalent in size.

The Matrix Dragon makes appearances in both the Zoids Saga series and the Zoids VS series. In Zoids Legacy, it appears as a wandering monster in the time-space bubble after the player has beaten the game. Matrix Dragon also plays a minor role in Zoids VS II (Zoids Battle Legends, in which it was referred to as Fuzor Dragon, although it's optional Booster part's description reads "The Matrix Dragon's Booster') and Zoids VS III.

The Matrix Dragon was featured as part of the Zoids Scramble release of Zoids Trading Cards. 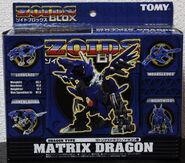 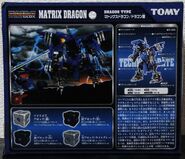 The first four Republic Blox Zoids from the new Blox line were designed to 'fuse' together; the components of the four Zoids can be used to construct the Matrix Dragon.

The Matrix Dragon could only be assembled using the component zoids from Hasbro's Z-Builders line. It was never released as a single kit. It is identical to the Matrix Dragon from the Blox line, which also had to be crafted from component Zoids. A Blox version of a component zoid could be used as a substitute if necessary and visa versa.

The Matrix Dragon was re-released as part of the Fuzors line. The Zoid was moulded with metallic blue armour, white limbs and weapons, orange cockpit hatches, and black Blox. This release contained instructions to assemble the four component Blox Zoids as well as the Matrix Dragon, and contained the stickers for all four Blox Zoids, as well as a fifth, new sticker sheet.

A limited edition of the Matrix Dragon was also issued by TOMY, as a competition prize and giveaway. This version was identical in design to the Fuzors release, but was recoloured in maroon and gold. It was a part of the same contest as the Red Leostriker .

The Gojulox is created by combining Demonshead, Leoblaze, Unenlagia, Nightwise, Diploguns, and Shellkarn. It first appeared in Zoids: Legacy as one of the final fusion options available. While fairly powerful, the fusion was not practical in the game, as it took up all 6 of the players Zoids. The player also had the option to build a Gojulox as one whole Zoid without using six separate Zoids. This option also applies to any fusing Zoids.