The Molga (EZ-006 モルガ) is an Caterpillar-type of Zoid, and one of over 200 species of bio-mechanical lifeforms that form the Zoid race depicted in TOMY's Zoids franchise. It resembles the larval form of the Toho monster Mothra.

The Molga is an early Zoid. The Zoid was initially designed to be a standard infantry Zoid, supporting other early designs, including the Malder and Marder. The Molgas design meant that the Zoid is very well armored for its size, far more than most other Zoids of its size, as well as allowing the Zoid to burrow into the ground.

The Molgas weapons are only average, but certainly enough to let it deal with similarly-sized Zoids. However, while the Zoid is fast and well armoured, its maneuverability is poor, and its handling over rough terrain only mediocre. The Molgas overall performance is rather average, the Zoid being designed more for use in large numbers as a massed force, not individually.

Molga was derived from ancient Wild Zoids domesticated by the ancient Zoidians thousands of years ago.

The Molga was one of the first Zoids created by the Zenebas Empire, appearing in the ZAC 1980s. The Zoid was used as the standard infantry machine of the time, and proved to be more than a match for the early Helic Zoids like the Garius and Elephantus. The Molga quickly became one of the most common machines of the Zenebas army. The arrival of the Iguan in ZAC 2030 eclipsed it to a degree, with the newer Zoid being far more versatile. Despite this, the Molga remained in service with the Empire until its fall in ZAC 2049.

Following the destruction caused by the meteor strike of ZAC 2056, the Guylos Empire resurrected the Molga design to boost its devastated forces. The Molga served the Guylos Empire in the same way it served the Zenebas, as a standard infantry unit. Molgas were used heavily by the Guylos forces in their invasion of the Western Continent, and become one of the most numerous Zoids employed by any faction in the conflict.

The Molga first appeared in Zoids: Chaotic Century as Zoids belonging to members of the Desert Arcobaleno Gang. They were used to attack the Wind Colony in order to flush out the Organoid Zeke. These Molgas were defeated by Van's Shield Liger. They later appeared as the standard infantry-type Zoid of the Imperial Army. Molgas were used en-masse by the Guylos forces, and were usually plowed down in a very Redshirt-like manner. A small group of unique black Molgas were also seen along Royal Heldigunners trying to defend Rudolph from Prozen's forces.

The Molga would see far less action in Guardian Force, appearing in only three episodes: The Zoid Hunters, The Devil's Maze, and A Monster Awakens, where it appeared as the upgraded Cannonry Molga. Wild Molgas would be captured and held prisoner by the Zoid hunters.

Scaled down Molgas (around the size of a person) called Realgas were also used by the Empire. These were used against enemy personnel, and were armed with a sticky, silk-like spray that could be used to immobilise targets. Like actual Molgas, these were often used in large numbers to overwhelm their opposition.

In Zoids: New Century, a Molga was seen in Harry Champ's Zoid collection, but never in combat. Molgas also appeared in as holographic pieces in a board game played by Jamie and Leena in one episode, and as model pieces in Steve Toros' collection.

A group of Molgas appeared in an episode of Zoids: Fuzors, working with other Zoids lead by Marvis. The Molgas proved to be effective against a more powerful Command Wolf and Leostriker, by concealing themselves underground and then leaping up and ambushing them.

Shot Cannon-armed Molgas appeared in Zoids: Genesis where various forces used them to oppose Digald's Bio Zoids. The Molgas' Shot Cannons were rather ineffective against Digald's Bio-Zoids and even though they able to retreat underground, they were often easily dispatched. Nonetheless, they would see use throughout the latter parts of the series, usually as part of the anti-Digald resistance force's defensive fortifications. Notably, multi-colored Molgas are piloted by Muteki-Dan. As with all Zoids, they become markedly more effective once they are outfitted with Metal-Zi bullets. 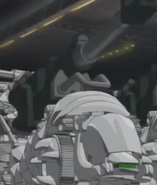 The Slitherzoid was one of the standard infantry Zoids of the Red Mutant army, probably the second most common after the Hellrunner, and appeared constantly throughout the run of the comic. Like many other mutants, many defected and joined Krark's forces.

In Zoids VS II (Zoids Battle Legends), the Molga is one of the four Zoids available at the beginning of the game. It is also used as one of common random monsters in the Zoids Saga series. In these games, variant of the Molga known as Dark Poison also exists. Dark Poison also appears in Cyber Drive Zoids.

In Super Robot Wars K, the Molga was featured as the signature Zoid of the Muteki-Dan. They use the Zoid's Gatlings, Laser Cutters, and back-mounted Shot Cannon, but are most notable for their "ultimate" attack, which is, while somewhat powerful, a "joke" attack, and features the Molga preforming ludicrous feats, such as tripping, tumbling through the air, and colliding with the enemy. Their ultimate attack uses five Molgas, but they are treated as one unit in all other aspects of the game. 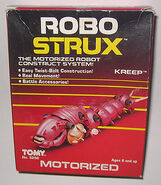 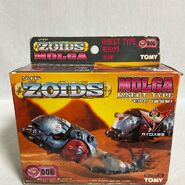 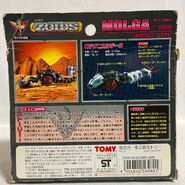 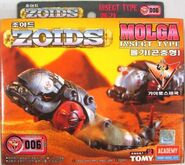 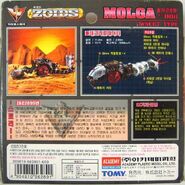 The Molga was released in Japan as part of the Zoids (1983) line. Introduced in 1983, production continued until about 1987.

The Molga comes on three frames along with a small wind-up motor, two separate cockpit pieces, a clear canopy, two small gears, twelve rubber caps, a small chrome silver pilot, and label sheets. The Molga is moulded in maroon and silver, with a red canopy. The head was shared with several other early Zenebas Zoids, including the Malder and Marder.

The Zoid uses a simple wind-up motor for its motion; once wound, the Zoid rolls forwards with a slithering; motion, its entire body flexing. A panel on the Zoids back can be opened to reveal a small missile launcher, while a second panel on the front conceals the cockpit.

The Molga was released in Europe as part of the Spider-Man and Zoids line. It bore the name Slitherzoid and was introduced in 1985-86. It featured new packaging, but was otherwise had no changes to the model.

The Molga was released in the US as a part of the Robo Strux line, under the name Kreep. The Zoid was coloured in rust-red and tan, with a green canopy.

The Molga was released as a part of the Zoids 2 line, under the name Slither. This version was recoloured in silver, chrome silver, and black.

The Molga was released as part of the Zoids (1999) line. It was Introduced in 1999. The colours are dull silver, metallic grey, and dull red, with a green canopy and a blue pilot.

An optional weapon was also released for the Molga, the CP-07 Shot Cannon. The kit consists of a single large cannon, mounted on the Molga's back.

This version was available as a competition prize in Japan. The Zoid came in a white box and is moulded almost entirely from clear plastic (excluding the blue pilot, the black motor, and red caps). 1000 units were produced initially from the first lucky draw. Not long after, the Molga was introduced into Singapore. The Crystal Molga also had a third release in Australia, but had an 1999-style box with a sticker that displayed the Clear Molga.

The Molga was released as part of the Zoids: Build Customize Mobilize line. In North America it was Hasbro branded, while the international version was TOMY branded. The Zoid was identical to the 1999 version, save for the packaging. In Australia, it was included as a bonus with some larger Zoids. The Molga went on sale in England in 2004.

A limited edition version of the Molga was released in 2002, as part of the 'Yuji Kaida' series. This version was recoloured in bright green, blue, and silver, with neon pink caps. In addition, it also included a silver version of the CP-07 Shot Cannon.

This Molga did make a appearance in the Zoids Web Comic.

Another version of the Molga was released as a part of the Genesis line under the name Cannonry Molga or Molga Canory. This version was recoloured in dull green, dull blue, and grey, with an orange canopy. It also included a grey version of the CP-07 Shot Cannon. This version has experienced issues with mould quality.

The Molga was released as part of the HMM series in August 2008. The package includes both a standard-colored Molga and a Cannonry Molga in Genesis colors.

Two new variants were released in September of 2009. The Molga AA (Anti-Air) and the Molga Carrier, colored in light brown and dark grey, respectively.

The Molga was released in 2006 in the Toy's Dream Project Zenebas Memorial Box Set.

A kit used to advertise Takara Tomy's Dark Zoids Army. The kit was released with the Gator's Dark Version included on February of 2008.