The Mosasledge (モサスレッジ) is a Mosasaurus type of Zoid from the fictional Zoids universe. One of over 200 species of biomechanical life forms that provide the basis for TOMY’s model kit, anime, and comic-based Zoids franchise.

The Mosasledge is a Mosasaurus-type Zoid used by the Helic Republic.

The third Blox Zoid, the Mosasledge is capable of rearranging its structure to combine with other Blox or Zoids, primarily Leoblaze, Unenlagia, and Nightwise, and together they can form the Matrix Dragon.

The Savage Hammer team formed a squad consisting of a Unenlagia, Mosasledge and Nightwise. They intended to create the Matrix Dragon Fuzor, but required the Leoblaze owned by Mach Storm to complete the Zoid. Matt's Leoblaze was stolen and re-registered to Team Savage Hammer, and efforts by the characters to have it returned resulted in an unofficial battle between the two teams. During the battle, the pilots of the Matrix Dragon turned on Savage Hammer, using the Fuzor to fight both R.D.'s Liger Zero Phoenix and Blake's Buster Fury.

The Matrix Dragon was destroyed by the Energy Liger, with all four of its component Zoids being written off.

The Mosasledge was featured in Zoids Legacy as a separate Zoid, capable of both limited flight and swimming. Its main purpose was to fuse into Matrix Dragon with Unenlagia, Nightwise, and Leoblaze.

Mosasledge was also featured as part of the Matrix Dragon in the Zoids VS series, but was not a separate Zoid. It's wings and missiles were available as a weapon for some other Zoids, called the 'Mosa Missile'. 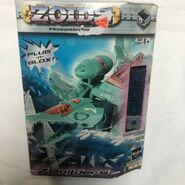 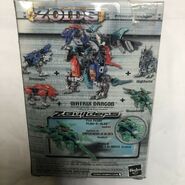 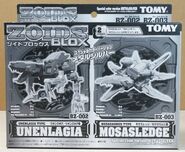 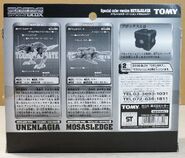 The Mosasledge comes on three frames, along with a frame of connector pegs (that is shared with several other Blox Zoids), three black Blox, one silver Core Blox, a canopy cover, a grey pilot and label sheets. The Mosasledge is molded in aqua green with clear orange eyes and canopy. The Zoid is not motorized, but it is very flexible, and can be manually posed.

The Mosasledge was released in 2001, with production continuing until 2004.

The Mosasledge was released as a part of the Z-Builders line by Hasbro. This version was identical to the Blox version, save for packaging.

The Mosasledge was also released in very limited numbers as a part of the New Pacific Release.

The Mosasledge was released as included in Matrix Dragon of Fuzors line . There were no physical changes to the model. The Zoid also included a custom sticker sheet to reflect its Team Mach Storm allegiance.

A double pack containing Mosasledge and Unenlagia was released as a Special Color Version Metalsilver. The Mosasledge in this pack was recolored in black and gunmetal with dark denim blue BLOX.