The Murasame Liger (ムラサメライガー, Murasame Raigā) is a lion-type Zoid, a race of biomechanical lifeforms from the fictional Zoids universe. The Murasame Liger is the primary Zoid of the protagonist of the fifth anime series, Zoids: Genesis.

The Murasame Liger is a Lion-type Zoid, unique to the Zoids: Genesis fictional universe.

The Zoid's main weapon and most distinctive feature is the Murasame Sword, a large blade on the Zoid's back. The blade is mounted on a swiveling arm, which allows the blade to cover a 300o arc and to swing 90o from the top of the Zoid to either side (similar to the Blade Liger), but only one side at a time, meaning the pilot has to constantly switch the blade's side and position depending on which direction the enemy is attacking from. The sword has the characters '村雨' (pronounced murasame, meaning passing rain) engraved on it near its joints. The weapon is made from Metal Zi, an incredibly strong ancient metal.

The Murasame Liger is fast and agile, its overall performance is comparable to the Liger Zero. To further enhance its performance, the Zoid is equipped with a pair of pile bunkers on its legs that allow it to make sudden high-speed turns.

In addition to its standard form, the Murasame Liger possesses two additional forms:

The Murasame Liger is an ancient Zoid, created during the "Ancient Era" before the "Age of Technology". The Murasame Liger was one of their greatest achievements, able to transform into more powerful forms. This ability was sealed away inside the Zoid's core, and can only be released by a skilled pilot.

The Ancient Civilization vanished, their Zoids forgotten until after the Great Cataclysm that all but destroyed the world, when the Murasame Liger was recovered, and revived.

In the battle story, it is not clear if the Murasame Liger is a specific, unique Zoid or just a Zoid type.

The Murasame Liger and its alternate forms are unique to the Zoids: Genesis anime.

The Murasame Liger was initially found on the seafloor in Mirodo Village, where it was salvaged and refuelled. However, initially, no-one could pilot the Zoid. Shortly after recovering it, the village was attacked by Digald Bio Raptor forces, and Ruuji, a boy who had never been able to pilot a Zoid in his life, was knocked into the cockpit. It was only then that the Zoid activated. Its primary weapon was a large sword made of Metal Zi that was used as the central feature in a shrine in the Village. This sword flew to the Liger, connected with it, and the Zoid revived itself. This sword would prove to be one of only a handful of weapons that were effective against the Bio Zoid threat. However, in a subsequent battle, the village's Generator, a tree-like device necessary for the survival of the settlement, was damaged, forcing Ruuji and the Liger to leave the town in search of a mechanic.

As they travelled, they would see many people being oppressed by Digald, and would eventually become the iconic symbol of the anti-Digald movement (with their flag being crafted to reflect the Liger's three colours, blue red and white). As Ruuji journeyed, he would unlock the power to Evolt, thus enabling him to use the Hayate Liger and Mugen Liger forms, making him one of the most potent pilots in the army. The power to Evolt was an ancient lost technology, which is eventually revealed to be a powerful regeneration device that responds to willpower. It is because of this that the Murasame Liger is able to regenerate it's Zoid Core. After defeating Digald's leader, Jiin, the Murasame Liger would be placed inside Mirodo's Generator, and its regenerative powers would restore the machine, bringing back the village's vitality.

The Murasame Liger features in the game Super Robot Wars K, along with numerous other Genesis Zoids. It is also in Zoids: Full Metal Crash piloted by Schnell, who later lends it to the game's main character, Berg. It does appear in the Zoids Saga series, and is present in Zoids Saga DS, as is Ruuji.

The Murasame Liger made appearances in both the Zoids Scramble and Zoids Card Colosseum releases of Zoids Trading Cards. 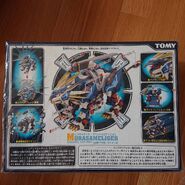 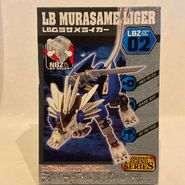 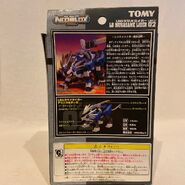 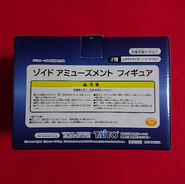 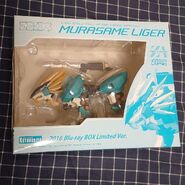 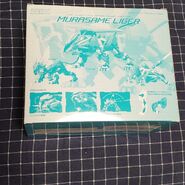 Unlike other Zoids, the Murasame Liger's legs and body are already assembled and held together with screws; in essence the Zoid is already half-built. The Murasame Liger uses a pair of "AAA" sized batteries for motion. Once activated, the Zoid walks forwards with its jaws chomping. The sword on its back has a built-in, spring-loaded action that causes it to spring out and slide to the side, but only to the left side (why it was designed that way is unknown).

The Murasame Liger suffered from poor quality control, a problem exaggerated by the pre-built nature of the model. Murasame Ligers were known to veer sharply to one side, to seize up when walking or simply not walk at all. Because the model was pre-built, these problems could not be easily corrected. The Zoid often would also suffer from poor parts fit, with many pieces readily falling off the Zoid.

The Murasame was released in early 2005, with production discontinued by mid 2005. The Zoid suffered from poor sales (despite being the main character's Zoid), possibly related to its pre-built nature and its inability to swing its sword to both sides.

A TRU exclusive zoid, a limited version of the Murasame Liger recoloured with metallic blue parts replacing the light blue and a lighter shade for its cockpit visor. Additionally, it came with a 10 cm tall Ruuji figure.

Released in 2006, a Tateishi Store exclusive which features parts for Murasame Liger recast in resin. Combined with parts from the original kit, it allows for the construction of a posable Murasame Liger. This model is a little larger and longer than the original, but is not motorized.

A limited edition model only available with the first Zoids: Genesis DVD boxed set. This version was made mostly out of clear plastic with a slight tint, a few pieces being opaque white along with the caps. It is sometimes mistakenly referred to as 'crystal' - crystal itself being a fan term for the limited clear Z-point Zoids.

Given as a prize during the Genesis Z-Point campaign. It features blue colored translucent parts.

The Murasame Liger is the first of the non-scale "Quick Kit" line (released in 2005). It sports 29 snap-together pieces and is much smaller than the original model. Its designation under this line is "QK-01".

The Murasame Liger is one of several Genesis-line Zoids to be made into miniature key-chain attachments. The Liger is the only one of the figures that has a moving part, as the ring around the Zoid midsection (onto which the Zoid's sword is attached) is not physically attached to the Liger and can therefore be pivoted (though the ring cannot be removed from the Liger, and the sword is fixed in position relative to the ring).

The LB Murasame Liger was the second Zoid in the Legends Series. Styled after the Genesis Murasame Liger, the LB is equal in size to other Neo-Blox Zoids.

The model comes on five frames along with three Neo-Blox modules, a clear canopy, a sword, a frame of connectors also included with several other Neo-Blox and a chromed gold pilot. Two of the frames were first used on the Brave Jaguar, while the feet were seen on Stegoganzer. The colours are based on those of the Genesis Murasame Liger, but lack the gold details.

A recolour of the LB Murasame Liger was included with the Valkyrie Caesar kit. This version was recoloured in black and white with an orange canopy. The kit also included similarly recoloured versions of the Bravejaguar and Hardbear

Released as a contest prize in Japan, 2006. Only 10 units were ever produced.

Released as a contest prize in Japan, 2006. Only one King of Flexible Mobile Murasame Liger was ever produced.

A test shot for the Murasame Liger. The blue is very metalic.

A version of the Murasame Liger designed to be controlled by a remote control, most likely similar to that of the CP-16. The prototype was seen as being incredibly small and in grayscale. It never advanced beyond the prototype stage.

Murasame Liger was released as a small statue in the Zoids Amusement Figure line, a series of small static figures made of a breakable (clay?) material.

The Murasame Liger was announced to appear in the Zoids: Aggressive series.

The Hayate Liger and Mugen Liger are similar to the Murasame Liger, with the Hayate sharing the same pre-built body. The Blade Hawk and Sauro Knight limited edition models were designed to combine with the Murasame Liger to become the Shinobi and Knight custom respectively.

The Murasame blade was released separately in limited numbers with the ability to glow in the dark.

A rare resin kit (often mistranslated as "shark Liger", as online translators think the same in Murasame is 鮫 shark, rather than 雨 rain) is composed of custom connectors which allows one to mount all of the GZ power up parts to the Murasame Liger kit. The power up parts are sold separately. 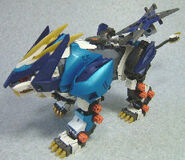