The Neptune ( ネプチューン) is an alligator type Zoid, a race of biomechanical lifeforms from the fictional Zoids universe.

After the first Death Saurers were deployed, the Republic was forced to retreat to the central mountain range, where they created a new armed force. The Neptune was part of this new armed force, and was used for amphibious combat and support roles for larger zoids. Because the Neptune fought in the mountains, it was equipped with transparent "bullet proof" armor to make up for the limited moving space.

In ZAC 2043 the Zenebas Empire successfully captured the Helic Republic capital using the new Death Saurers. Being defeated, the Republic fled to the central mountain range. In the mountains, the Republic reconstructed their army with small Zoids and used guerrilla warfare to fend off the pursuing Zenebas forces. The Neptune was part of the new army, along with the lightweight Battlerover and the heavier Megatropos. The Neptune was used to provided support for the Megatropos, and continued to with great effect. 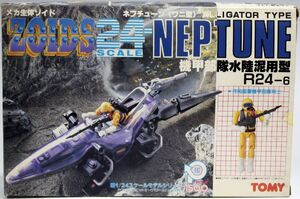 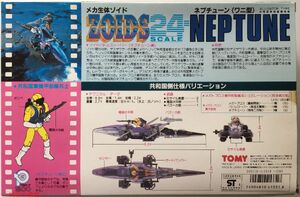 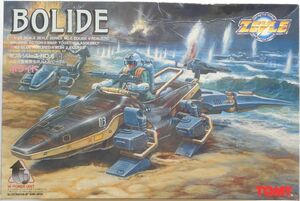 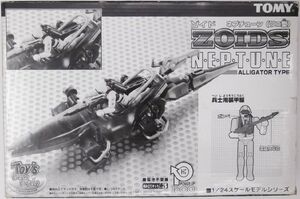 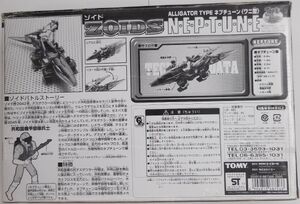 The kit was released in 1988, as part of the 24-Scale Zoids line. The kit is larger than a Power Up 1000, wind-up, and possesses one pilot wearing an underwater suit. This Zoid, like his fellows Megatopros and Battlerover, has a big translucent flat part covering the head and most of the body.

The kit was released in Japan in 1992 with the Zevle line, almost identical to the original except for the color scheme, and the pilot that has to be painted and built. Kit was named Bolide (ボライド).

The kit was released as part of the Toy's Dream Project line and was completely identical to the original.