The Omega Rex (オメガレックス, Omega Rekkusu) is a Tyrannosaurus-Type Zoid, one of over 200 species of biomechanical lifeforms depicted by TOMY's Zoids model, toy, and media franchise. It is the evolution of the Death Rex.

The Omega Rex is a very large Zoid. Compared to other Zoids in the Zoids: Wild series, it is an XL-sized Zoid.

It begins to take form in episode 22, where it is revealed that Frank Land is building the Zoid in secret. While Dr Land had been working under the Empire, his goal was the completion of this Zoid. As such, when the Empire learn of this, he betrays them.

The Empire and Republic stage a massed assault on the incomplete Omega Rex, and in episode 25 Dr Land is forced to launch it in an incomplete state.

The Zoid retreats and undergoes repairs and maintained to bring it up to full operational capability. It is sortied in Episode 28, equipped with full weapons and able to fire its Charged Particle Cannon an unlimited number of times.

After engaging the Genospino in Episode 29, Hannah is sidelined as the Omega Rex's pilot.

Newly rejuvenated, Frank Land instead takes charge, and sends it into the Empire's capital. Unlike Hannah, he has no restraint using the Charged Particle Cannon. He initially uses the weapon to burrow through the ground, bypassing all defensive lines set up to engage him. He then fires the weapon in all directions rapidly, laying waste to everything inside.

The Genospino is hastily deployed, along with a new "Legendary Weapon". The Rising Liger equipped with a Gravity Cannon. Additionally, Dr Borman devises a device called a "Deflector", which can cut off the pendant unit's power supply.

The Sonic Bird is chosen to snipe the pendant unit, as it's only window for attack is immediately before the Cannon fires.

The Genospino is greatly damaged in this fight, but otherwise the protagonists are able to defeat the Omega Rex. The final blow being a Gravity Cannon shell dropping the Zoid into the ocean.

Frank Land and the pendant unit go missing, but the Omega Rex returns to the "True Empire", where it is slowly repaired.

It is completed in episode 40, where the "True Empire" use it to push back the Republic and Empire forces approaching their base.

This time Aldridge is the pilot. He's unable to use the Charged Particle Cannon, but the Zoid is still large enough to be a serious threat.

It takes the deployment of Leo Conrad equipped with special "Long Buster Cannons", and knowledge from Hannah (who's no longer with the True Empire) to stop the Zoid.

The Omega Rex then falls into the hands of the combined Republic and Empire.

Like many Zoids that appear as major antagonists, the size of the Omega Rex in the anime is scaled up dramatically from it's model kit counterpart. 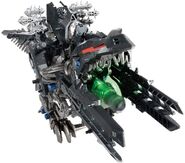