The Orudios (オルディオス) is a Pegasus-type Zoid, a race of biomechanical lifeforms from the fictional Zoids universe.

The Orudios is a Pegasus-type Zoid created by the Helic Republic. Like many of its contemporaries, it has an almost fantastical design, more organic than technological - the actual creature it's based on is likely the alicorn, a mythological animal with the body of a pegasus and the horn of a unicorn. Unlike most Zoids, there's no natural Pegasus-type Zoid on Planet Zi. Instead, it use a synthesized Zoid core combining the genetic data of a horse-type with a dragon-type.

One of the largest flying Zoids ever, the Orudios is also one of the fastest. Despite its high speed, it is agile for its size and rather well armed, equipped with a pair of powerful armor-busting electromagnetic beam cannons and numerous other weapons. The Zoid's most noticeable weapon is the massive Thunder Blade mounted on its head. Designed to ram and impale opposing Zoids, the blade is capable of penetrating even the thickest armour. This is a definite advantage, given the role that the Orudios was first designed for - to defeat the apparently invulnerable Gilvader.

The Orudios made its debut in ZAC 2054 as part of a desperate Helic gambit to stall the attack of the Gilvader force.

The first Orudios was sent to destroy one of the Gilvaders, despite the larger Zoid's advantage in everything but agility. Reflecting that the only possible weakness he could exploit was Gilvader's pilot, the Orudios' pilot took his Zoid into a successful suicide dive, impaling the Gilvader's head and taking them both out of the sky. The Orudios self-destructed afterward, leaving Emperor Guylos with no knowledge of the Zoid that had defeated the 'unstoppable' Gilvader and false intelligence of far more Orudios than the Republic actually had. He held back the Gilvader force's attack, giving the Republic time to get the Orudios into full production and mount a proper defense.

The Orudios served with the Helic army for the remainder of the war, facing off against other Guylos]] units (including its rival, the Gungyarados). However, the Zoid was wiped out (along with most of the Helic army) during the ZAC 2056 meteor disaster[11], and has not been seen in fanbook or battle story material since outside of flashbacks.

The Orudios' sole media appearance is in the Game Boy Color game Genobreaker's Story, where they appeared as "wandering monsters". 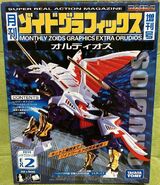 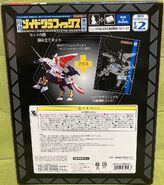 The Orudios is a part of the Grade Up Series of Zoid kits. Due to the Orudios' wings, the Zoid can only mount the GU-02 Pulse Cannon and GU-03 Eye Flasher.

The Orudios kit comes on seven frames, along with a battery-powered motor, a frame of gears, a small gear on an axle, thirty-six rubber caps, a small chromed pilot, and label sheets. The Zoid is moulded in white, blue and red, with chrome gold parts.

The Orudios uses a single AA battery for its motion. When activated, the Orudios walks forwards at a steady pace. A second switch on the Zoid's back activates additional features. In addition to walking, the Zoid's wings flap, while its head raises and lowers, and the power connector spins. The jaw and cockpit can be manually opened and closed, and the tail can be raised or lowered.

The Orudios was first released in 1989 and had a relatively short production run.

A chromed version was also released.

The Orudios was re-released in 1995 by Kenner as a part of the Technozoids line, under the name Evil Pegasus[12]. This version was recoloured, with the white and blue replaced with black and dull grey respectively. There were no physical changes to the design.

On November 2008 Tomy released the kit as part of the Zoids Graphics EX line. It contained a booklet with new battle story information. No major difference from the original kit were noted.