Planet Zi is a fictional planet in the Zoids universe. Zi is located 60,000 light years away from Earth[1], directly opposite its position in the Milky Way, and is home to the biomechanical lifeforms called Zoids.

Zi contains several continents, such as Nyx, Europa, Delpoi and the Eastern Continent.

In most timelines, Planet Zi has two moons.

Below are characteristics of the Planet as mentioned in the Zoids Bible Promotional Zoids Prints:

In the older battle story, Zi had three moons. Life evolved on Zi, naturally developing into biometallic life. Original Zoids developed into dinosaur forms, but environmental changes drove the Dinosaurs to extinction on the planet's surface, allowing mammal Zoids to rise. around this time, the Ancient Zoidians evolved as well. The Zoidians would later discover that several types of Dinosaur Zoids survived underground.

The Ancient Zoidians learned to domesticate Zoids, and eventually learned how to extract their cores and implant them into artificial bodies. Originally divided into clans, the Zoidians eventually fromed two mighty empires: the Zenebas Empire and the Helic Republic. Some time after this the Globally III, a large spaceship from Earth, crashed on the planet Zi, landing right on the border. Both superstates would lay claim to the survivors, incorporating their people and technologies.

The Republic would battle the Empire time and again, both the Zenebas and later the Guylos Empire.

In ZAC 2056, a comet struck one of Zi's moons, shattering it. The shards rained down onto the planet, causing massive destruction; the Central Continent broke into three pieces and large parts of Nyx sank.

Chaotic Century was set some thirty-three years after this disaster (in 2099), running parallel to the new battle story for some time. It deviates from the battle story, and as seen in the picture opposite, takes place entirely on the Western Continent (referred to as "Eupora" by Prozen in episode 7), thus moving the location of a few landmarks such as Red River. Furthermore, the actual location of the continent may be different, as New Helic City appears to be close to the North Pole (as, in Zoids: Chaotic Century Episode 17, the aurora emanating from the North Pole is able to affect New Helic City's communication), which would not correspond to the Western Continent, which is largely below the equator. It must be stressed that there are many possible explanations for this- as both this comment and the map were only referred to in passing, and as such were probably not scrutinized by the series' creators.

While not explicitly stated, there is evidence that suggests that New Century takes place on the same timeline as the first two series, albeit in the distant future, as the ruins of the Gravity-Cannon-equipped Ultrasaurus are found in the Gurrill Plateau, the same place where the finale of Guardian Force took place. Further supporting evidence stems from the Charge Particle Cannon in the Backdraft Group's possession appearing similar to the Death Stinger's tail and the common use of technologies that did not exist prior to Chaotic Century.

While Zoids: Fuzors takes place on Planet Zi and still has two moons, the show almost never refers to the regions beyond Blue City, other than to give some random location names in passing (some of which are inconsistent throughout the series). Aside from mentioning that these names don't match with the names used in other series, since Fuzors is set entirely on the Eastern Continent (which was rarely mentioned in any other media), there is no useful information with which to describe the overall geography of the Planet Zi that appears in the Fuzors timeline.

In the Genesis anime, there was an apocalyptic upheaval on Planet Zi some time in the ancient past. Thousands of years before the events of the anime series, the whole planet shook. The planet's axis was moved, and what were once tropical landmasses became frigid wastelands. The continents broke up and the seas became turbulent, while volcanoes erupted en mass, resulting in the total reformation of Zi's surface.

The planet became inhospitable, and the once-great civilization that had thrived there was annihilated. To preserve the last relics of their technology, they built Sora City, a giant airborne colony which remained operational after the great change (dubbed by some as the "God's Fury"). They initially set about making the surface habitable once more, and to do so built the Generators, massive plant-like devices that stabilised the land, water, and atmosphere and produced the Zoid-fuel Reggel.

However, it took many decades to build the first one, and several more for each one after that. Even after they were built, it would be another century before they actually became operational. In this time, the people of Sora city initiated birth control policies and decided to live perpetually in their flying city. Due to this, the technology on the surface of Zi is incredibly low, far behind what would be seen in every other series (with a few exceptions, as Sora City was not entirely cut off from the surface and had ties with Digald).

The anime series takes place on only one continent, but Ron's comments indicate that there are more. Notably, the aforementioned Zoid energy source, Reggel, is a significant break from the Chaotic Century timeline, which used the Zoid Eve to power their Zoids. While some speculate the "God's Fury" was a natural (or divine) occurrence, others (such as Ron) promote the idea that it was man-made and that the warring of at least two forces, each lead by a Gil Dragon, was to blame for the cataclysm. It should also be noted that only one moon is shown during the Genesis timeline.

Unlike the previous series, Zoids Wild is not set on Planet Zi, and is instead set on "Ferroterra". The main cast visit many locations. A common joke through the series is moving into strange villages that each have an identifiable quirk. These include a village of large hats, a butt-slapping village, a con-artist village, and so on.

Several of the important locations are: The "Rural" Village where Arashi and his family hail from. The Ancient Ruins where Master Bug makes his home. The central Volcano near the Dark Metal Empire. Gigaboss's throne room.

As few of these location are revisited, Greta is crucial to the main party. She sends home messages or money on behalf of the party.

Despite the vast areas explored by the main party, it's revealed to be only a tiny portion of the world. Quade's words that the "World is vast" is backed up late in the series by Arashi's Father, who even describes the Dark Metal Empire as a small part of the world.

Zoids: Wild ZERO is set on Planet Earth. In the 21st century, a great upheaval called the "Zoids Crisis" happened. Zoids that had been buried underground awoke, and the planet was reshaped. Earth became inhospitable and humans were forced to migrate away from Earth.

After a long time humans made their way to Planet Zi. However, as Zi neared the end of its life the population intended to migrate back to Earth, where they had come from in the distant past.

Earth itself was still not hospitable to the people from Zi, and as such it was intended to perform terraforming to improve it prior to arrival. As it was to make earth more like Zi, this was called Zi-Forming.

However, the Zi-Forming failed. In transit there was a mutiny and a science vessel was sent through a time-space warp to the 21st century. Their Zi-Forming device (Regeneration Cube) activated prematurely, causing the Zoid Crisis itself (a time paradox).

Approximately a century later the migrant ships arrive on Earth.

Like in Zoids: Wild, Zoids on Earth can be dug up, however there is a complication. Zombie-like Zoids called Jamminga roam the ruins of past civilisation and regularly interfere with day-to-day life outside of major settlements.

Additionally, because of the failed Zi-Forming, the 1st generation migrants from Zi are unable to breathe Earth's atmosphere easily without the use of a mask. Subsequent generations had adapted to Earth's environment and can move freely without masks.

In Zoids legacy, the terrain is warped by ZOS reactions. While notable events from various anime and video game timelines take place in Legacy, the locations and geography generally are not retained. The map is a projection of the world, such that going off one side will make the player come back on the other. From the dialogue in the game, North, South, East and West, are Up, Down, Right and Left on the map (respectively).

Terrain can only be crossed by certain transport Zoids. A Gustav can only traverse ground, such as desert sand or forests. Shallow water (light-blue area) can be traversed by a Hover Cargo, while Deep water (dark-blue area) can be traversed by a Dragoon Nest. A Whale King can fly over any terrain. Each successive transporter can also cross the terrain of the previous one. (listed in order).

Some noteworthy locations in Chaotic Century are as follows:

Many locales from Chaotic Century are revisited in Guardian Force, most notably by Hiltz in the Death Stinger. Among the places he destroys are the colony at Mt. Iselina, New Helic City, the Jail where Rosso was previously imprisoned, and various other small towns and colonies. Other revisited locations include the Gurrill Plateau and the Valley of the Rare Hertz, where the Zoid Eve is revealed to be located. New locations include the Pellemdon Islands, site of some ancient underwater ruins, and Windeen Lake, location of the (slumbering) Ultrasaurus.

Though most events take place in vague locations, some revisited locations include the Gurrill Plateau, the location of the Royal Cup (whose finish line is a wreck of the Gravity Cannon-equipped Ultrasaurus), and a Storm Sworder launch site that looks identical to the one used in Chaotic Century. Other areas include Romeo City, where a Gun Sniper store is located, Temps Town, the location of a tournament that is never actually featured due to the Blitz Team being delayed by a criminal gang, and Mt. Iselina, where Brad Hunter spotted and chased down the Shadow Fox in his Command Wolf.

Almost all of the series takes place in or near Blue City, but other locations mention include Rose City, Keel Town, Easy Town, Brown City, and various other locations. None are recurring nor described in detail, and as such, none are of any geographical significance.

Some noteworthy locations in Genesis are as follows:

Stories of Zoids franchise have not taken place exclusively Planet Zi. Other planets that have either served as a setting for Zoids medias or have been given significant mention include:

The anime series Zoids: Wild is set on planet Earth, after a single Zoid Core arrived there in the past.

The subsequent anime Zoids: Wild ZERO is also set on Earth, and explains a time/space warp involved in sending Zoids to the planet.

Planet Earth is mentioned several times in various Zoids media. In Chaotic Century, Raven is informed humans on Planet Zi actually came from "the blue planet" and may go back some day. In the Battle Story, the Globally III spaceship originated from Earth, as did the Celeste from the UK Zoids comic. A story for the Zoids2 line was slated to take place on Earth, hence the slogan "monster machines that stalk the Earth" used on the line's boxes. 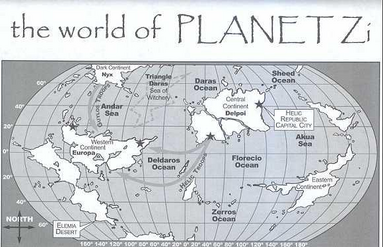 the world of PLANETZi
Add a photo to this gallery

The UK Spiderman and Zoids comics take place on Zoidstar and its moon.

While 'Planet Zoid' was one of the early names for Planet Zi, the name Planet ZOIDS is used for the setting of the 2010 Concept Art series, Zoids SS manga and ZOIDS Material Hunters Game.

Similarly, while Planet ZOIDS has Republic and Empire armies, they are not the Helic or Guylos factions from previous stories. They are simply Republic, sometimes called the Democratic Republic, and Empire.

Retrieved from "https://zoids.fandom.com/wiki/Planet_Zi?oldid=70832"
Community content is available under CC-BY-SA unless otherwise noted.