The Pteras (RZ-010) (プテラス originally named the Puterasu) is a Pterosaur-type of Zoid, a one of over 200 species of bio-mechanical lifeforms that form the Zoids race depicted in TOMY's Zoids Franchise.

The Pteras uses Magnesser Wing technology to provide lift and propulsion. These wings use magnetic repulsion to lift the Zoid and move it once airborne. This system makes the Pteras very easy to learn and operate.

The Pteras' weapons load primarily consists of missiles for both air and ground attack. If its missiles are depleted, the Zoid is left with a single small cannon for defense, making it rather vulnerable in longer engagements. Its speed and agility is somewhat lacking, when compared to most other airborne Zoids. However, the Pteras does have some ground capability.

The Pteras first appeared in the early ZAC 2030s, created to replace the older Glidoler and Pegasuros. An early product of human technology on Zi, the Zoid was considered quite advanced for its time. It was Planet Zi's first dedicated fighter aircraft and could easily outperform the Zenebas Empire's much slower Sinker and Saicurtis Zoids. As the Republic developed more powerful fighter aircraft, such as the Raynos, the Pteras began to be used more as a bomber-type aircraft against land and sea Zoids.

After the meteor strike in ZAC 2056, many powerful flying type Zoids such as the Raynos, Orudios, etc were brought to the brink of extinction. When war on Planet Zi resumed in ZAC 2099, the Pteras was once again used as a mainstay in the Republic's air force. When the Storm Sworder was introduced in ZAC 2100 it would take the Pteras' place as the Republic's primary fighter craft, but the development of the CP-06 Bomber Unit kept the Pteras relevant, capitalizing further on its role as a bomber.

In Zoids: Chaotic Century and Guardian Force, the Pteras is the standard aerial Zoid of the Republic's military. Many of the main characters all fly a Pteras at one stage or another, and the design remains in service after the creation of the Storm Sworder.

Several variants of the Pteras can be seen over the course of the anime, including a recon model known as the Pteras Radome with a large radome on its back, and a high speed stealth version known as the Silver Pteras, with a black color scheme and two large gatlings mounted under its wings. Both customizations are used rather frequently in Guardian Force, with the Radome being deployed as surveillance aircraft, and the Silver Pteras for combat purposes.

These two models were seen repeatedly in the later episodes. A particular Pteras Radome kept track of the Death Stinger after it emerged from the ruins of the Hammer Kaiser in episode 25. Shortly after, once the Death Stinger reached New Helic City, several variants fitted with the CP-06 Bomber Unit were sent to stop it, though their efforts proved futile. Many more Pteras were stored in the Ultrasaurus and would aid the Guardian Force in their final struggles against Hiltz. Pteras Radomes, for example, would assist in monitoring the test-firing of the Gravity Cannon in episode 28, and later be deployed to examine the happenings within the Ancient Zoidian city.

Throughout the series, many of the Pteras tend to be inconsistent with their coloring and design. On numerous occasions, Pteras with a gold-white-blue color scheme appear in both Chaotic Century and Guardian Force, featuring yellow wings, feet, and headgear.

In Zoids: New Century, Jamie Hemeros's first Zoid is a Pteras equipped with a CP-06 Bomber unit. He was very fond of it (the only character other than Bit and Vega to show these feelings), often yelling "My Pteras!!!" when it was damaged or abused. The Pteras is later traded for a Raynos, without his consent.

Oscar, Jaime's father, also piloted a Pteras, which had the gold, blue and white color scheme seen on some Pteras in Chaotic Century and Guardian Force. However, the animation model changed slightly, and there were fewer gold parts on Oscar's version.

In the new century DVD's special features the Pteras is referenced as a Ptera Striker, even though it was called a Pteras in the anime. This reflects the name change in the NAR release of the Pteras, however in these special features 'Jamie' is called 'Jimmy', showing naming inconsistency common with different Zoids media.

A single Pteras appeared in Zoids: Fuzors, working with Marvis. The Zoid was used to provide him with an escape route after his Shadow Fox was disabled.

The Zark was one of the more numerous Zoids in the Red Mutant army, being one of their few flying types. The Zoid was very successful against the Blue Zoid's Cosmozoid and Terrazoid types, but proved to be ineffective against the larger Blue Zoids. A number of them also defected to Krark's army, but were destroyed by the Black Zoid.

Pterases are a common sight with the Republican Army, appearing as the standard aerial Zoid throughout the series. In addition, a reconnaissance variant, Scout Pteras Gemini, appears on multiple occasions. This variant is formed by the side-by-side bodies of two Pterases, supporting a central unit and radome. 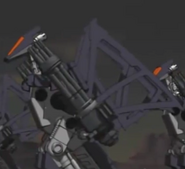 The Pteras appeared in both the Zoids Saga Series and in Zoids VS III. An additional variant of the Pteras design that features in the Zoids Saga series of Game Boy Advance games is the Pteras Radome, designed to act as an Airborne Warning and Control System unit. This variant also appeared in several later episodes of Guardian Force. Pteras was also featured as one of the few flying Zoids in Zoids VS III, along with Redler and Storm Sworder.

The Pteras was featured in the first two releases of Zoids Trading Cards: the Original Battle Game and the Trading Collection Cards. 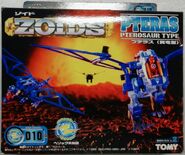 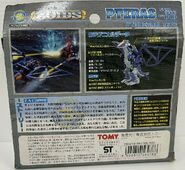 The Puterasu comes on four frames along with a small wind-up motor, a clear canopy, four rubber caps a small chrome gold pilot and label sheets. The Zoid is moulded in dark blue and light grey with an orange-colored canopy. The Zoid's head is shared with the Stealth Viper.

The Zoid uses a simple wind-up motor for its motion; once wound, the Pteras will walk forwards and flap its wings. The head, weapons and outer wings can be manually positioned.

A silver chrome version was released as a contest prize item. It is one of the very few official chromed Zoids from this line.

The Pteras was released in Europe as part of the Spider-Man and Zoids line. It bore the name Zark. The model was moulded in dark red and silver/grey, with a red cockpit and a silver pilot.

The Pteras was released in the U.S. as part of the Robo Strux line, under the name Rado. This model was identical to the Zark, the only change was to the packaging, which featured the Robo Strux logo.

On several box arts, the Rado appeared black and grey. This version did not reach production.

The Pteras was released as part of the Zoids (1999) line, and was introduced in 2001. The Zoid was light blue and grey.

There was one upgrade kit released for the Pteras, the CP-06 Bomber Unit. This upgrade was moulded in a slightly darker blue than that used on the Pteras, and consisted of two large bomb units attached to the legs, and two missile units mounted on the wings.

A second, limited release version of CP-06 was released. This was moulded in a dark red which closely matches the Zark's colour.

The Puterasu was released as a part of the Zoids Graphics line.

A HMM 025 RZ-010 Pteras Bomber Jamie Ver. was released in May 2011 for 4,500 yen, it came with a figure of Jamie Hemeros and bomber equipment. It was re-released in 2013. In October 2020, Kotobukiya will reissue this kit as the RZ-010 Pteras Bomber Marking Plus Ver. for 4,800 yen. This reissue will come with a normal pilot figure, a water slide sticker sheet, and a bonus colorless clear canopy.