The Red Horn (EZ-004 レッドホーン) (also stylized as Redhorn) is a Styracosaurus-type of Zoid, and one of over 200 species of bio-mechanical lifeforms that form the Zoid race depicted by TOMY's Zoids franchise.

The Red Horn is intended to oppose the Gojulas and other large Helic Republic-created Zoids. The Red Horn, while relatively slow compared to later designs, possessed sufficient speed for the era of its creation, and boasted a considerable arsenal of weapons. The Red Horn’s weaponry allows it to bombard enemies from a distance, while its horn allows it to engage them in melee combat.

The Zoid is heavily armored, and is resistant to the weapons commonly mounted on smaller Zoids. The Red Horn also boasts a considerable sensor array, with a sophisticated radar system mounted in the four “horns” that form its crown. The Zoid is also amphibious and, despite its bulk and seemingly clumsy design, rather adept at operating in rough-terrain and mountain combat conditions.

The Red Horn was the first large Zoid deployed by the Zenebas Empire, first appearing in ZAC 2029. The Zoid was designed in response to the advancements in Zoid technology made by the Helic Republic; it was superior to the Mammoth and Bigasaur and the equal of the Gordos. Only the Gojulas was superior to it, and even then the Red Horn could defeat it by keeping out of range of the larger Zoid's weapons.

A potent machine, the Redhorn was used to spearhead assaults as well as serving as an artillery platform. Its extensive sensory and communications system also made it a premier command unit. Many Zenebas aces gained their early combat experience in the machine, particularly Gambino, the leader of one of the Empires’ elite units. The Red Horn served with the Zenebas Empire right up until its fall in ZAC 2049. The Guylos Empire acquired the design from Zenebas refugees, and modified the design to develop the Dark Horn.

After the Meteor Strike of ZAC 2056, the Guylos Empire lost the ability to create the Dark Horn. To compensate for this loss, they reverse-engineered the Dark Horn design, returning to the Red Horn. The new Red Horn served with the Guylos Empire, and was used to spearhead their landings on the Western Continent in ZAC 2099. Even though the Red Horn was one of the oldest designs in service, it remained effective against its Helic opponents.

To further supplement their capabilities, the Empire developed a new weapon for the Red Horn; the CP-03 Beam Gatling Cannon. Based on the Dark Horn's Hybrid Vulcan but using conventional power sources, the weapon substantially enhanced the Red Horn's firepower and capabilities.

Late in the war, the Republic captured several Red Horns and pressed them into their depleted ranks. These Zoids were nicknamed "Green Horns" because of their color scheme.

The Red Horn first appeared in Zoids: Chaotic Century; a Red Horn piloted by Rosso was the first large Zoid that Van ever fought. Later in the series, Red Horns frequently appeared as the standard Zoids of the Guylos Empire's armies.

Despite their heavy arsenals and armor, Red Horns proved to be rather incapable against other Zoids, specifically those piloted by the heroes. Often, weaker Zoids would be able to effortlessly dispatch them; a case of the Stormtrooper Effect in action. This becomes especially obvious in Zoids: Guardian Force.

Red Horns also appeared in Zoids: New Century, usually as miscellaneous Zoids in battles. In episode 5, a team known as the 'Red Fire Team' used Red Horns while Jack Cisco (temporarily) helped them in battle, but the Red Horns were disposed of quickly, despite winning their battle, and Jack left them.

Several Red Horns appeared in Zoids: Fuzors. The most notable was one piloted by Gregor the Impaler, one of the best pilots in the Zi-Fighter Championship, which held its own against the Liger Zero Phoenix until being taken out by Roger's Genosaurer. Oddly enough, Gregor's Zoid (and all other Red Horns in Fuzors) had neon green Dark Horn-style power plants and eyes.

In the UK Zoids comic, Redhorn the Terrible was the leader of the Red Mutant army. Redhorn lead the initial wave of Zoids who invaded Zoidstar, aiming to wipe out the Blue Zoids. Redhorn was responsible for converting Mammoth the Destroyer over to the Red Zoid cause, as well as creating the Terrareds and Tarantulons.

Redhorn's arch enemy was Zoidzilla, but he also saw Krark as a rival for his rule. Possibly his most dangerous opponent was his own lieutenant, Mammoth. Redhorn was lured by Mammoth into a trap, where he was apparently destroyed by Zoidzilla and Krark. However, unbeknownst to all, his android Mindrider survived. Mammoth used this as an opportunity to take control of the Red Mutant army.

Some time later, Redhorn found Red Scavenger, who recreated his Zoid out of the wreckage of the old one, making him more powerful than before. In the final issue of the Zoids comic, Redhorn destroyed Mammoth and reclaimed control of the Red Mutant army.

In the ZOIDS Annual, a Bluehorn is mentioned. He was seen in another issue of the comic, on the Blue Moon. It is Redhorn before mutation, colored blue, like the Robo Strux Brutox.

A Red Horn variant appears in TOMY's Zoids Web Comic. The Greenhorn is a Republic-operated Zoid.

The Red Horn is featured in both Zoids Saga and Zoids VS. It plays a slightly larger role in Zoids VS II (Zoids Battle Legends), where it is piloted by Rosso during the first battle of the Chaotic Century / Guardian Force Battle Mode. Several variants are also available, including Red Horn Old, Red Horn BG, and Green Horn, along with several Dark Horn variants.

The Red Horn was featured in three out of the four Zoids Trading Cards releases, all except Zoids Scramble.

Redhorn the Terrible Box art (back) 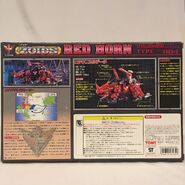 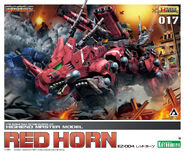 The Red Horn kit comes on four frames (one of which is a weapons frame also shared with the Death Saurer, Dimetrodon and Sabre Tiger), along with a battery-powered motor, two different semi-transparent canopy covers, sixteen rubber caps, three small chromed pilot and label sheets. The Red Horn is molded in maroon and black, with silver weapons, and smoke-colored canopies.

The Red Horn uses a pair of "AA" sized batteries for motion. Once activated, the Zoid walks forwards, its jaws chomping while one of the weapons on the back rotates. One of the other cannons can also be manually rotated and positioned.

Like several other Zoids of the time, the Red Horn could use a number of different optional weapons that were included in the Empire Customise Set.

The Red Horn was released in the UK and Europe as part of the Spider-Man and Zoids line. Introduced in 1985-1987 it bore the name Redhorn the Terrible. The model is identical to the Japanese version, save for the packaging and English language instructions. "Redhorn the Terrible" is one of a few Zoids that can be found "Made in France".

The Red Horn was released in the U.S. as a part of the Robo Strux line, under the name Brutox. This version had a different colour scheme; the red parts were light blue, the grey was silver, the weapons were chrome silver, and the canopies red, but the pilots remained silver. The stickers were the same as the OJR ones, with Zenebas insignia.

The red was a darker colour, the canopies were green, and the pilots were a flat blue colour. The motor was changed to work off a single AA battery with no loss of performance. The battery lid was also modified to have a screw-down cover, rather than the clip-down one of the original.

TOMY also released an upgrade kit for the Red Horn, the CP-03 Beam Gatling Cannon. The cannon mounts on the Red Horn's back, and is attached via a coiled spring to the motor, causing the cannon's barrels to spin as the Zoid walks forwards. The CP-03 is copied from a frame included with the original Dark Horn.

The Red Horn has remained in production for the last few years. Within the line, there is a degree of color variation, with some later production samples being closer in color to the 1983 version.

Several chromed versions were released by Leoshop of Taiwan.

The Red Horn was released as part of the Zoids: Build Customize Mobilize line. In North America this was Hasbro branded, and went on sale in 2002. The only changes were to the packaging.

The Red Horn was released as part of the Hasbro Action Figures line. It featured an oversized Gatling-Style gun that fired up to nine projectiles via a spring loaded launcher.

The Green Horn was released in 2002 in Japan as a Yuji Kaida Limited. It differs from the standard Red Horn in its coloration; the red and black parts are different shades of green and the canopies are orange. The Greenhorn is actually a Republic Zoid, and is believed to have been captured and modified by the Helic Republic.

Promotional photos and the associated webcomic originally showed the Greenhorn equipped with the Blade Liger's CP-12 Attack Booster upgrade. This was removed before the model went into production. Also the Green Horn makes an appearance in the Zoids VS series, the CP-12 AB is equipped when acquired.

The Green Horn served as a precursor to the Mad Thunder as it had the prototype Anti-Charge Particle shield. It was reserved for testing purposes and not fielded in combat.

The Red Horn was released as a part of the Evo Drive line designated as ZED-03.

The Clear Redhorn was only available as part of the Z points promotion in Japan. A total of 50 Z points were required to send off for the Clear Redhorn and only 300 were released. But a second release was made in Singapore not long after the Z-point campaign, which made this Zoid easier to find. Unlike normal retail Zoids which came in boxes with images of the Zoid on them, the Clear Zoids came in a plain white box with just a label on the front stating what the contents were. The Clear Redhorn is made entirely out of clear plastic, only the motor, pilot and caps are colored. Due to the brittle nature of the clear plastic, great care had to be taken when assembling the Zoid.

A limited edition version of the Red Horn, popularly known as Bone Horn among fans, was released in 2005 as an exclusive to the Ueno Museum's 'Dinosaur Expo 2005'. This version of the Red Horn was primarily bone-white, with dark coffee colored parts, gunmetal weapons and orange canopies. Additionally, the mold seems to have been repaired to a degree, with some of the parts fit issues on earlier versions corrected.

The LB Redhorn was the sixth Zoid in the Legends Series. Styled after the various Redhorns that have gone before it, the LB is equal in size to other Neo-Blox Zoids.

The model comes on five frames along with three Neo-Blox modules, a clear canopy, a frame of connectors also included with several other Neo-Blox, and a chromed silver pilot. The colors are based on those of the original Redhorn.

A High-end Master Model Red Horn was released in February 2010.

The Dark Horn and Crimson Horn are both versions of the same type of Zoid as the Red Horn, and bear many similarities.