The Rev Raptor[6] (レブラプター EZ-027) (also stylized as Rev Rapter[7]) is a Velociraptor-type of Zoid affiliated with the Guylos Empire, and is one of over 200 species of bio-mechanical lifeforms that form the Zoid race depicted in TOMY's Zoids franchise.

The Rev Raptor possesses a considerable array of melee weapons for a Zoid of its size, but lacks any ranged weapons by default. As a result, it is often at a disadvantage against theoretically weaker Zoids, such as the Godos or Guysak. However, should it get in close it can defeat theoretically stronger Zoids. They work best in masses and in the Battle Story, a pack of Raptors were able to collectively take down a much larger Gojulas.

Many variants of the Rev Raptor exist, which do feature the addition of ranged weapons.

The Rev Raptor was created by the Guylos Empire.

One of the first Zoids developed using the Organoid System, the Rev Raptor is far more agile, responsive, and intelligent than older Zoid designs. The Zoid's small size and agility made it ideal for use as a reconnaissance unit, while its relatively simple design made it very easy to mass produce, despite the advanced Organoid System.

In ZAC 2099, the Guylos Empire found a previously-unknown series of ruins on Mount Olympus, located on the Western continent of Europa. Along with the discovery of a Deathsaurer, the Imperial scientists were able to use the ancient technology to create two completely new Zoids, the Genosaurer and the Rev Raptor.

The Rev Raptor was quickly pressed into mass production, supplementing other, older Zoids like the Iguan and Molga. Despite its abilities, it was outmatched by the newer Helic Gun Sniper. The Rev Raptor would remain as one of the standard infantry Zoids of the Guylos Empire for the duration of the war with the Republic.

The Rev Raptor appeared in Zoids: Chaotic Century and Zoids: Guardian Force as standard Imperial infantry Zoids, occupying a place in the Imperial Army between the Molgas and the Red Horns. Like most Imperial Zoids, Rev Raptors were easily mowed down en masse by the heroes. Though usually piloted by anonymous soldiers, on one occasion, Van Flyheight piloted a Rev Raptor.

In the anime, the Rev Raptors were given ranged weapons in the form of a pair of small beam cannons. The cannons were initially mounted on the back in the Zoid's first appearances in Chaotic Century, but were moved to the arms after a few episodes.

The Rev Raptor also appears in Zoids: New Century where they were a common opponent Zoid. They were also used by the Backdraft Group in several episodes; Major Polta piloted one on several occasions. Much like other appearances of the Rev Raptor, they were usually defeated quickly, and only posed a threat when used in numbers, or with some other technological edge. Two prominent examples of this is when Naomi Fluegel fought the Backdraft Group. The Backdraft used magnetic fields and managed to deflect her bullets, pinning her Gun Sniper.

She was saved, however, by the sudden appearance of Leon Toros and his red Blade Liger. The only other time a Rev Raptor came close to defeating a main character was when the Liger Zero Schneider malfunctioned and shut down mid-battle - however, the other members of the Blitz Team were easily able to defeat the Zoid. A Rev Raptor briefly appeared as one of the victims of the 'the chainsaw man' in episode 14.

The Rev Raptors in New Century had their beam cannons mounted on their arms like in Chaotic Century.

Rev Raptors appeared in Zoids: Fuzors, where they were depicted as living wild in the forest. The Rev Raptors depicted in Fuzors had the guns mounted on their backs, rather than the arms. Other Rev Raptors could be seen in the final battle against Alpha Richter, although they only served as background Zoids. 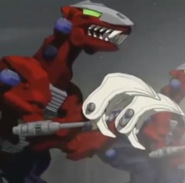 The Rev Raptor made appearances in both the Zoids VS and Zoids Saga series. In Zoids Saga, it appeared as a common wandering monster, and plays a minor role in Zoids VS. Several variants are available, including Rev Raptor PB (Pile Bunker), Rev Raptor WPB (Double Pile Bunker),Rev Hunter, and Raven Raptor.

Rev Hunter's first appearance was in Zoids Cyberdrive where it was a common enemy in early stages of the game. Where the Snipe Master excelled in long range attacks, the Rev Hunter was equally dangerous in melee assaults. Both Velociraptor Zoids fought in small groups and proved defensively lacking.

The Rev Raptor was featured in Volume 2 of the Trading Collection Cards release of Zoids Trading Cards.

A strange variation of it named (レブハーケソ) also appeared in the Zoids Battle Card Game, released with the Imperial Boosters from Set 4. This raptor appears to have customized (skeletal) armor and weapons.

The Rev Rapter was released in the Zoids (1999) line. It comes on four frames along with a small wind-up motor, a clear green canopy, four rubber caps a small blue pilot and label sheets. The Zoid is molded in black, maroon, and silver, with blue caps. The Rev Rapter was the second completely new design to be released as part this line.

The Zoid uses a simple wind-up motor for its motion; once wound, the Rev Rapter will walk forwards and wave its arms with the scythes on its back moving in and out. The Rev Rapter has suffered from consistently poor production quality, with many models being unable to walk.

Two upgrade kits associated with the Rev Rapter have been released.

A version of the model was released as part of the Zoids: Build Customize Mobilize line. This version changed the Zoid's name to Rev Raptor, correcting the spelling. It was released in the USA, Pacific and Europe, with the USA version being Hasbro-branded, while the international version was TOMY-branded. The European version was released in 2003.

Released as a convention exclusive in 2000, the Rev Rapter Night Patrol's maroon parts were remolded in a light purple color. The model also included a gold chrome CP-08 upgrade, along with new box art.

A limited edition Rev Rapter kit was released in 2003 as part of the Yuji Kaida series. Named the Raven Raptor[8], the model was black and silver, and included a grey CP-08 upgrade. Custom stickers and new box art were created for this release.

The Raven Raptor was the first Guylos Zoid to be released after the faction's defeat by the Neo-Zenebas Empire in the Battle Story, and was featured opposing the Sturm Tyrann in the Zoids Web Comic.

A Highend Master Model version of the Rev Raptor is scheduled to be released September 2021, it's retail price is 4,800 yen. Kotobukiya will be releasing an HMM Raven Raptor in November 2021 for 6,300 yen.