The Rising Liger (ライジングライガー, Raijingu Raigā) is a lion-type Zoid, one of over 200 species of biomechanical lifeforms depicted by TOMY's Zoids model, toy, and media franchise. It was developed from the Beast Liger and serves as the final form of the Wild Liger.

The Rising Liger is a medium Zoid with an open-air cockpit. Compared to other Zoids in the Zoids: Wild series, it is an M-sized Zoid.

The Rising Liger appears in Zoids: Wild ZERO. It is the Zoid of Leo Conrad.

The Rising Liger evolves from the Beast Liger after being exposed to a Regeneration Cube in episode 14.

Unlike the Beast Liger, the Rising Liger comes equipped with long-range weapons by default. The revolver on its back additionally allows its melee weapons to pierce tough armour. Finally, the Zoid itself is very sturdy, and is able to withstand moderate shelling.

These traits, combined with the already good manoeuvrability make the Zoid an extremely effective weapon. In episode 16 the Republic test the capabilities of the Zoid, and find it to be on-par with the best Zoids of the Empire, and even able to fight several Zoids at once.

Leo's ability to utilise his Zoids Factor also proves decisive. His metal body is durable, and he is able to unleash an Evo Blast without needing a special pilot suit.

The Rising Liger's power in close combat proved instrumental in stopping the Genospino. 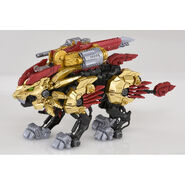 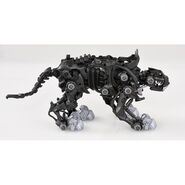 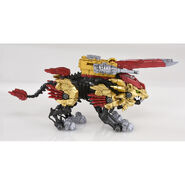 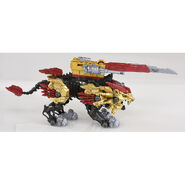 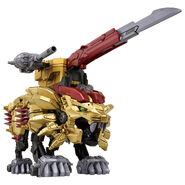