Rosso[1] is a fictional character from Zoids: Chaotic Century and Zoids: Guardian Force. He is better known as the "Red Masked Baron of Wings", a member of a Republican air force group that pilots Storm Sworders called "Ala Barone." He is one of the supporting characters in both series.

A former soldier of the Empire, Rosso is the leader of a group of desert bandits that go by the name of "Desert Arcobaleno Gang". He first appears in episode 2, in which he and his gang attack the Wind Colony in search of Zeke. Before the series began, Rosso and his group were outlawed from the military. During the events of Chaotic Century, Rosso attempted to gain favour with the empire, in hopes of regaining his former status.

Rosso and his gang made two major attempts at regaining status with the Empire. The first, was to steal Van's Organoid Zeke. The second was to act as an instigator to the battle of Red River. Unfortunately for Rosso, both these plans met with failure.

Although Marcus had requested Rosso's gang to initiate the battle of Red River, he had not intended to loose that fight. When Marcus lost, he placed the blame on Rosso. This ultimately caused Rosso to be captured by the Imperial Army. Rosso surrendered, and disbanded his gang, which also allowed prevented him from chasing after Van and Zeke.

After escaping from prison, Rosso came up with a plan to capture Prince Rudolph. However, since Prozen had sent assassins after Rudolph, Rosso unintentionally ended up saving his life. Rosso protected Rudolph until he was defeated by Raven's Geno Saurer.

Later in the series, they were saved by Captain Herman, who told them to fight for justice and become the "Baron of Wings", keeping their identities secret while helping Van penetrating Imperial forces making their way to Guygalos.

After Prozen was defeated and Rudolph crowned Emperor, Rosso continued fighting for justice; he and Viola became Rudolph's personal bodyguards.

When Hiltz and his Death Stinger went on a rampage, Rosso and Viola managed to rescue the villagers in Mount Iselina. Viola rescued the villagers, while Rosso dealt with Hiltz. Although he was easily defeated, he managed to survive.

At first, Rosso appears to be cold-blooded, impatient, but he does have a sense of bravery since he turned himself in to Imperial troops after disbanding the Desert Arcobaleno Gang. After developing a bond with Rudolph, his life changes from that of a mercenary to a valiant hero destined by the heavens. Since then, he continues to taunt his enemies that the potential of a Zoid pilot needs to be improved, but is otherwise far more honorable than before. While he is very gruff, he has never been cruel, having always maintained a professional level of calm as could be expected of an experienced leader and fighter. Even after the initial abduction of Rudolph, Rosso never treated the young emperor harshly, teaching him many basic survival skills and ensuring that he was well-cared for even when the boy attempted to run away.

Ability as a Zoid pilot[] 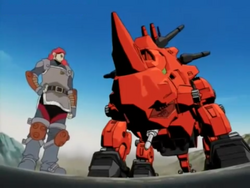 Rosso first used a Red Horn until he was captured by the Imperial army. Once he escaped prison, he used an Iron Kong, which was eventually destroyed by Raven's Geno Saurer. Despite having his Zoid defeated, he managed to survive, and ended up working with the Republic's Storm Sworders division.

Rosso is shown to be an exceptionally capable Zoid pilot, being able to handle Zoids usually reserved for top ranking military officers. An example of this was in Zoids: Guardian Force Episode 11 where Rosso managed to defeat the far superior Storm Sworder Stealth type (called SSS) with his regular Storm Sworder.

Rosso is a giant of a man, even passing up men like Rob Herman and O'Connell, who are both very tall. He even rivals an Organoid standing up straight in terms of height. He is of an extremely powerful build, easily being one of the most heavily muscled characters with a highly toned chest. Aside from his massive frame, Rosso's most identifying physical characteristic is his bright red, back length hair, which makes him easy to spot from a distance, coupled with his immense size. While leading his former gang, like all members, he had a horizontal purple stripe running across his face. He also happens to have calculating grey eyes.

Rosso also, like many characters, has a distinct voice. His being a deep, yet moderately raspy voice that makes him sound somewhere in his early to mid-thirties, but this is merely speculation in terms of his actual age.

Van: He and his gang tried to seek him out along with his Organoid, Zeke from the start. But when the gang disbanded, and became heroes, Rosso along with Viola assisted Van of returning Rudolph back to Guygalos.

Viola: Viola follows him anywhere, but when Rosso had disbanded the Desert Arcobaleno Gang, she went out on her own, and she said that she can't live without Rosso. He also seems to reciprocate her feelings. Their bond was deepened due to their taking of a parental role over Rudolph, with Viola even being impressed with Rosso's natural paternal instincts, hinting at a desire to have children with him.

Rudolph: Since Rosso abducted Rudolph, he only managed to save him from Prozen's clutches. But when Rosso changed his life of becoming a man of justice, Rosso became Rudolph's personal bodyguard after his coronation as Emperor. Rosso has a somewhat paternal relationship with Rudolph, with the Emperor even calling Rosso and Viola his parents after they tried to protect him from Raven. As Rudolph's surrogate father, Rosso has a close bond with him, serving as bodyguard, friend, and consultant.

Under the pseudonym, Red Mask: "A mysterious Zoids rider who saves Van with Storm Sworder. Leader of the Desert Alcavaledo Gang. Resembles Rosso, but identity's unknown."

"Leader of the Desert Alcavaledo Gang. Later saves Van from a dangerous situation as Ala Barone. "