The Saberlion (セイバリオン) (RZ-062) is a Lion-type of Zoid, and is one of over 200 species of bio-mechanical lifeforms that form the Zoid race depicted in TOMY's Zoids franchise.

The Saberlion is a lightweight Lion-type Zoid used by the Helic Republic.

Designed for urban warfare and guerrilla operations, the Saberlion is designed to hit and run rather than stand and fight. While lightly armoured, the Zoid is also very fast and agile, and a potent close-combat unit. Its blades, fangs, and claws are designed to vibrate at high speeds, improving their cutting power.

To aid it in its intended roles, the Saberlion is equipped with an array of assorted sensors that better enable it to locate its opponents in crowded combat environments (such as cities). The Zoid does have one weakness, however, in that it completely lacks ranged weapons. While not a problem in its normal environments, it can be a severe drawback if the Zoid is caught in the open.

In early ZAC 2102, the Neo-Zenebas Empire invaded the Helic Republic, reaching its capital. During the fighting, President Louise Camford attempted to escape in a special Saberlion piloted by Tommy Paris. While the Saberlion, Tommy, and messages/plans for the Republic Army made it through (despite attacks from Gun Tigers and a Liger Zero X), Camford was lost during the battle. She was declared missing in action soon afterwards. Camford's son, Colonel Rob Herman, was forced to take control of the collapsing Republic.

The Saberlion appears in Zoids Legacy, and is the first Zoid made available to the player character. 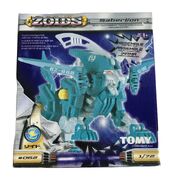 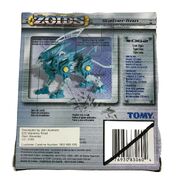 The Saberlion was first released in the Zoids (1999) line. It comes on six frames, along with a label sheet. Two of these frames are shared with the Guntiger, while one is common to all small non-motorised Zoids. The Saberlion is moulded in grey-green and aquamarine, with orange translucent components and yellow caps.

The Saberlion has no motor. The majority of the connections between components are ball joints, resulting in a significant range of motion and allowing the Zoid to placed in numerous poses.

The Saberlion's box and battle story pictures depicted it as being blue in colour, while the model itself was aqua.

The Saberlion was also released in Australia and the Pacific Region, as part of TOMY's Zoids: Build Customize range. No changes were made to the model; the only changes were to the box. The Zoid was not released in the USA.