The Saicurtis (サイカーチス EZ-018) is a Beetle-type of Zoid, one of over 200 species of biomechanical lifeforms depicted by TOMY's Zoids model, toy, and media franchise from the fictional Zoids universe.

The Saicurtis is one of the few Zoids that features an open cockpit. The pilot sits behind a glass shield at the base of the Beam Cannon. While sheltered in this position, the pilot is not closed in completely.

Though not shown itself, the Saicurtis is mentioned by Dr. D in episode 20. He explains that Rease's insects are an ancient type of Zoid (thought to be extinct), from which the Double Sworder and Saicurtis were based.

Saicurtis appeared as a wandering monster in the Zoids Saga series. It is shown as capable of full flight. It is also the base Zoid for the Double Sworder.

The Saicurtis was featured as part of the Original Battle Game and Trading Collection Cards releases of Zoids Trading Cards.

In the Chaotic Century manga, Saicurtis appeared as a part of the Imperial army within a special unit called the Tri-Blitz Squadron. The team utilized three Saicurtis that would circle the enemy, with one Zoid constantly exploiting the opponent's blind spot, shooting at them from behind. Van Flyheight and the Shield Liger, Caesar, were nearly defeated until Van realized he could aim a missile behind him, knocking out one of the Saicurtis and breaking the formation. 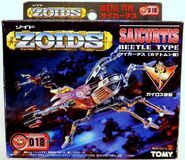 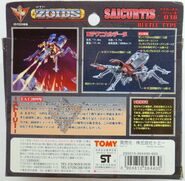 This Zoid was first released as part of the Zoids (1983) line. It was colored in red and gray, includes a silver pilot figure, and comes with standard Zenebas stickers. It includes a translucent red canopy.

The Zoid was released as a part of the Spider-Man and Zoids line, renamed Scarab. There are no known changes to the mould.

An unreleased version known as "Beeto" was seen in a TOMY toy catalog[5] in new colors, belonging to the Robo Strux line.

The Zoid was released as a part of the Zoids (1999) line. It was colored a different shade of red and gray and had a green canopy. There were no other changes to the mould.

Saicurtis was released by Hasbro as part of the Zoids: Build Customize Mobilize line. It was an identical model to the 1999 release. The manual says the Saicurtis is a Helic Republic Zoid[6], despite the Guylos sticker sheet.