The Sea Panther (シーパンツァー) is a hermit crab-type Zoid, a race of biomechanical lifeforms from the fictional Zoids universe.

The Sea Panther was used by the Zenebas Empire. Like its type suggests, it was designed for amphibious work, and is fairly well-armed and armored for a Zoid of its size. Common variations (as seen on the OJR box) included one equipped with armor-piercing drills, and one modified with a heavy cannon even more like the tank it seems to derive its name from.

The Zenebas Empire, having fled to the Dark Continent to regroup and get nastier Zoids, made to land on the Central Continent in ZAC 2041, engaging in a two-pronged surprise attack. The Sea Panther was involved in the ground half of this operation, presumably, as it was well-designed for such work.

The Zoid does not appear in any of the anime, though it's seen in earlier Zoid video games as wandering monsters. 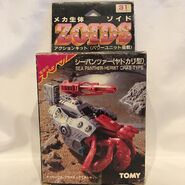 The Sea Panther was originally released as part of the Zoids (1983) line, it was introduced in 1987. It was silver-grey and bright red plastic. The caps are a greyish teal, the cockpit a translucent red, and the pilot chrome silver. It uses a wind up motor for motion. The Zoid shares the same early "clampshell" cockpit style as most early Zenebas Zoids.

Almost exactly identical to the 1983, the Zoid was reissued as a part of the Graphics release.

The box art on the back of the 1983 version lead to the creation of the One Blox series for the Sea Panther.