The Seismosaurus (EZ-069 セイスモサウルス) is a Seismosaurus-type of Zoid affiliated with the Neo-Zenebas Empire, and is one of over 200 species of bio-mechanical lifeforms that form the Zoid race depicted in TOMY's Zoids Franchise. The Seismosaurus appeared in the Zoids: Fuzors anime TV series.

The Zoid is built as a platform for its massive Focused Charged Particle Cannon (also known as the "Zenebas Cannon"), an incredibly powerful energy weapon. It features an incredibly long range. The Seismosaurus does not need to be immobilized in order to fire the weapon. A common tactic is for the Zoid to "sweep" the cannon across enemy lines.

The Seismosaurus' secondary weapons are also impressive. Most notable amongst them are thirty-one beam cannons spread along the neck, body, and tail. These weapons can channel particle energy from the Zoid's cannon, making them far more powerful than their small size would indicate. The Zoid is also wrapped in thick armor that is virtually impenetrable, rivaling that of the Death Saurer[citation needed].

The Zoid's only true weakness is its lack of speed and agility; however due to its massive arsenal and thick armor most enemies are unlikely to be able to exploit this.

Rather than using standard Customise Parts, the Seismosaurus is capable of combining with additional Blox Zoids to increase its capabilities. Two Fuzor Zoid combinations are known.

Created by the Neo-Zenebas Empire as a response to the Gojulas Giga, the Seismosaurus is one of the largest and most powerful Zoids ever created for military use. Like the Liger Zero and Berserk Fury, the Zoid is based on the body of a wild Zoid type.

By ZAC 2106, the Helic Republic had begun mass production of the Gojulas Giga, a Zoid that outperformed most of those in the Neo-Zenebas arsenal. In order to counter it, the Neo-Zenebas forces needed a Zoid capable of destroying it at long range. At the same time, their leadership wanted a "pure" Zenebas Zoid that lacked the "Guylos influence" of designs like the Geno Saurer or Berserk Fury.

The Seismosaurus was sent straight to the frontlines of the conflict, along with the Scissor Storm and Laser Storm 'Support Blox'. The Zoid proved to be devastatingly effective, able to effortlessly decimate enemy formations, and easily destroy the Gojulas Giga before the latter could engage it. The Seismosaurus was used to launch a new offensive that managed to all but destroy the Helic army, and drive their forces off the Central Continent. As a response to the threat posed by this Zoid, the Helic Republic created the Gairyuki counter it. Its Ray-Absorbing Vernier system can absorb Seismosaurus CPC and return fire using the newly-developed Ray-Absorbing Charged Particle Cannon.

In episode 25 and 26, Alpha piloted the Zoid into battle against the remaining Zi-Fighters, turning the Seismosaurus' firepower on them, along with a number of his former allies. As soon as he arrived at the location of the resistance, Alpha caused the Seismosaurus to fuse with modified, enlarged versions of the Scissor Storm and Laser Storm Blox, creating Ultimate Seismo. The combined forces of the Zi-Fighters were able to fight back, destroying the two giant Blox Zoids, until Marvis arrived with his Styluarmor, allowing Alpha to create the Berserk Seismo. The Berserk Seismo was able to defeat every opponent excluding Blake and RD.

Blake's Hien unit rammed the Seismosaurus as part of an attempt to rescue Luke—and proved successful, though it did not refuse with the badly-damaged Gairyuki afterward. As he fought on alone, RD discovered that the Liger Zero Falcon was the legendary Alpha Zoid, and with this knowledge was able to easily destroy the Seismosaurus.

Like most major 'villain' Zoids, the Seismosaurus is depicted as orders of magnitude larger than its Battle Story compatriot. This discrepancy was highlighted when it fused with the Styluarmor, which was depicted as nearly as large as the Gojulas Giga, the size of which itself is also exaggerated (which is more obvious in the introduction before each opening of Zoids: Genesis which feature both Zoids along with others from Fuzors).

At other times, the Seismosaurus appears to be as tall as a large building; so large that the Zoids it was fighting could stand on it. Perhaps the time when the size discrepancy is most obvious is when the Zoid's fuzor partners, specifically the Laser and Scissor Storm, are deployed. They are seen walking alongside their "normal" size counterparts, which are clearly many times smaller than the two used to make the Ultimate Seismos.

Furthermore, the Styluarmor cockpit is not part of the Berserk Seismo Fuzor. However, Marvis, who was piloting the Styluarmor at the time of the fusion, was able to continue piloting his Zoid after it had fused with the Seismosaurus.

The Seismosaurus makes an appearance in the Nintendo GameCube Zoids VS series. It plays a role in Zoids VS II (Zoids Battle Legends), relatively late in Mission Mode (after defeating the Bloody Death Saurer), the player will be assigned a mission entitled 'Lightball Dragon'; the objective of which is the destruction of the Seismosaurus, piloted by Lezard in all mission modes. It is also featured in the Zoids VS Battle Mode, where it is piloted by Reika.

The Seismosaurus was featured as part of the Zoids Scramble release of Zoids Trading Cards. 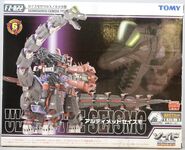 The Seismosaurus was released as part of the Zoids (1999) line. Introduced in 2003, production continued until 2004.

The kit comes on eight frames, along with a battery-operated motor, eighteen rubber caps, six plastic gears, three clear canopies, a two-part display stand, and three blue pilot figures. The Seismosaurus is molded in cream, with a maroon and lavender structure, and dark grey weapons. The Zoid's canopies and 'eyes' are translucent green.

Seismosaurus is the longest Zoid model ever produced; 30 inches (76 cm) when fully lengthened. The model uses a single "AA" sized battery for motion. Once activated, the Zoid walks forwards, sweeping its head and tail from side to side. In addition, the canopy and numerous weapons turrets on the body can be manually positioned.

No specific extra weapons were produced for the Seismosaurus. However, the Zoid sports numerous mounting points for Blox components. These are spread across the body, including one at the top of the neck, where the head is mounted. In addition, the Scissor Storm, Laser Storm, and Styluarmor Blox were designed to act as extra weapons for Seismosaurus.

This variant was released in 2004 as a contest giveaway. It was remolded in blue, white, and black, and came with a similarly colored Styluarmor. Limited to 300 units.

This Zoid was released by as a part of the Zoids: Build Customize Mobilize line. The Zoid is identical to the one that appeared in the anime, being black, gray, red, and having a green canopy. Three or four prototypes were distributed in some way before the Zoid's actual release. These prototypes had slightly different colors then the regular kit, the red being brighter. The box art also shows a Seismosaurus where some colors are reversed when compared with the actual kit. This also appeared on the Fuzors Seismosaurus box art, suggesting a printing error of some kind when the picture was taken for the box art.

The Seismosaurus was not released in Australia or the USA, but was released in the Philippines.

The USA version had an incorrect faction logo, and was Hasbro branded. The international version fixed the logo and was TOMY branded.

The Ultimate Seismosaurus was the last model in the Fuzors line. The Zoid included the Styluarmor, Scissor Storm, and Laser Storm Blox Zoids along with the Seismosaurus, all in a unified color scheme. The release was colored almost the same as the Hasbro version. (with the red parts being subtly metallic and a different shade of black compared to the Hasbro version). The instructions included with this kit show how to build each Zoid individually as well as the fuzor combinations.

A prototype was seen at the Zoids Exhibition in 2003. It was seen alongside the regular 1999 Seismosaurus. It was later sold on Yahoo Japan to a private collector.

A convention exclusive limited resin custom part created by Dengeki Hobby Magazine was made called the World Conquest Cannon in 2008. It features a massive back mounted cannon comparable in purpose to the Ultrasaurus' Gravity Cannon. The Zoid also seems to feature a laser targeting system for the cannon. It was also depicted in an artwork by Mercy Rabbit, the same artist who did Zoids Generations. The box for the cannon shows either a Seismosaurus prototype, or a custom done by DHM with the cannon attached. The color scheme is similar to that of the Fuzors Seismosaurus release. The Seismosaurus and what appears to be its pilot were probably used in a series similar to Zoids: Generations, or possibly at one point, was a part of the original comic and was just written out of the story.

The artwork shown here by Mercy Rabbit shows the ZGe cartoon's Organoid - like form of the Blitz Haken Zoid. This suggests that this was the Organoid of the apparent pilot of the Seismosaurus shown in the artwork. (In addition, it appears several Storm Sworder are shown in the artwork's background as well)