Before the start of the series, the Helic Republic discovered Shadow in a capsule. The convoy transporting the capsule was attacked by a Guylos regiment, led by Prozen. Rather than hand over the Organoid, Halford (who was part of the republican convoy) attempted to destroy the capsule. His attempt ultimately failed and Shadow was awakened. The Guylos forces attempted to give chase, but were stopped by the actions of Dan Flyheight. After this setback, it took Guylos forces a further five years to reclaim Shadow. Prozen allows Raven (who had been recruited by Prozen personally) to try and tame him. Raven was successful, and partnered with Shadow from then on.

Shadow's first appearance in the series is in episode 12, where Shadow and Raven are shown destroying Helic Guysaks. In the early parts of the series, Shadow is rarely used by Raven. Raven's piloting skill was sufficiently advanced that only exceptional circumstances led to Shadow being deployed in combat. A prominent example is when Shadow is employed to fight against Irvine, who had equipped experimental Gojulas weapons to his Command Wolf. Shadow is shown to constantly travel around with Raven, and is responsible for saving Raven after the Zaber Fang was destroyed.

With the loss of the Zaber Fang, Raven is given a new Zoid, the Geno Saurer. When the Geno Saurer is finally destroyed in episode 33, Shadow is once again responsible for saving Raven.

After the time skip, Shadow and Raven reappeared in episode 8, this time destroying military bases at random (although Raven does not initially travel with Shadow, the Organoid simply follows him. A result of mental scarring from his last battle with Van). After an encounter with Van Flyheight, Raven is able to regain his memory, and acquire a new Geno Saurer. While this Geno Saurer is able to defeat Van, Shadow pilots the Geno Saurer away, and fuses with it. After a period of evolution, the Geno Breaker is created. With this new Zoid, Raven is once again nigh unstoppable. However, due to the power of this Zoid, Shadow could only remain fused with the Geno Breaker for a set amount of time (three minutes). At one point, upon reaching this limit, Shadow collapses, and is only healed by Zoid Magnite, fed to it by Rease.

Later on, during a battle between Raven and Van, the Death Stinger fires its Charged Particle Cannon at the military base the two are fighting at, taking out one of the Geno Breakers claws, and killing Shadow. While Raven mourns his death, Prozen (now the Dark Kaiser) is able to resurrect the Organoid. However, Shadow is reverted to his old feral self, and attacks Raven (as well as Specula). However, once again, Raven is able to gain the Organoid's trust. In the final battle, Shadow helps with the destruction of the Death Saurer.

After the battle, Shadow leaves with Rease, Raven and Specula.

Shadow appears in the Chaotic Century Manga, and although it fills the same role as Raven's partner, it's abilities differ somewhat from the anime. Any Zoid Shadow Fused with, would perish after the combination. There were some exceptions, such as a Geno Saurer with multiple Zoid Cores. Raven uses this trait to his advantage, since he hates Zoids, his goal was to kill all of them, including the ones he piloted.

Shadow is shown to be feral and dangerous; attacking anyone he sees as a threat. Shadow is also seen physically destroying Zoids personally (for instance, by flying through them and ripping out their cores). However, Shadow is fiercely loyal to Raven, and appears to accept Raven's often short comments quite calmly. Shadow is not shown to care about anyone other than Raven.

One interesting thing about Shadow is that instead of boosters (as other Organoids have), he relies on a pair of wings to fly (though he is rarely seen flapping them, and usually makes use of them to glide through the air instead).

Like other characters, Shadow has his own unique relationships;

Raven: At first, Raven only sees Shadow as a weapon of destruction, and doesn't care for the Organoid at all. However, Shadow is shown to be loyal to Raven, and will (and has) risked his life to protect Raven. Later on, Raven finally treats the Organoid as a friend.

Rease: While Shadow is shown at first to dislike Rease (as he does with everyone else), he appears to be friendly to her later on in the series.

Zeke: As Raven is a rival to Van, Shadow is a rival to Zeke. The two are shown to be complete opposites of one another (Zeke being friendly and cheerful, with Shadow being feral and dangerous), though they've never interacted.

Specula: Much like Rease, Shadow is shown to dislike, and distrust, Specula. The two do fight at one point, with Shadow coming out as the winner. However, the two do appear to become friendly to one another at the end of the series.

Ambient: The two are shown to have a dislike of one another, though they are rarely in contact.

"A black Organoid and partner of Raven. Once destroyed by Hiltz, but he is revived." 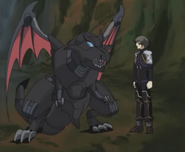 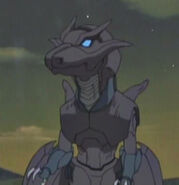 Shadow fused with a zoid core 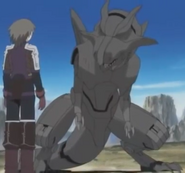