The Shadow Fox (RZ-046, シャドーフォックス) is a Fox-Type of Zoid, one of over 200 species of bio-mechanical lifeforms that form the Zoid race depicted in TOMY's Zoids franchise.

The Shadow Fox is a high-speed, medium-sized Zoid. It is very fast and agile, and one of the most capable Zoids of its size.

The Shadow Fox's greatest asset is its stealth systems.

The Zoid is equipped with numerous sensor baffles and radar-absorbing materials that make it almost undetectable by most sensors. On top of that, the Zoid is equipped with a sophisticated optical camouflage system that enables it to become nearly invisible. It also has numerous smoke dischargers that release a thick plume of black smoke to mask its already-black body, keeping its movements and whereabouts hidden and allowing the Zoid to sneak up on unsuspecting targets and strike them before they have a chance to defend themselves.

The Shadow Fox's primary ranged weapon is a 30mm Laser Vulcan gun mounted on a flexible turret on its back. This weapon has a very broad arc of fire, allowing the Shadow Fox to attack enemies at almost any angle. The Zoid's other main weapon is a rather unusual one; a net launcher mounted in the tail, designed to entangle enemy Zoids. The Shadow Fox is also capable of utilising the Strike Laser Claw attack.

The Zoid has one other unusual feature; the Laser Vulcan can be easily removed and replaced with a wide array of other weapons systems. In addition to various Custom Parts, the Shadow Fox can also mount weapons from other Zoids, like the Geno Saurer's long-range pulse cannons, the Lightning Saix's boosters and beam cannons, the Spino Sapper's chainsaws, the Konig Wolf's Dual Sniper Rifle, the Gojulas's buster cannon, and the CP-04, CP-06, or CP-13, making the Shadow Fox one of the most versatile of Zoids in combat.

The Shadow Fox was created specifically by the Helic Republic as support units of Liger Zeroes during the Republic invasion of the Dark Continent of Nyx.

The Shadow Fox was first deployed in ZAC 2101, during the Helic Republic's invasion of the Dark Continent. The Zoid was deployed alongside the Republic's Liger Zeroes, and this combination was highly successful, until they encountered the Eisen Dragoon's Berserk Fury and Grounchar units. The timely arrival of the Republic's Gunbluster Zoids saved them, allowing them to continue with their missions.

The Helic Republic later designed an improved version of the Shadow Fox. Known as the Fire Fox, the prototype was stolen by the Neo-Zenebas Empire and put into limited production.

The Shadow Fox made its anime debut in Zoids: New Century episode 20, as a prototype Zoid developed for the Backdraft Group by Dr. Laon. After the destruction of his Command Wolf AC, Brad Hunter joined the Backdraft as part of a ruse and was quickly sent into battle against his old team with the Shadow Fox as his new Zoid. Shocked by his apparent betrayal, the Blitz Team members are even more shocked when the Shadow Fox easily defeats the Raynos and Gun Sniper LS (in barely thirty seconds, according to Dr. Toros).

Even Bit Cloud had a tough time with his Liger Zero Jager conversion as the Shadow Fox's greater agility enabled it to use the terrain to its advantage. When they eventually face off in a head-to-head battle, with their respective Zoids being promised to the winner, the battle is declared invalid by the then-damaged (but still active) judge, who revealed that since Brad had secretly installed his original Zoid Gear in the Shadow Fox (which still listed him as being a registered member of the Blitz Team), the Shadow Fox had effectively become legally recognized as a Blitz Team Zoid, which was part of Brad's plan all along.

Brad would use the Shadow Fox for the rest of the series, helping to defeat the Lightning Team and Naomi Fluegel. In the final battle of the Royal Cup, Brad and his Shadow Fox helped to hold off Vega Obscura and his Berserk Fury so that Bit could re-arm the Liger Zero with its remaining CAS after exhausting his Panzer armor. Brad succeeded in his goal, though the legs on the Shadow Fox's right side were blasted off by the Berserk Fury in the process.

In addition to the capabilities of the Shadow in the Battle Story, Brad's Zoid can detect and track invisible enemies (such as the Helcat), making it a formidable foe in combat. In one episode, the Shadow Fox is customized (with Brad begrudgingly persuaded to do so with a promised increase in prize money) to use a large Buster Cannon, a gun designed for a Gojulas. While effective against the Fuma Team's Neo-Warsharks, the weight of the gun impaired the Shadow Fox's movement, and it was taken out by a flying Hammerhead. In this battle, it had to be deployed from the Hover Cargo's side panel rather than the catapult, in the same fashion as the Liger Zero when outfitted with its extremely heavy Panzer CAS.

In Zoids: Fuzors, Marvis used a Shadow Fox, both as a member of the Mach Storm Team and after he escaped from prison. His Shadow Fox was equipped with a custom energy shield, but despite this, it was destroyed by Helmut and Sigma's Command Striker in episode 10. He later had it replaced with a Styluarmor.

Several other Shadow Foxes appeared as background Zoids in Fuzors, including one with a reversed gold and black colour scheme in episode 24.

Many Shadow Foxes were featured in Zoids: Genesis, colored the same as the gold Shadow Fox in Fuzors. They are used in several minor roles, such as by a gang of thieves, and as part of Ra Kan's anti-Digald forces.

Like most other Zoids, the Shadow Fox was featured in both the Zoids Saga and Zoids VS series of games. In Zoids VS, an upgrade called the "Shadow Fox S" was made available for purchase. This version had better overall stats and was described as "Shadow Team's Zoid". The electromagnetic net gun is featured as a beam gun of sorts, firing with the same animation as the Dark Spiner's jamming blade.

The Shadow Fox was featured as part of the Zoids Scramble release of Zoids Trading Cards[citation needed].

The Shadow Fox features in only one panel of the New Century manga. There is no spoken dialogue about the Zoid, nor about how it was obtained. It does not participate in combat. 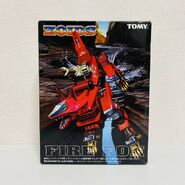 The Shadow Fox kit comes on six sprues[13], along with the wind-up motor, orange cockpit 'eyes', 24 rubber caps, two gears, a label sheet and a pilot figure. The Shadow Fox is moulded in silver-grey, black and metallic blue, with gold and metallic grey details painted on. For a number of Shadow Foxes, the black color had a slight green tint, likely a production error. The points where these parts were cut from the sprue made the green tint more evident, especially when placed next to a "normal" Shadow Fox.

The Zoid uses a wind-up motor for movement; once the Zoid is activated, it slowly walks forwards. The Zoid's head and neck can be manually positioned, the jaw opened and closed, and the Vulcan cannon can be elevated and rotated. A gearing mechanism on the side of the cannon can also be used to rotate the barrels.

The main feature of the Zoid is that the back-mounted weapons rack carries a variety of pegs in different widths, allowing a wide range of weapons from other Zoids to be mounted. The rack has three standard-sized pegs, as well as a large-sized peg and a square hole. The latter allows the mounting of the battery packs from several other Zoids, such as the Lightning Saix, Berserk Fury, and Death Stinger.

A chromed version was released by Leoshop of Taiwan[citation needed].

The Shadow Fox was released as part of the Zoids: Build Customize Mobilize line.

This version had a slight mould change, in that the end of the key to the Zoid's wind-up motor was rounded off[citation needed]. This mould change was carried forwards to all subsequent versions, as well as later runs of the Japanese version.

In the US the Shadow Fox was Hasbro-branded[14] and a Toys "R" Us exclusive[citation needed]. The international version was TOMY-branded[15] and released non-exclusively in countries around the pacific. In Australia, it was occasionally packaged with Zabats as part of discounting specials to boost sales.

The Shadow Fox featured as part of the Hasbro Action Figures line[16]. Instead of its signature 30mm Gatling gun, it featured a 4-barreled rocket launcher, so that it could actually fire the missiles. The legs were poseable and the gun could be pointed in any direction.

A limited edition version of the Shadow Fox was released as part of the Yuji Kaida Limited series in 2003, and given the new name of Fire Fox.

The main changes concerning this Zoid revolved around the fact that the Fire Fox was stolen from the Helic Republic by the Neo-Zenebas Empire. The Zoid was recoloured in red, gold, and silver, with green cockpit "eyes." It contained an altered label sheet (which designated it as EZ-046 instead of RZ-046 to reflect the faction change), and included a blue Imperial pilot. There were no mould changes, except for continuing with the remoulded key.

The Shadow Fox was released as part of the HMM line.

The HMM Shadow Fox was released in October 2012. It came with a Brad Hunter figure and the rose decal associated with the pilot.

A Fire Fox HMM kit was released in October 2013 as well as custom chrome parts for both variants.

The Mirage Fox was released for the 30th anniversary of Zoids, as part of the Zoids: Original. It was released June 2013. It is colored primarily white and black with gold details, it comes with an extra frame for the new wing blade upgrade.