The Shellkarn (シェルカーン) is a Chimera type of Zoid from the fictional Zoids universe. One of over 200 species of biomechanical life forms that provide the basis for TOMY’s model kit, anime, and comic-based Zoids franchise.

The Shellkarn's sole appearance in any manga was in Zoids: Galaxy Quest Planet Zi were it was the main antagonist along with Flyscissors, who fought off against Maya and her Liger Zero X and Kugo and his Konig Wolf. After Flyscissors and Shellkarn destroyed both Maya and Kugo's zoids, they later faced off again, but against Maya with a Unenlagia and Kugo with a Leoblaze. 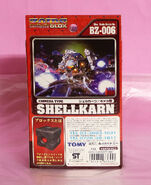 The Shelkarn was first released during the Blox line. The kit was moulded mostly in green and light gray.

The Shelkarn was released as a part of Hasbro's Z-Builders line in the United States. It is mostly identical to the Blox version.