The Sinker (シンカー EZ-032) (also known as Sea Striker) is Ray-type Zoid, one of over 200 species of bio-mechanical lifeforms depicted by TOMY's Zoids model, toy, and media franchise.

The Sinker is a fast, small Zoid, capable of naval and aerial operations. The Zoid is not heavily armed, and is usually used en masse when in combat. Like its name suggests, it is often involved in stealth operations, ambushing ships and sinking them. Since Sinkers can fly above the ground, they are not limited to just fighting on land, they can just as easily move over and under the sea similar to real-life flying fish. These ray-type Zoids are propelled forward by rocket boosters, and are often used as recreational vessels. Their boosters also resemble the remora fish that attach themselves underneath the wings of real-life manta rays.

Part of the wave of Zoids developed with human technology during the Human Arrival of ZAC 2029, the Sinker was designed to replace older amphibious Zoids and went into service during ZAC 2031 of the First Central Continent War. One of the first aquatic Zoids developed, it was one of the strongest Zoid operating in the oceans during its time. Of particular note is a Sinker assault of ZAC 2031 against Republican Barigator and Furolesios forces, sparking the start of naval Zoid warfare. The Sinker was later replaced by another new wave of Zoids developed for the Zenebas Empire's D-Day Invasion, including the Warshark, Brachios, and Sea Panther.

Later in the Western Continent War, the Guylos Empire resurrected the Zenebas design for service. Along with the Brachios and Hel Digunner units, the Sinker would serve as one of the predominant naval Zoids. They were often utilized to hide under the ocean's surface and would ambush Republican supply ships arriving from Delpoi to Europa. Sinkers were also part of the Prozen Knights landing on Europa during July ZAC 2100, with the intention of stopping a Republican counterattack. They were defeated by the new Republican Hammerhead Zoid however, and presumably retired after the superior Warshark was reentered into service circa January ZAC 2101.

Sinkers make several appearances throughout the series. Their most notable role was in the Guardian Force episode Phantom. Here heavily modified Sinkers were raced in the Grand Prix, with Moonbay and Rudolph as some of the pilots. Other episodes featuring Sinkers have them attacking the Ultrasaurus, they attack over the sea using their high speed to strike the slower moving Ultrasaurus.

Vega Obscura is seen piloting a Sinker when not inside the Berserk Fury, he is not seen using this Zoid in battle. Sinkers are also seen piloted by a few desert gangs in the earlier episodes, most notably in the first deployment of Leena's Gunsniper LS, where she takes out a large gang with her total assault. The Sinkers are custom and vary in their color and appearance. Some of these models are similar or are models that were used during the Grand Prix in the Guardian Force series.

Several Blue and white Sinkers can be seen working for the PKB in Zoids Fuzors. They do not have major roles, and are not piloted by main characters. 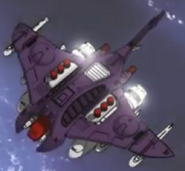 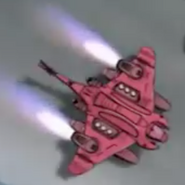 Part of the Sinker race lineup.

A sinker controlled by Hiltz' lacky.

The Sinker made a brief appearance in the Zoids VS series. It is fought in mission 4 of both Republic and Empire Mission Modes, along with other smaller appearances throughout the game. An upgraded version, called the Space Sea Striker is available in the shop, featuring all-around better stats. Sinkers also appear in the Zoids Saga series of games, and appear near or on water in random battles.

The Sinker was featured in every release of Zoids Trading Cards except for the Zoids Card Colosseum set. 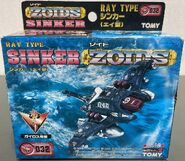 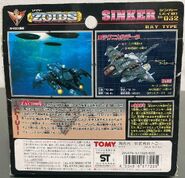 The Sinker was first released as a part of the Zoids (1983) line. It was colored in silver gray and red. It has pieces of foam in its tanks allowing it to float in water, similar to that of the Aquadon.

Seen in a TOMY catalog from 1985. The zoid was colored in brown and purple. It was from the same catalog that showed the prototypes Iron Kong and Malder in a matching color scheme.

It is shown with different tanks than the original version.

The Sinker was released as part of the Spider-Man and Zoids line. Issued under the name Z-Ray , there were no changes from the Japanese model apart from the packaging.

The Sinker was released as a part of the Robo Strux line under the name Stunra. The Zoid was colored dark and light blue. A second Stunra version was released identical to the "Z-Ray" color scheme and OER packaging, except with Robo Strux labels on the box. The blue Robo Strux version is the rarer of the two.

The Sinker was released in the Zoids (1999) line. The color scheme had dark purple and dark maroon. No other changes were made to the model, aside from packaging.

A prototype was sold on Yahoo Japan in 2005 colored in all white with a blue cockpit and canopy with gray caps.

The Sinker was issued under the name Sea Striker as a part of the Zoids: Build Customize Mobilize line. No changes were made aside from the packaging. It saw release in the Pacific and in the USA. The USA version was Hasbro-branded while the Pacific version was TOMY-branded.