The Snipe Master (スナイプマスター RZ-057) is Velociraptor-type Zoid, one of over 200 species of biomechanical lifeforms depicted by TOMY's Zoids model, toy, and media franchise.

To better perform its dedicated role, the Snipe Master has several other enhancements. The rifle is operated by a dedicated sniper crewman in a separate cockpit to the pilot[citation needed]. Additionally, the rifle is equipped with an advanced scope and tracking sensors to enhance its targeting. To aid the Zoid in its missions, it is equipped with sensor baffles that render it undetectable to most conventional sensors[citation needed].

These advances come at a price; save for its teeth and claws, the Zoid lacks any secondary weapons. If caught at close-range by an enemy Zoid, the Snipe Master is usually at a disadvantage. Several weapons packages can be added to help deal with this problem.

In the build-up of their forces for the invasion of the Dark Continent of Nyx, the Helic Republic created the Snipe Master to act as a dedicated sniping platform. This allowed them to free up Gun Snipers to act as regular infantry Zoids and supplant older machines like the Godos.

The Snipe Master is one of the Republican Zoids featured in the Zoids Web Comic. It is part of the Madthunder's division, and is one of the Zoids that battles with the Liger Zero X.

A TOMY commercial featured some Snipe Masters, in a similar role to the above Web Comic. They were equipped with various Custom Parts and engaged the Dark Spiner. 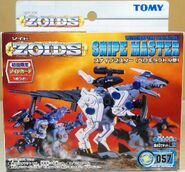 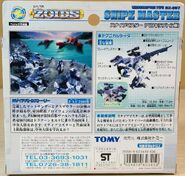 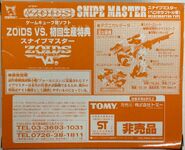 The Snipe Master was released in the Zoids (1999) line. It was introduced in 2001[citation needed].

The Snipe Master comes on four frames[citation needed], along with a small wind-up motor, a clear canopy, two lots of four rubber caps, two small grey pilots (one seated, one prone), and label sheets. The Zoid is moulded in white, light blue, and black, with an option for blue or red caps.

The Zoid uses a simple wind-up motor for its motion; once wound, the Zoid will walk forwards and wave its arms.

Several additional weapons kits were produced for the Snipe Master. All of these were also designed for use with other Zoids.

A limited edition version of the Snipe Master was released in 2002, colored in white, black and bright orange. This was released with the first Zoids VS game as a tie-in. The box was colored a monochrome orange and had a "Zoids VS" logo on it. There was also a picture of Zan on the box. The Zoid includes 2 sets of caps, one set blue and the other orange. It also includes a brand new custom sticker sheet.