This article is about the Genesis-Line Zoid. For the similarly-modelled, but otherwise separate Zoid, see Rayse Tiger.

The Soul Tiger (ソウルタイガー) is a type of Zoid, a race of mechanical lifeforms from the fictional Zoids universe.

The Soul Tiger is a type of Zoid found in the Zoid: Genesis timeline. It has the same base design as the Rayse Tiger but serves a vastly different role, due to the differing setting. The Soul Tiger is depicted as an extremely agile Zoid that primarily fights using the special claws mounted on its feet. While it does have various other weapons, these are relatively ineffective against Bio Zoids, and as such, are not regularly used.

In the Zoids Genesis battle story, the Soul Tiger is a Zoid coming from the Ancient Era that predates the Age of Technology. There is no indication if it is a unique Zoid or not.

The Soul Tiger is unique to the Zoids: Genesis anime. It is piloted by Seijuurou, an extremely skilled, but reclusive, Zoid pilot, who is famed for winning a famous Zoid tournament ten times before retiring. For this he is often termed "the best Zoid pilot in the world".

The Soul Tiger is a highly effective Zoid. The Metal-Zi claws and extreme speed of the Tiger allow it to annihilate almost any opponent it comes across. Despite this, it is often under-powered, lacking the sheer cutting power of the Murasame Liger or Sword Wolf, and is therefore simply unable to damage some of the more powerful Bio Zoids (such as the Bio Volcano or Bio Tyranno).

Midway into the series, the Soul Tiger receives an upgrade (known as the Soul Booster) in the form of boosters placed on top of the Zoid's backpack, making the already agile Zoid blindingly fast. Reaching 300 km/h with the new boosters it could also leap much higher than before. It also mounts several guns, which shoot bullets that curve through the air. Despite this, in the final battle, the Soul Tiger would have its Zoid Core impaled by Digald's Leader, Jiin, effectively "killing" the Zoid.

In the anime, the Soul Tiger gains heavier Metal Zi claws with its upgrade; the new claws were never reproduced.

In Zoids Saga DS, the Soul Tiger is shown to be a completely unique Zoid, and not related to the Rayse Tiger in any way.

The Soul Tiger, filling the same role as it did in the anime, is also featured in Super Robot Wars K. 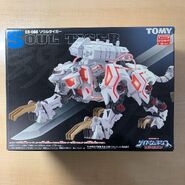 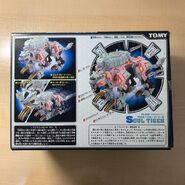 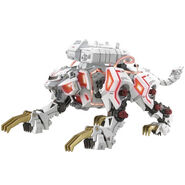