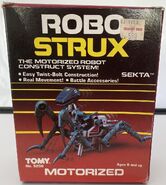 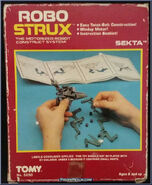 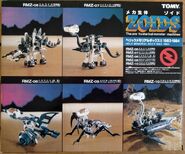 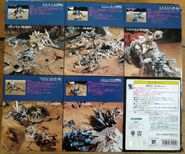 Spiker was first released as part of the Zoids_(1983) line. It is small mantis-type Zoid with a fairly simple build. He was released in the early 80s and was molded in black and grey with blue caps and the characteristic "White Head" cockpit.

Spiker uses a small wind-up motor for motion and comes with one gold-chromed pilot figure.

Spiker was released in the UK as part of the OER under the name Mantazoid. Aside from the box art the Zoid is identical to the OJR

under the name Sekta. It was completely recoloured to light blue and silver and came with a dark blue "Clamshell" cockpit instead of the standard White Head style with a chrome silver pilot figure replacing the gold one. He was released with a new box art, but may also be found in boxes (and colours) similar to the OER style.

Spiker was re-released in 2007 for the second Helic Memorial box along with Gorgodos, Hidocker, Pegasuros, and Furolesios. It's identical to the OJR.