The Stealth Viper (ステルスバイパー, RZ-020) is a Snake-Type of Zoid, and one of over 200 species of bio-mechanical lifeforms that form the Zoid race depicted in TOMY's Zoids Franchise.

The Stealth Viper is able to transverse a multitude of environments, and is amphibious. The Zoid is used primarily for reconnaissance work, spying, and sneak attacks, although it can be outfitted to operate as a support artillery Zoid.

The Stealth Viper is very well armed for its size, sporting a multitude of cannon and missile weapons. However, its frame is very fragile and it is not very well armoured. The Zoid is best suited to hit-and-run and guerrilla warfare rather than stand-up fights. The favored Stealth Viper tactic is to bury into sand, then strike at an unsuspecting foe and retreat before they can retaliate.

The Stealth Viper first appeared in the early ZAC 2030s, a product of the introduction of Human technology to Zi. The Zoid was used to support Helic forces during their war on the Zenebas Empire. The Zoid proved to be adept at guerrilla operations, harassing and slowing the Zenebas forces.

During the Guylos Empire's campaign to redevelop the ancient Death Saurer technology claimed from Mount Olympus, the Empire continued to push the war on multiple fronts, to keep the Helic Republic distracted from its true objective. To aid their forces, the Republic revived the Snakes, now known as the Stealth Viper. The all-round adaptability of the design allowed the Republican Army to hold the line in desert and forest regions, even pushing the Guylos forces back in some places.

The Stealth Viper first appeared in Guardian Force, where a Stealth Viper piloted by an agent of Hiltz's attacked several military bases, as well as Van's home village. When confronted, the Organoid Ambient fused with the Zoid, causing it to grow to several times its original size. It was defeated by Van's Blade Liger despite Ambient's aid.

Other Stealth Vipers appeared during the series, as a part of the forces under the command or influence of Hiltz. All these Zoids used the "mutant" Stealth Viper animation model, rather than one based on the toy.

In Zoids: New Century, a Stealth Viper was used by Benjamin, one of Harry Champ's robots. The machine was considerably customized, consisting of three Stealth Viper bodies strung together, as well as mounting both a CP-05 Heavy Beam Cannon, a CP-13 Wild Weasel Unit, and, oddly, what appears to be an antenna array on the cockpit/head of the Zoid is actually the micronized rear end of a Dibison with its two cannons.

The Blitz Team was also once going to battle a team called the Viper Team which, living to its name, used Stealth Vipers, but that battle was taken over the Backdraft Group, who wanted both teams to battle their Elephander. The Viper Team refused to take part in an unsanctioned battle, but the Elephander shot and knocked out their Zoids anyway. Another Stealth Viper briefly appeared during Brad's escape from Mt. Iselina and was piloted by a member of the Backdraft Group.

Znake were one of the final additions to the Red Mutant army controlled by Krark, the self-declared Prince of Darkness.

In the Chaotic Century manga, the Stealth Viper is the Zoid of choice for mercenary pilot Irvine. Irvine and his partner, Tornado first encounter Van and Fiona while they are trekking in the desert, and Irvine sets into motion the chain of events that bring Van and the Shield Liger, Caesar, together. Irvine's Stealth Viper is able to alter the coloration of its exterior to camouflage itself.

Irvine continues to work with Tornado until the Zoid is heavily damaged during the attempt to capture the rogue Hammerhead, Viking. Melissa Su, the child prodigy responsible for both unleashing Viking and enlisting the assistance of Van and Irvine in the recapturing effort, offers to rebuild the damaged Stealth Viper.

Tornado is reborn as a Stealth Dragon, and first appears during the fight against the rogue Death Stinger. The Stealth Dragon is able to generate an extremely powerful E-Shield that's said to be equal to the Blade Liger's, if not more, and is later upgraded with flight capability, which is implied to be of equal or greater speed than that of the Storm Sworder.

The Stealth Viper made a minor appearance in the Zoids Saga series, usually playing the role of a common wandering monster.

The Stealth Viper was featured as part of the Trading Collection Cards and Zoids Scramble sets of Zoids Trading Cards. 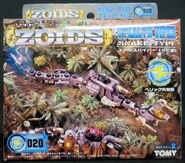 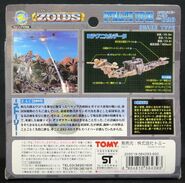 The Zoid was first known as Snakes (スネークス RMZ-25) and comes on three frames along with a small wind-up motor, a clear canopy, eighteen rubber caps, a small chrome gold pilot, and label sheets. The Snakes is molded in light green and grey, with a smoke canopy. The head was shared with the Pteras.

The Zoid uses a simple wind-up motor for its motion; once wound, the Zoid rolls forwards with its body slithering side to side.

The Zoid saw release as part of the Spider-Man and Zoids line, where it had the name Znake. The Zoid is molded in dark red and dark grey, with a translucent red cockpit canopy. The label sheet was also changed to include Red Mutant (Zenebas) logos.

A version of Stealth Viper was in the design stage before the Robo Strux line was halted. 2 different versions are shown: one is a Red Mutant with green armour and a beige undercarriage and the other is a Blue Guardian with silver armour and a grey undercarriage.

A version of the Zoid was planned for the Technozoids line under the name Venom Snake. This version was dull brown and bright orange. This Zoid was sighted on a Yahoo Japan auction, but it did not see wide release.

It was released as a part of the Zoids (1999) line. Named Stealth Viper, the Zoid was in brown and tan, with an orange cockpit canopy, black caps, and a grey pilot.

Three kits from the Zoids Customise Parts line are designed to work with the Stealth Viper; the CP-04 Attack Unit, the CP-05 Large-Bore Beam Cannon and the CP-06 Bomber Unit

The Zoids: Build Customize Mobilize release of this Zoid was named Venomous Viper[6]. There were no changes to the model kit from the 1999 version. The Venomous Viper was released in the USA and Pacific, with the USA version having Hasbro branding, and the international version having TOMY branding.

The Japanese 1983 Snakes was released as a part of the Zoids Graphics line and included a Zoids Graphics comic. There are no apparent changes to the mould.