The Styluarmor (スティルアーマー) is a type of Zoid, a race of mechanical lifeforms from the fictional Zoids universe. One of over 200 species of biomechanical life forms that provide the basis for TOMY’s model kit, anime, and comic based Zoids franchise.

A chimera-type Zoid, the Styluarmor is both a standalone Zoid and a Fuzor partner to the Seismosaurus, to create the Berserk Seismo. The Zoid also has an aquatic mode that resembles a sawfish, a doryaspis or a boreaspis.

The Styluarmor is piloted by Marvis in the final episode. Once the Ultimate Seismo is defeated, Marvis appears to inform Alpha that the city has fallen. Alpha refuses to give in, instead fusing the two Zoids together. The resulting Berserk Seismo is one of the more powerful Zoid to appear in Fuzors, with the Styluarmor's Sword Rail Cannon proving to be a powerful addition to the Seismosaurus' already potent arsenal. Once it is defeated by the Liger Zero Falcon, the Styluarmor is not seen again.

The Styluarmor appeared in the Saga III video game were it could combine with the Seismosaurus to form the Berserk Seismo. It also has a submarine mode. 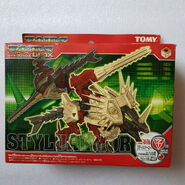 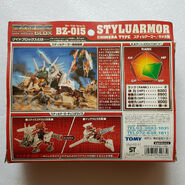 The model featured a black, gray and red color scheme. The zoid can transform into a fish form that most closely resembles a Doryaspis.

Included with the Ultimate Seismo pack, it includes three other Zoids namely, the Seismosaurus, Laser Storm, and Scissor Storm. No changes were made except for the color scheme which was now a black body with gray and red details.

This variant was released as a contest giveaway, to 300 units. A blue Seismosaurus was released along side of it as a part of the same contest.