This article is about the Genesis-Line Zoid, for the similarly-modeled but otherwise separate Zoid, see Whitz Wolf.

The Sword Wolf is a Wolf-type Zoid, one of over 200 mechanical lifeforms depicted by TOMY's Zoids model, toy and media franchise. It is unique to the Zoids: Genesis timeline.

The Sword Wolf is a Wolf-type Zoid named for the two large blades that are mounted onto its back. It uses these blades to skewer or slash at its victims. It has a great degree of maneuverability, and also sports several guns, making it a highly versatile Zoid that, while specialising in close-range combat, is capable at a range as well. In the Genesis anime, the Sword Wolf was an incredibly potent Zoid, as its Metal-Zi swords rendered it effective against the otherwise nigh-invulnerable armor of Digald's Bio Zoids.

In the Zoids Genesis battle story, the Sword Wolf is a Zoid coming from the Ancient Era that predates the Age of Technology. There is no indication if it is a unique Zoid or not.

The Sword Wolf is unique to the Zoids: Genesis anime, and is piloted by a man named Ra Kan, who is the leader of the Digald Suppression Army. Both of its swords are made from a rare material called Metal-Zi, which is the only substance capable of slicing through a Bio-Zoid's Hell Armour.

Initially, Ra-Kan was the King of Kida-han, and was respected as a powerful lord. However, his country was eventually attacked by Digald, with their newly-developed Bio Zoids. These Zoids proved incredibly difficult to destroy, and while his army may have been able to defeat Digald had he engaged them in a full-blown war, Ra-Kan knew that any such engagement would inflict great harm onto the people of his country. Thus, he fled the country with his Sword Wolf, with only his niece Rei Mii (piloting her father's Lanstag) travelling with him. This retreat proved to be a horrendous decision, as his downfall made Digald confident in their ability to intimidate the rest of Zi, and triggered their spate of invasions and attempted world-domination.

This all happened before the start of the series, which begins with Ruuji and his Murasame Liger in Mirodo Village. While Ruuji is able to combat Digald's Bio Zoids thanks to his Zoid's large blade, it is the appearance of Ra Kan and Rei Mii that drives them off in earnest. When Mirodo's Generator is destroyed, Ruuji follows Ra Kan, and the two see first-hand the horrors Digald have been inflicting on the rest of world. Eager to stop them, Ruuji tries to get Ra Kan to lead an anti-Digald army, prompting him to reveal his past to Ruuji. After apologising the people of Mirodo for failing to find a Generator mechanic, he accepts, and travels to a new country, Zuuri, which housed the citizens of his fallen nation, where he gathers an army and leads a counter-offensive against Digald.

The Sword Wolf would prove to be an invaluable asset to the protagonists, as Ra Kan is able to use it to not only combat effectively against Bio Raptors, but also commander units, like George's Bio Tricera. It is against this unit that the Sword Wolf is perhaps most noteworthy, as it, despite taking significant damage in the process, is able to defeat the Bio Tricera on several occasions. Even when it has its (effectively) impenetrable barrier deployed, Ra Kan was able to use the Sword Wolf to defeat it. This specific victory initially appeared to be a short-lived on, as while he gets inside the barrier and kills George, he is, in turn, engulfed by the blast from the Bio Tyranno's Bio Particle Cannon. Ironically, the barrier of the dying Bio Tricera protects him, and he is able to take his damaged Zoid to a mechanic and repair it. With everyone thinking him dead, Ra Kan is able to launch a surprise attack on the Bio Tyranno, and chops off its rib-mounted Death Scythes, allowing Ruuji to defeat it in the series' finale.

Midway through the series, it is upgraded by Ron to sport the Bio Crusher equipment, notable for sporting a much larger sword. This large sword is capable of sending out shockwaves that can cut Bio Zoids in two even at a range.

The Sword wolf was released as part of the Zoids Scramble line.

The Sword Wolf appeared in Super Robot Wars K, filling the same role that it did in the anime. Along with variants of the attacks seen in the anime, the Sword Wolf also has the ability to order a squad of Lanstags to preform an attack on its behalf (this is only relevant in terms of animation, and does not effect the battle mechanics, such as damage taken, in any way).

The Sword Wolf is compatible with the parts included with the Genesis Power Up PartsSet A. It is generally paired with the Bio Crusher, as the Sword Wolf was seen using it in the anime and the color schemes match.

A limited edition version of the Sword Wolf was planned, but never produced. This version would have been recolored, and included a four-inch Ra Kan figure and a Bio-Crusher upgrade. 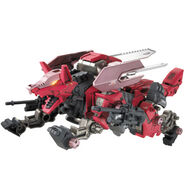 Sword Wolf was also produced in the Zoids Amusement Figure line, a short-lived line that coincided with the Zoids Genesis anime. The figure was made out of a fragile (clay?) material, and is smaller than the regular model.