Back to page
Add topic

I'm not sure if anyone's noticed this, but Altail's name in the English-translated version of Zoids Saga II is spelled 'Alteil' instead. I know the English-translated version is not very accurate, but Wikipedia (formerly, before its Zoids articles were 'edited') used the the e spelling rather than the a variant. Which is the proper one? - BladeLigerLeong 15:15, July 5, 2010 (UTC)

I just checked the game, and you're right, Leong. Erm, dealing with names (and Legacy) is tricky. This is an English wiki, so we agreed to use the official English names, as a basic rule. We had a big discussion about names and such in the forums awhile back, I believe. Slax was kind enough to compile a list of rules that basically summarized what we concluded in the talk. It's here. We have to remember that Legacy is an official English game--it's got "official translations," but that doesn't mean it's always right. Legacy is known for strange grammar and spelling. Many of the pilots keep their Japanese names (I think Brad is still Ballad, Jamie is still Jimmy, and Schubaltz is still Schwarz, for example), and some translations are just weird (ex: Thomas is Thoma). I say scout for more official translations, and compare them to Legacy's. If they're all "Ateil," then that's probably the spelling we should be using. (Do the NCZ DVDs have anything, for example?) -Imperial Dragon 16:27, July 5, 2010 (UTC)

ジミー is "Jimmy", Jamie is spelled variations of ジェミー/ジェイミー/etc as it sounds different. The latter is what Jamie's name uses...and how they pronounce it in the actual dub too. Wtf, DVD people? Pointytilly 02:56, July 10, 2010 (UTC)

So then are we gonna have the article's name changed to Alteil or will we leave it as it is and just place this info under the trivia? - BladeLigerLeong 14:35, July 6, 2010 (UTC)

If the official media's conflicting, then maybe the best thing to do is go with the most popular/well known spelling (ex: Pteras over Hasbro's Ptera Striker), then note the problem at the top of the article. I did this on Karl's page, because of the Lichen/Lichten/Liechien/whateverhismiddlenameissupposedtobe mess. -Imperial Dragon 15:46, July 6, 2010 (UTC)

@Slax: sorry to ruin your parade, but, how come this one is Altile, instead Altail, or Alteil? It doesn't make sense, while everyone is giving extra comments around here. VanXFiona 09:59, July 7, 2010 (UTC)

There is no reason to change it. This naming is the right one. If you look at what your asking, the points have already been addressed. "Altail" has no citations except from the wikipedia page. And as far as I can tell they got it from the japanese wikipedia, which also has no citations. Alteil is from legacy, which is was discussed at length to not be used, should any other official media exist. In this case the NC0 official DVDs have Altile. It makes perfect sense. That reasoning is perfectly sound, and should be used. Unless you have additional justification as to why Altail or Alteil should be used? Sylvanelite 12:22, July 7, 2010 (UTC)

Well, since Slax's already renamed the page, maybe we should just make a trivia in the article and put this information there to avoid causing confusion among visitors. - BladeLigerLeong 11:11, July 7, 2010 (UTC)

Why would you want to write it out twice. It's already in the article, in bold letters. I don't think there is reason to make extra trivia repeating the fact. Sylvanelite 12:25, July 7, 2010 (UTC)
Well, we could always do what I did on the Sabre Tiger page - create a "Name" section rather than a "Trivia" section and explain to people why the change was made. But if you feel it's useless since it's just a character and not a Zoid, we'll leave it as it is. - BladeLigerLeong 10:22, July 8, 2010 (UTC) 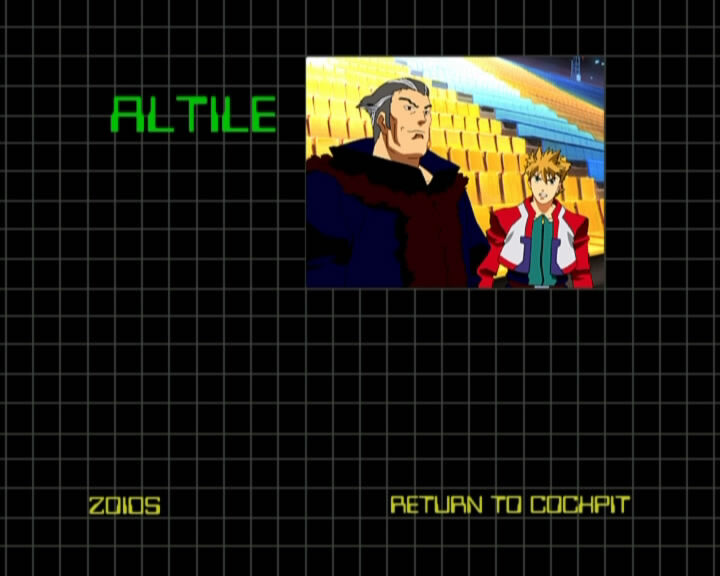 Don't mind me asking, just wanna know; where did you get that DVD from? Mostly DVDs that aren't in Japanese or even made by a Japanese company don't have accurate translations. They're more vague, whereas the Zoid games are more accurate because they contain information pertaining directly to the Zoids and characters themselves. Do you have proof that the DVD you possess is from a Japanese company or is at least translated correctly from Japanese? - BladeLigerLeong 14:30, July 9, 2010 (UTC)

This is the English wiki, therefor English names are over Japanese names unless one is more popular. (Zoids Fanatic 20:04, July 9, 2010 (UTC))

Not to pick on you Leong, but I'm going to rip your argument to shreds, in order to show why I haven't bothered writing more than a one line reply on this page. Your argument is in quotes and italics, mine is written in normal font: "Mostly..." So says you. I find this very difficult to believe. Can you prove that incorrect translations are in the majority? "...DVDs that aren't in Japanese or even made by a Japanese company don't have accurate translations" How did you determine that the translation was inaccurate? If this translation was inaccurate, then why would any other translation, which it would have to be compared with, be any more accurate? "They're more vague, whereas the Zoid games are more accurate because they contain information pertaining directly to the Zoids and characters themselves. " This is meaningless, it is a question about the quality of the translation, not the quantity of information being translated. As a matter of fact, this could easily work in the opposite direction, given more information to translate, the greater the chance of making an error becomes. "Do you have proof that the DVD you possess is from a Japanese company" This is a ridiculous statement. Japanese people speak Japanese NOT English. Why on earth would a Japanese company make english translations more reliable? That's just... Backwards. " or is at least translated correctly from Japanese?" I'd be greatly interested if you could define "correct", because if you could do that, you'd probably win you a nobel prize. Also, we have cited it as official. Burden of proof lies with you to show us why it should not be used.

Now, to show people the correct way to argue: I had to choose between "Altile" and "Alteil". The difference is menial, so I picked "Tile" because it is a real word, while "ei" is generally not used in english spellings ("ie" is much more common). This is a very weak argument. That said, the alternative conclusion (that "teil" makes more sense) has no arguments backing it up whatsoever. A Weak argument is still stronger than no argument. If someone is willing to list a reason as to why "teil" makes more sense, I'm all ears. Up until such a point in time, I see no reason as to why my edit was inappropriate. I hope no-one takes this the wrong way, this is not anything personal, nor an attack on anyone, this honestly is just an effort to show people that there is a good and a bad way to construct arguments. I hope anyone else voicing concerns about the "tile" spelling will use good arguments. I will not be this passive a second time (yes, this is a significantly toned down version of my reply). Slax01 22:50, July 9, 2010 (UTC)

I was never good with grammer either. Eh, I'll go with what is said.

This is just a talk page, and I'm only stating my views. But if no one's gonna listen to me and at least explain to me politely, and instead pick on me, I guess it's time for me to leave the Wiki. There's no sense in helping the edits if no one will consider one's opinions. - BladeLigerLeong 14:50, July 10, 2010 (UTC)

Oh come now, we care about your ideas. And Slax was not picking on you, he just wanted to state his opioun on the thing.

@ bladeligerleong. What do you explained? I'll try to be polite as possible here, since the question is clearly directed at me (I own that DVD I posted the pic from):

where did you get that DVD from? - A place called ezyDVD.

Mostly DVDs that aren't in Japanese or even made by a Japanese company don't have accurate translations. - I don't understand. Japanese companies never produce English versions of their shows.

They're more vague, whereas the Zoid games are more accurate because they contain information pertaining directly to the Zoids and characters themselves. - The games are based off the anime, meaning the anime is the primary source of info for the wiki. Games should only be considered when looking at something that is not in the animes.

Just to throw in another opinion, his Japanese name is アルタイル which only has one "correct" translation: Altair (a star in Aquila). So the mistranslation started with the NC0 dub itself. Also, I wouldn't trust DVD extras too much - even the DVD cases tend to have lots of errors (like calling Specular "Sakura" and Cerberus a three-headed Atak Kat o_O). Cheironyx 10:20, March 1, 2011 (UTC)

The simplest way for me to respond to this is perhaps to ask a series of questions: 1- What is your definition of correct? 2- If you can give one, will everyone agree with this definition? and finally: If yes to both of these, is that definition useful to a wiki? If you can answer all three questions, then there is no problem in using that definition of "correct" to determine whether the translation is "correct" or not. Otherwise, "official" stands in place of the subjective "correct". Slax01 10:40, March 1, 2011 (UTC)