I recommend a merge of these articles since they are the same and for the topics to be better organized.--Hollow ichigo 16:57, 1 March 2009 (UTC)

Agreed. The Führer name is also a mite...well, I don't have a problem with it in the context of Zoids because I know Japan's habit of going "COOL GERMAN WORDS YAAAAY", but it could easily sound bad outside of that context to passing visitors new to the fandom :p. (It's also a pain to type, because UIM partially broke my compose key. Sigh.) Pointytilly 12:23, October 23, 2009 (UTC)

We need a standard naming system. The article for stuff like Sinker and Salamander is using the Japanese names, but now this one is American, and so is the Warshark article... I just think we need a standard.--Azimuth727 19:51, October 23, 2009 (UTC)
I think Japanese names are the easiest to go by, unless they're particularly unfortunate. (My personal nominations for unfortunate would be BF and Merda) Wardick I just think is funny. Though that does raise the question of which name to use overall...and if we use US ones, that sticks us with things like Atak Kat D:. Pointytilly 20:59, October 23, 2009 (UTC)

To avoid unnecessary subjectivity, How about using the Japanses name by default and then overriding it with the "anime names" since they are easily the most well-known source (obviously excluding Genesis at this point in time). Not to mention that almost all supporting media is horribly inconsistent and/or poorly translated and/or discontinuous. If something has more than one anime name, just use the one that makes the most common sense. Slax01 21:19, October 23, 2009 (UTC)

My reasoning is to use the name that features most in the article. The first line in this article read The Berserk Fury (Berserk Führer in the Japanese release). Which seemed a bit odd if the page was "Berserk Führer". Plus, the name Fury is much more predominant over Führer in the article. For a more general convention, I'd say use the English names unless where consistency is a problem (Sabre Tiger/Zaber Fang for example). Sylvanelite 21:25, October 23, 2009 (UTC)

I like the Japanese by default, anime where better-known by that compromise, even if poor Hellrunner is stuck being called...um, well, merda then. Maybe we need a thing in the forum for a votediscussion on possible options? Pointytilly 21:27, October 23, 2009 (UTC)

Just a request, and a bit of a tip. Personally I think we need some better scans of the Berserk Führer Shadow Edge, and Liger Zero Ceasar the King than what we have now, which don't properly show the zoid in question's appearence in contrast to the standard issue.--

Neither of them are shown alongside a standard Zero or BF in-story, and the manga likes action shots more than show-off-exact-bits-of-Zoid shots like woah. If you have a suggestion for a better page to use from the manga I can try to get it, though D:. Pointytilly 07:33, November 7, 2009 (UTC)

It doesn't need to be a 'show off exact bits' image, just one that shows the zoid in question in a shot good enough so you see the whole thing with enough detail to tell what it's supposed to be. The NCZ manga image of the Liger Zero is an excelent example, it allows you to see just what the zoid looks like --Rui Usagi 15:51, November 9, 2009 (UTC)

sorry it waas best i could do w/ a pic like that/ there arent many out there 2 begin w/. plus the CC manga is all action or comedy shots as i have heard when it comes to zoids. best we have if u find something half decnt tell me and ill crop it 4 u if necisary. until then ull just have 2 deal.--Leon35 21:19, November 9, 2009 (UTC)

I found a great pic of BFSE, it's the two page spread where the zoid in question first appears, though the panel where it lands infront of Horai would work well too. or another two page spread where BFSE(on the right page) is attacking Ceaser the King.--Rui Usagi 07:40, December 26, 2009 (UTC) P.S. do you think we could get a pickture of the Beserk Tyrran; the red and gold BF.

The problem with two-page spreads is the Japanese comics are a lot thicker—I'd have to utterly ruin the binding to hold them flat, and I am so not doing that to an apparently out of print book. Pointytilly 17:25, December 26, 2009 (UTC)

Or you could scan the pages seperately and just fuse them in MS paint or Photoshop or whatever your imaging tool of choice is.--Rui Usagi 18:24, December 27, 2009 (UTC)

Hey does anyone have any screen caps of Berserk Fury without its armor (the way it was in Zero Century peisode 23) this page could really use it not to mention that it Is completely awsome. IngramMKII 04:10, July 11, 2010 (UTC)

Is it really that awesome to you? Most people prefer to see the Fury with its armour on. Not to mention that it's really hard to find an image of the strip-air Fury. - BladeLigerLeong 07:32, July 11, 2010 (UTC) 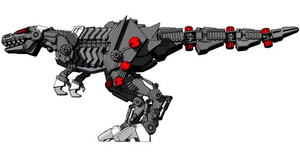 I suppose this could be inserted into the article--uploaded a picture and inserted it on the right. -Imperial Dragon 14:37, July 11, 2010 (UTC)

What is this? I'm still trying to get all the info together to clean up this guy's page- and I've found most of what I'm after, but haven't been able to find anything on the "berserk Tryann". Anyone got some light to shed, or shall I assume this is made up? Slax01 23:00, September 14, 2010 (UTC)

The Sturm Tyrann model came with extra parts to make a Berserk Fury with some red and gold elements. This is the Berserk Tyrann, although I've never heard of it referred to as that. So it's not made up... but I'm not 100% sure that it is named correctly or deserves a separate mentioning with Sturm Fury and Sturm Tyrann.--Azimuth727 00:25, September 15, 2010 (UTC)

With the HMM Berserk Fury coming soon, as with all the other HMM models, I wonder what the box art will look like? I always imaged Sarah, Vega, Altile, and maybe one other person looking and admiring the fully armored Zoid in all its glory. Not to mentioned what these characters look like all painted nicely on the box (like the Blade Liger Bang Version's). Ace2609 05:33, May 20, 2012 (UTC)

I removed this quote: "the NJR name was deemed to be offensive." because it lacks citation. If anyone has a citation, feel free to add it back. Sylvanelite 12:35, July 6, 2012 (UTC)

Retrieved from "https://zoids.fandom.com/wiki/Talk:Berserk_Fury?oldid=41979"
Community content is available under CC-BY-SA unless otherwise noted.