There is quite a lot of text on the Zoid's box. Could someone translate it to see if there's anything of value? Picture included below. 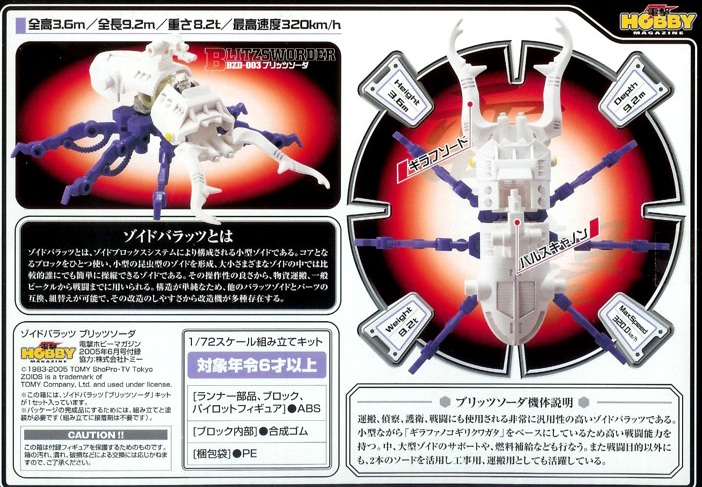 No I don't, I just ripped it off a website. Yeah I prolly shouldn't do that, so I guess I should mention that once (if) the info is extracted, then that pic should be deleted. And it certainly should not be used in an article. Slax01 03:42, August 12, 2010 (UTC)

Blitz Haken has same thing. Could be battlestory...

I do see your point, and yes, it should be merged. Basically, I'd say delete this page (turn it into a redirect) add the blitz sworder to the Girafsworder gallery and make a note saying that it was produced as an exclusive by the company (rather than "military color" just write "hobby exclusive" or something). The stuff on this box may or may not complicate matters (that is why I didn't merge it myself). But yeah, that page needs a cleanup anyway, even if no information exists about their models, there is info about them in the anime that hasn't been mentioned. Slax01 05:35, August 12, 2010 (UTC)

Is it not safe to assume that this Zoid (along with the other "Blitz"'s) were released at around the same time? And seeing as how the Blitz Haken was directly created to compliment the 2004 Brastle Tiger, shouldn't that place the group's creation (and thus the Blitz Sworder as well) at that year, as well? Riptidemtmte (talk) 23:00, January 29, 2015 (UTC)Riptidemtmte

Retrieved from "https://zoids.fandom.com/wiki/Talk:Blitz_Sworder?oldid=49473"
Community content is available under CC-BY-SA unless otherwise noted.