NES zoids game released only in japan. It has real time strategy and action elements. (it's also a tad difficult)

I would like to give more details but since I have no knowledge whatsoever of japanese I can hardly get through the menus.

here is a link to an online emulation of the game http://www.nintendo8.com/game/15/zoids_mokushiroku/

the game seems to be based on battles from the battle story. the first fight involves a deathsaurer and a madthunder the second has both a pegasus zoid and a gilvalder.

will continue to pla- errr research the game.

Got screenshots of the menus that're giving you trouble? I could try and help with that, at least. </too lazy to play through right now> Pointytilly 22:46, August 23, 2010 (UTC)

the last two boxes are the ones I can't figure out. 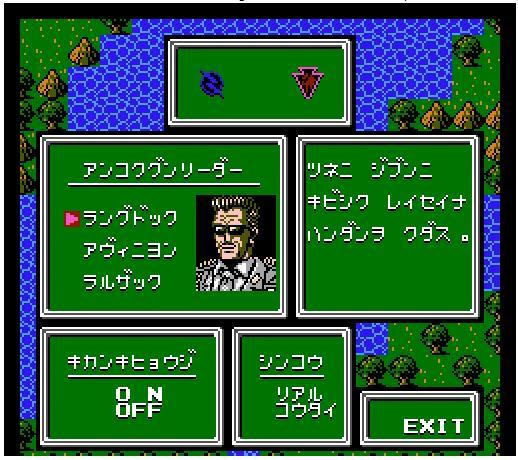 I could be wrong about this (since the names of the zoids are also in Japanese.) but I think this game actually has zoids not shown in many others. i.e. zeekdober, kingliger, and even some of the attack zoids!

Okay I figured out that the first box turns on and off a little flag that identifies the leader. the second one changes weather the game is turn based or rts. although there really isn't much strategy to it...ZGWolf 20:34, August 27, 2010 (UTC)

Holy cow! according to gamefaqs this game has been rereleased on the wii virtual counsel!!!111!!!one!1!

I have removed all of these games on account of at least two of them appearing to be fan-made. If they are unofficial but produced by a reputable company, then re-add them, but with citations to this effect. Slax01 22:49, August 23, 2010 (UTC)

Zoids Densetsu was an original gameboy game released only in japan. it was a side scrolling shooter where the player would control a shield liger, a gojulas, or a mad thunder as he advanced through an endless barrage of enemy zoids. every couple of levels a boss zoid would appear and fallow a semi random pattern.

I will update this as I get more info, feel free to add anything you can to the above section. once a paragraph or 2 is formed I'll add it to the article.

Right, I tried to go in and put in the games that were missing, but its a nightmare! every thing's listed more than once, and are in no particular order! Not to mention the names are impossible to search, thanks to translations being used inconsistently. Does anyone mind if I go through and sort it by release date? The formatting will be:

Doing some digging on this game, still have no idea about plot and what-not but I know this much.

During Zoids 2 the player is put in control of a nameable rupublic warrior and is sent on a quest to ________. The game plays similar to Dragon warrior and other early NES rpgs. The most unique feature of zoids 2 would be its battle system (which may or may not have been taken from zoids 1) when fighting an opponent the player is put in a first person perspective and must shoot at enemy zoids which move around randomly to avoid fire while continuosly shooting at the player. (shot's only do damage if the player sees them hit, the mode is similar to the sniper mode in Golgo 13 if anyone knows what I am talking about. ) In villages the player is represented by a human sprite, while in the overworld the zoid is shown. The player starts with a gunsniper (confirmation needed) and can aquire new zoids and weaponry throughout the game.

like I did with zoids legend (thanks for translation) this is serving as a kinda proto article,

yeah your right, gunsniper didn't have those back mounted lasers. but seems way to small to be a gojulas. modified spino sapper? it's not a godos either.

It's an Arosaurer with cool colors.

Here's some references/citations for the guidebooks:

Battle of the Central Continent: http://miraclenomori.com/product_info.php/products_id/72773

Retrieved from "https://zoids.fandom.com/wiki/Talk:List_of_Zoids_Video_Games?oldid=37221"
Community content is available under CC-BY-SA unless otherwise noted.