The Ultrasaurus (RZ-037 ウルトラザウルス Ultra Saurus) is an Ultrasaurus-type of Zoid, and one of over 200 species of bio-mechanical lifeforms depicted in TOMY's Zoids franchise.

The Ultrasaurus was created by the Helic Republic, and used during the various wars on Zi. Of the five largest Zoid models made, the Ultrasaurus mold saw the most releases.

Bigger than anything that had been previously released, the Ultrasaurus mountes a staggering array of weapons capable of leveling almost any target.

In most versions, the Zoid's main weapons are a quartet of 360mm Supercannons, similar to those used by the Gojulas. These long-ranged weapons are capable of raining down incredible destruction on targets from a great distance.

The Zoid is incredibly heavily-armored, constructed with some of the thickest armor ever mounted on any Zoid. This is a necessity, as the Ultrasaurus is ponderously slow and incredibly clumsy, unable to evade attacks. However, the Zoid's massive arsenal makes attacking it a dubious prospect at best.

The Ultrasaurus is equipped with a trio of smaller hover vehicles that can be used for reconnaissance and exploration independently of the main Zoid. Additionally, the Zoid is equipped with a sophisticated communications array, allowing it to act as a mobile command centre. The Zoid is amphibious, capable of operating both on land and in water, and can be completely submerged if required.

When the Zenebas Empire returned in ZAC 2042, they were prepared for the Zoid. The Empire had developed the massive Deathsaurer, a Zoid created specifically to destroy the Ultrasaurus. With its thick armor, the Deathsaurer was able to wade through the Ultrasaurus' fire, then destroy the Zoid with a single blast from its Charged Particle Cannon. Much of the Ultrasaurus force was wiped out; the rest fell back to the Eastern end of the continent.

Following the deployment of the Madthunder, the Ultrasaurus was largely relegated to support duties. However, with the invasion of the Dark Continent of Nyx, the Zoids were used to transport troops to the continent. Many were lost to the Heldigunners and Deadborders that protected the Guylos Empire's coasts. Most of the surviving Zoids were destroyed during the meteor disaster of ZAC 2056.

Only a single Ultrasaurus (belonging to President Helic) survived, and it was kept in reserve by the Helic Republic. After the revival of the Deathsaurer in ZAC 2099, the remaining Ultrasaurus was reactivated and pressed into action. Given immense long-range cannons to bombard the enemy, the Ultrasaurus (in the form of Ultrasaurus The Destroyer) was essential in forcing back the Guylos Forces on the Western Continent.

The Ultrasaurus was then converted into a transporter ("Ultrasaurus The Carrier") and used during the Republic's invasion of the Dark Continent. En route to the continent, the Zoid and its accompanying Hover Cargos were attacked by a force of Sinkers and fled into Triangle Daras. They managed to reach the Dark Continent safely with the help of mysterious new Zoids, only to be faced by the Eisen Dragoon.

The first appearance of the Ultrasaurus is in the later episodes of Zoids: Guardian Force. The Ultrasaurus was part of a combined military project between the Republic and the Guylos Empire, instigated at the same time as the Guardian Force itself, although the Zoid's existence was known to the Republic for roughly ten years prior. In the event of a devastating attack against one of the two nations by a mutual enemy, the Ultrasaurus would lead the Republican branch of the retaliatory offensive. When the Death Stinger, under the control of the Ancient Zoidian named Hiltz, destroyed the Republic's capital, New Helic City, this plan was put into action. All available and surviving Republican forces were withdrawn to the Republic base at Wyndine Lake. Upon arrival, the survivors were loaded into the Ultrasaurus, which then departed for a secret weapons research base in the Empire.

The Zoid was only armed with anti-air and anti-torpedo defense weapons upon its activation, requiring the visit to the Imperial base to receive its primary armament. Rather than receiving the standard quad Supercannons, the Zoid was armed with a single, massive Gravity Cannon. This weapon had a caliber of sixteen meters, and fired shells that create an intense localized gravitational field on impact.

The Ultrasaurus's Gravity Cannon succeeded in fatally damaging the Death Stinger, but was ineffective against the revived Death Saurer, which crippled the Ultrasaurus with its Charged Particle Cannon. As a last-ditch measure, the heavily damaged Zoid fired Van's Blade Liger out of the Gravity Cannon, which succeeded in destroying the Death Saurer.

An Ultrasaurus wreck was the finish line of the Royal Cup. This specific Zoid was apparently equipped with the same Gravity Cannon used against the Death Stinger and Death Saurer in the final episodes of Zoids: Guardian Force.

Other Ultrasauruses were used by the Zoid Battle Commission in Zoids: New Century as mobile command centers to monitor and control battles. These Ultrasauruses mounted four smaller cannons - the weapons configuration seen on the Ultrasaurus model, but scaled up in size (see Size Discrepancy below). The only time when an Ultrasaurus did any fighting was when one of Harry's Whale King is stolen and ended up facing an Ultrasaurus, which easily defeats the Whale King. The ZBC Ultrasaurus was also seen utilizing a shield to protect itself from a Charged Particle Cannon blast.

Ultrasaurus with Gravity Cannon in the anime. 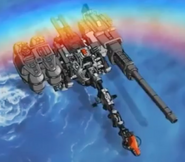 The Ultrasaurus, as seen in Zoids: New Century.

The Ultrasaurus portrayed in the anime series' is several orders of magnitude larger than that of the Battle Story. Though the Gravity Cannon is described as being some 50 meters in length, no actual measurement for the Zoid itself is given in the series, and the animation is rather inconsistent, but it seems the length of the Ultrasaurus is over twenty times longer then 50 meters, with different sections of the Zoid being depicted at different sizes. Several references to the general size of the Zoid are given:

This discrepancy has led to a misconception that the Ultrasaurus model kit is equally large, with the stated size of the model being at least equal to a large car.

The Ultrasaurus appears in the various Zoids video games, including the Zoids Saga games as well as in the Zoids Versus series. The most significant of these appearances is when an Ultrasaurus is used by Terra Geist as the final Empire-campaign boss in Zoids Battle Legends.

The Ultrasaurus appeared in one of the Republic Booster packs for the Original Battle Game set of Zoids Trading Cards.

The Ultrasaurus was released as part of the Zoids (1983) line, introduced in 1986 production continued until about 1989.

The Ultrasaurus kit comes on six frames, along with a battery-powered motor, separate battery-powered light unit, a clear frame, sixty-four rubber caps, eight small chromed gold pilots, and a label sheet. The Ultrasaurus is moulded in light blue, dull blue, and dull grey, with grey weapons and a smoke-coloured canopy.

The Ultrasaurus uses a pair of "C" sized batteries for motion. Once activated, the Zoid walks forwards, the head raising and lowering, and the jaws chomping. A pair of "AA" batteries provide power for the Zoid's eyes, which flash on and off when activated. The Zoid's weapons can be manually positioned, while a trio of small vehicles (one stored on the back, one in the chest and one in the head) can also be removed.

The Ultrasaurus is one of the largest Zoids kits ever released, comparable to the King Gojulas, Gilvader, and Madthunder. Only the Seismosaurus is longer than it.

Like several other Zoids of the time, the Ultrasaurus could use a number of different optional weapons that were included in the Republic Customise Set.

A version of the Ultrasaurus was planned as a part of the Spider-Man and Zoids line, as a part of the Red Mutant Faction. This version was recoloured in red, black and silver with a red canopy, and was seen in the 1987 TOMY product catalogue.

The Zoid's actual release is unclear; there are several unverified reports of sightings in toy stores during the 1980s, but no examples of a production models have ever been verified. Only an incomplete kit was spotted on auction in 2003, but was actually a repainted Zoids 2 Ultrasaurus. The only known version to definitely exist would be the promotional kit seen in the 1987 TOMY product catalog, but that model's whereabouts are not verified.

On the left is a custom kit that would depict what might have been the Red release, inspired by the 2003 painted model on auction. The 1987 prototype seen on the official Tomy catalogue had an all-red neck, and smoke-colored canopies.

A version of the Ultrasaurus was released in the U.S. and Canada as part of the Technozoids line under the name of Battlesaurus[14]. This version was recoloured in white, light grey, metal flake dark gold, and black with red caps.

The Ultrasaurus was also released in the UK and Europe as a part of the Zoids 2 line. This version was recoloured in black, light grey and chrome silver.

The Ultrasaurus was released as a part of the Zoids (1999) line. Introduced in 2000 as Ultrasaurus. This version was recoloured in light grey, dull grey and black with an orange canopy and grey pilots. In addition, the design was somewhat changed, with the eyes now running off the main motor. The second battery pack was retained, albeit gutted of its electronics.

Despite its use in the anime, no kit of the Gravity Cannon was made.

The Ultrasaurus remained in production until about 2004. Several chromed versions were also released in limited numbers in Malaysia.

The Ultrasaurus was released in the Zoids: Build Customize Mobilize line in 2003 as a Toys 'R Us Exclusive, and was one of the last items released. This version of the Ultrasaurus was based on the 1999 Japanese version, but incorporated several mould changes. The axles that drive the legs were lengthened, as were the pegs that connect the legs to the body, making the Zoid somewhat wider. This modification was done to make the model more stable, and less prone to tipping over.

Kotobukiya released a D-style non-scale "Ultrasaurus" model. The Zoid, as with all D-style model, features a 'deformed' look, with an exaggerated head and miniaturised tail. It comes with both the Gravity Cannon and Super Cannons, as seen in Guardian Force and New Century, respectively - making it the only product depicting the Ultrasaurus to have ever come with the Gravity Cannon. The kit includes a Moonbay pilot figure.