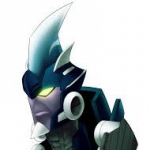 aka A Fishy Lurker

Hello, I'm your run-of-the-mill wiki editor who goes insane over the tiniest spelling and grammatical mistakes. That's pretty much all you need to know about me in this context. There's some shameless plugs at the very bottom of this page if you want to add me on social media for whatever reason.

If you're still reading this, you must be pretty bored. I guess I'll entertain you somewhat.

Facts About Me Edit

NOTE: All of my models are NAR/Hasbro except for the HMM Godos and the HMM Iguan.

And finally, I have one upgrade part: the CP-08 Pile Bunker (for the Iguan).

Favorite Zoid- Evoflyer. Ironic, given how I hate Fuzors as a series. Don't ask why I love it so much even when I don't own a model of it.

Favorite Pilot- O'Connell (He has a bitching green hairstyle to match his Irish name. I couldn't care less that he's a minor supporting character.)

Favorite Series- Chaotic Century/Guardian Force (Probably due to bias, as it was the first series I watched.)

Least-Favorite Zoid- The mere concept of the Tank triggers me. How can a Zoid live when it looks more like a head and wings bolted onto a rolling shipping container? Can it fly with said wings that look like thin slabs of paper? Why is it called a tank when its very appearance is an affront to true AFVs? Why is such an amalgamation considered to be a Zoid in the first place? I mean, I hate it more than the Glidoler; at least that Zoid has a clue of what its role is in life.

Least-Favorite Pilot- Leena Toros. What kind of a moron slaps a third-world country's worth of weaponry onto a sniping Zoid?

Least-Favorite Series- Fuzors. Holy hell, Fuzors. The shoddy CGI compared to the other series is just a part of why I despise this show so much.

I basically have three two social media outlets; Google Plus (NOT ANYMORE HAHAHA), Instagram, and Snapchat.

Yes, you can laugh now.

For the Greater Good.

Retrieved from "https://zoids.fandom.com/wiki/User:Riptidemtmte?oldid=60204"
Community content is available under CC-BY-SA unless otherwise noted.