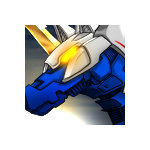 Hi, welcome to Zoids Wiki! Thanks for your edit to the User:Ace2609 page.

If you're new to Wika, you might want to check out the editing help section for some useful tips to get started.

I have a bit of a problem. In the Trivia section of the Zoids: New Century page, it said that there is an easter egg in main menu of the DVD. Well my problem is that when I went to the main menu of the DVD (on my computer), I could not find it. I even went through all six DVDs and nothing. I followed the directions in the Trivia section and nothing. What am I doing wrong. Ace2609 04:30, May 10, 2012 (UTC)

Here is a screenshot: 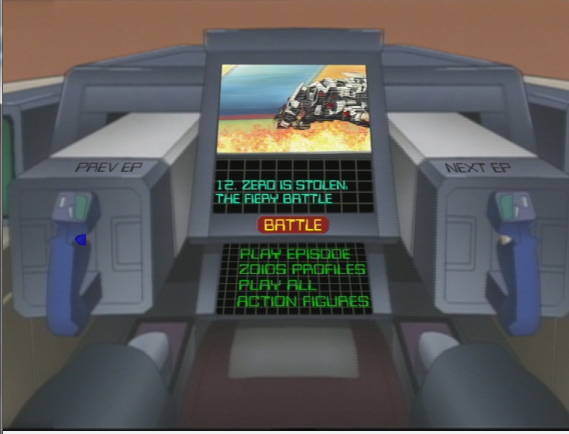 Notice the left-hand control stick's button is blue, as opposed to the right one which is grey. That's where you have to click. (it's only blue in the screenshot because I hovered over it. It's normally the same colour as the right hand control stick). Hope this helps. Sylvanelite 08:20, May 10, 2012 (UTC)

Thanks for the info, but unfortunely I am an American and I thought the Trivia section was talking about the American DVDs. Sorry. Cool screenshot of the cockpit though.Ace2609 21:15, May 10, 2012 (UTC)

Ahh, I didn't realise there was a difference. I've updated the trivia bit to clarify. Sylvanelite

When I first saw the written language of the Ancient Zoidians, it looked like Old English Text. Now I know I am getting a little bit too far but, I am wondering if those letters translate into something (e.g. one ancient zoidian letter is a character like Chinese characters or equals another letter of the alphabet). Ace2609 22:40, May 10, 2012 (UTC)

I know in the game Golden Sun, that it was possible to translate glyphs into english (or whichever version of the game it was). Don't know if it applies to Zoids. Going off memory, I don't think they were consistent enough to be english (english only has 20-40 different letters). Sylvanelite 08:08, May 11, 2012 (UTC)

Unless you got a lot of free time on your hands, I doubt you'll be able to translate it. Especially since there is the whole Japanese/English translations to go along with it.

I know that there are major nations ( Helic Republic, Guylos Empire, and Zenebas Empire) listed here, but what about the other nations like the Arcadia Kingdom (Zoids Saga) or Marroll and Jamil (Zoids Assault)? I looked around the different pages and couldn't find anything about them. Ace2609 23:45, May 17, 2012 (UTC)

It depends a lot on which timelines you look at. The Zoids Bible has a lot of different nations and tribes, but hasn't been uploaded in full to the wiki yet (because it's in japanese). The locations category http://zoids.wikia.com/wiki/Category:Locations has a few pages, but most have been in need of maintenance for a while. The Planet Zi page probably has the most information at present. There is also the factions category http://zoids.wikia.com/wiki/Category:Zoids_factions which has a few more. Sylvanelite 08:18, May 18, 2012 (UTC)

On the SyFy channel, there is a show called Collection Intervention. While watching an episode, one of the people collects Japanese robots and guess what I saw? Zoid Models! (It was for a split second and I think saw a Shield Liger and a Zaber Fang.) I continued to watch and during one of the "let's sit down and discuss what to do next" segments, I spoted the boxes for King Gojulas and Gustav behind the host (you kinda have to look around and look for the familiar "ZOIDS" logo).Ace2609 (talk) 05:35, September 13, 2012 (UTC)

Has anyone read the Concept Art Books?Edit

Now I know that the books are from Japan but they also have an English translation on the opposite page in the same book.  I am wondering if anyone would mined if I did a page for the CA books, just a quick overview of each book.Ace2609 (talk) 05:26, November 14, 2014 (UTC)

Retrieved from "https://zoids.fandom.com/wiki/User_talk:Ace2609?oldid=49396"
Community content is available under CC-BY-SA unless otherwise noted.