The Valkyrie Caesar (ヴァルキリーシーザー, Varukirī Sīzā) is a type of Zoid, a race of biomechanical lifeforms from the fictional Zoids universe.

The Valkyrie Caesar is a Beith Republic Zoid built, against Beith custom, around the recovered Zoid Core of the ancient Murasame Liger. The Bravejaguar and Hardbear were also incorporated into its design. While dangerous at long range with its Twin Impact Cannons and Beam Cannons, the Valkyrie Caesar's specialty is lethal close-combat with its deadly Valkyrie Blade. This weapon, based on the Murasame Sword of its predecessor, can cut through virtually any armor, leaving behind the telltale wound that has been nicknamed the "Valkyrie's Brand" or "Mark of the Goddess of War".

Major Rejirudo[1] piloted a Valkyrie Caesar as he led the counterstrike against the Dinas Empire's G2 Rexes in an attempt to recapture the Beith capital. 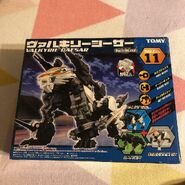 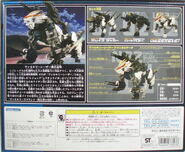 Valkyrie Caesar Box art (back)
Add a photo to this gallery

Valkyrie Caesar was released in September of 2006, one of the final Neoblox models to be released. It consists of the Bravejaguar, Hardbear and LB Murasame Liger in a new cohesive color scheme.