Vega Obscura[2] is a fictional character from Zoids: New Century. A member of the Backdraft Group, working under the command of his guardian, Sarah, he is a child prodigy. He does not appear in the New Century manga.

Vega is a young child described as the "King of Unsanctioned Battles". He is a genius Zoid pilot and the Backdraft's top warrior. He is first introduced in episode 22 of New Century, and serves as the final opponent of the Blitz Team. Not much about Vega's past is known, and although he has a Sarah as a guardian, it is unclear if she is related to him or is just his supervisor.

Vega's personality could be described as similar to Bit Cloud's; cheery, upbeat and optimistic. Seemingly an ordinary child, he likes to play video games, and is depicted as being somewhat reluctant, though obedient to his guardian Sarah. Also like Bit, Vega is seen having a caring bond with his Zoid, talking to it and treating it as his partner rather than simply a machine with weapons.

Unlike other theropod Zoid pilots such as Raven and Blake, Vega's personality stands out because he is not driven by vengeance or anger. Instead, Vega merely sets out to have a good time, treating Zoid battles simply as a game. However, he is still a very dangerous pilot; because of his detachment from the battles, he sometimes uses tactics

that could put his opponents and sometimes even himself in serious danger. For example, in episode 23 he prepares to fire his charged particle cannon upon the Liger Zero despite the fact that the Berserk Fury has no armor and would be destroyed by the recoil from the attack, and in the final episode, he opened fire on the helpless Hovercargo with his Charged Particle Cannon without any apparent regard for the safety of the occupants within. Such tactics are typical of Backdraft group pilots, who are known and encouraged to fight dirty and break the rules to elicit higher wagers from their clients.

For all his skill, childishness, and disregard for safety, Vega is a good sport. After his defeat during the Royal Cup, he congratulated Bit Cloud for his well-fought victory over the Berserk Fury.

Vega commonly wears a whitish-tan and blue outfit with black details and two maroon buttons on his chest. Sarah says this outfit improves his synchronization with the Berserk Fury. He also wears gloves and boots of the same tan colour as this outfit. He has greyish-black hair in the same style as Raven, a character from Chaotic Century and Guardian Force.

Ability as a Zoid Pilot[]

Vega is given the title the "King" of unsanctioned battles. His abilities more than reflect this, as he is by far the most powerful individual Zoid pilot shown in the series. In his first Zoid battle, he fought the Blitz and Lightning teams with an unarmed Berserk Fury. Vega is victorious in his battle, taking only a slight scratch of damage in the process. In this battle, he not only fights against the Ultimate X Liger Zero, but also the 3rd, 4th and 5th best sanctioned pilots (as per the time trials).

During the Royal Cup, he defeats 5 class A teams faster than any other entrant. It is only the stubbornness of the Berserk Fury that allows the Blitz team to catch up. (As the Berserk Fury wanted to challenge them to a battle)

Vega is the only person who can bring out the potential of the Ultimate X Berserk Fury. His reflexes and tactics allow him to predict opponents moves several seconds before they act. This, combined with the learning capacity of the Ultimate X, makes him nigh on invincible in combat.

At one point Altail mentions he "is not sure which to applaud" The Berserk Fury's capabilities, or the inherit skill Vega displays. The response indicates that the Berserk Fury responds to the demands Vega puts on it. Several other top-ranking pilots make similar comments.

Vega pilots the Berserk Fury in combat, but is also seen flying a Sinker, and using a Command Wolf in an arcade game simulator.

Due to Vega arriving late in the series, he does not interact with much of the cast outside of Zoid battles.

Sarah: As his guardian, Sarah looks over and cares deeply for Vega's safety. She is much of a mother figure to Vega, although the series is not clear on if Sarah is related to Vega in any way.

Altail: Altail rarely interacts with Vega directly, as all of the Backdraft's members converse via Sarah. Altail attempts to assassinate Vega during the Royal Cup, but this is not out of personal anguish against Vega. Altail was trying to usurp control from Sarah, and eliminating Vega was an end to his means.

Bit: Vega has a cheery rivalry with Bit, outside of combat they get along well. However they mainly fight as opponents in combat, since both are in possession of two Ultimate X Zoids.

Berserk Fury: Like Bit, Vega is seen talking to his Zoid, and understanding its personality.

"The boy who rides a Zoids called Ultimate X or Berserk Fury. Excellent Zoids warrior, who can predict future locations."

Vega Angry in his battle with Bit

Vega in the cockpit of the Berserk Fury 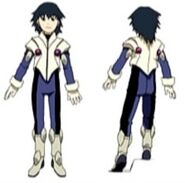 Vega suit for the Fury

Vega anticipating moves in his battle.