The Whale King (ホエールキング, ZCDX-01) is a Whale-type of Zoid, and one of over 200 bio-mechanical lifeforms that form the Zoid race depicted by TOMY's Zoids model, toy, and media franchise.

The Whale King appears in both the battle story and most of the Zoids anime series as a transport for Zoids and people.

When the battlefield becomes an immense area in a war between continents, it is essential for a transporter to carry a large quantity of Zoids at once. The Empire's technological teams based the Whale King on an enormous oceanic wild Zoid. The giant Zoid can carry an entire battalion of troops and can move through either air or sea with ease. Though its enormous size and slow mobility make it unsuitable for direct combat, it is still heavily armoured and can protect the Zoids it carries.

Several Whale Kings appear throughout the series; the majority of the Imperial army is transported via the use of Whale Kings. At various points, older Whale Kings are used by the antagonists of the series. The Whale King is used by both the Empire and Republic later in the series, being differentiated by the appearance of each faction's logos on the head. Many Whale Kings were used to transport Republican citizens from New Helic City toGuygalos before Hiltz's Death Stinger attacked the city, as well as deployed Karl Schubaltz's platoon in an attempt to counter it. One also acts as a personal transporter for Emperor Rudolf, while several were used to attack the revived Death Saurer, as well as launch several aerial Zoids to fight it, though most of them were obliterated by the Death Saurer's Charged particle cannon, bar Rudolf's

Harry Champ owned at least three Whale Kings, and many are owned and used by the Backdraft Organization. Harry's Zoids are of the standard red colouration, while the Backdraft has black and orange Whale Kings. When Harry loses all his Zoids to the Backdraft, he retains at least one Whale King, and is seen with three in total later in the series. The Tigers Team also used a yellow Whale King that matched the colour of their Zoids.

Dr. Laon possessed a unique custom Whale King, which was often seen battling Dr. Toros' Hover Cargo. The 'Great Whale King,' as he called it, was much larger and more powerful than a standard model. It held hundreds of small to medium-sized Zoids, many cannons, and even a 200-inch home theatre. Laon gloated that it had firepower equivalent to a Death Saurer. The most surprising feature of this transport was the installment of an anti-gravity generator. When deployed, a massive white light shone from the tip of the Whale King, creating an anti-gravity wave which covers the battlefield, sending all Zoids up into the high atmosphere.

The episode "Nightmare in the Sky" is the most prominent featuring of the Whale King in this series. In this episode, a luxury Whale King is hijacked along with its passengers, the hijackers demanding release of a prisoner in exchange for the lives of the people on board. 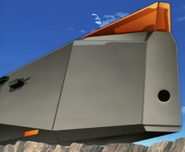 The Whale King plays minor roles in the Chaotic Century Manga, it servers as a transport when Melissa Su delivers the Liger Zero to Van, and later is seen being used by Rosso and Viola to fly to Donnie Chen's castle.

The Backdraft is seen using a Whale King in the New Century Manga, it's role is minor and is only seen fleetingly.

The Whale King appeared in the Zoids Saga series of games, where it is a late-game transport. The Whale King is able to fly, and hence can traverse all kinds of terrain and avoid random encounters. However it is impossible to use it inside caves, forcing the player to use one of the earlier transport Zoids for underground exploration. The Zoid also appears in Zoids VS III where the Whale King serves as a battleground.

A Whale King would be used in the Web Comic to transport the Dark Spiner to the battlefield.

The model is in 1/360 scale and comes with 6 mini zoids include Redler, Death Stinger, Dark Horn, Zabat, Rev Raptor and Geno Breaker plus 8 missiles and 2 pair of wings. It is a playset unlike the common 1/72 Zoids.

The retail box (back).