The Whitz Tiger (ワイツタイガー) is a type of Zoid, one of over 200 species of biomechanical lifeforms depicted by TOMY's Zoids model, toy, and media franchise from the fictional Zoids universe.

The Whitz Tiger is a Zoid created by the ZOITEC corporation by fusing together the Whitz Wolf and Savinga. Because ZOITEC previously lacked the technology needed to resurrect an ancient Tiger core in a single body, the Whitz Tiger's core lies in the Savinga, while the bulk of the body is made up by the Whitz Wolf.

The Rez Tiger is a variant specific to the Zoids: Generations limited edition model line, which inhabits a parallel (but separate) continuity to Genesis. In addition to the normal Whitz Tiger weapons, the Rez Tiger carries a large blade which can be mounted onto the Zoid's back or carried in its mouth.

The Rez Tiger is already combined with Savinga, but is capable of separating into its component Zoids. When separated, either the Whitz Wolf or the Savinga can carry the sword.

Of the three legendary Tiger Zoid cores discovered by ZOITEC and Zi-Arms, the Whitz Wolf was the first Zoid to enter service in ZAC 2230. Unable to completely reconstruct the legendary Whitz Tiger in a single body, ZOITEC used its experience in Blox Zoid manufacture to create the Savinga, which carried the remaining components, while being a formidable Zoid itself.

When combined, the Whitz Tiger proved to be a formidable adversary. To compete with it, rival corporation Zi-Arms created the Death Raser and Parablade, which combined to form the Decalto Dragon. As the war between the two companies escalated, the Whitz Tiger was frequently used to attack Zi-Arms installations. Eventually, the Zoid was instrumental in the defeat of the rampaging Mega Death Saurer, but was destroyed in the process.

The Whitz Tiger made an appearance in Zoids VS III.

Please see the Whitz Wolf and Savinga articles for more information about them separately.

The Whitz Tiger can be created by combining the NJR Whitz Wolf with the NJR Savinga.

The Zoid is compatible with the Transhawk. The Zoid can also be used as an upgrade for the Rayse Tiger.

A limited edition Zoid, the Whitz Tiger Imitate was remolded in bright orange, brown and bronze. The release included both recolored versions of a Whitz Wolf and Savinga.

Originally intended as a convention giveaway and then a limited edition, the Whitz Tiger Imitate was overproduced and undersold. Two years after its release, the Zoid can still be purchased cheaply throughout Asia. 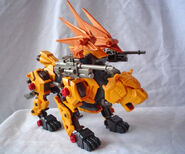 Released as a contest prize, Red Whitz Tiger is remolded in dark red, three shades of grey, and silver, with a translucent green canopy. This version also included similarly recolored versions of a Whitz Wolf and a Savinga.

Made available exclusively to readers of Dengeki Hobby and C3X, the Rez Tiger (レッズタイガー) is the second in the Generations limited edition line. The Zoid is molded in bright red and black, with the addition of a custom sword and a sheath. The Whitz Wolf and Savinga included are also recolored. 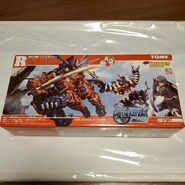 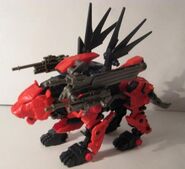 The Whitz Wolf and its Fuzor partner, Savinga, are the two components that make up the Whitz Tiger. Furthermore, the Transhawk can be transformed and used as an alternate head for the Whitz Tiger, creating the Trans Whitz Tiger.