The Wild Liger (ワイルドライガー, Wairudo Raigā) is a lion-type Zoid, one of over 200 species of biomechanical lifeforms depicted by TOMY's Zoids model, toy, and media franchise.

The Wild Liger is a medium Zoid with an open-air cockpit. Compared to other Zoids in the Zoids: Wild series, it is an M-sized Zoid.

In Zoids: Wild, the Wild Liger is known as Liger.

Liger is piloted by Arashi, the main character of Zoids: Wild. Known as a legendary Lion-Type Zoid, the Liger initially escaped from the Dark Metal Empire after defeating 100 soldiers. Team Supreme searched for it, before meeting Arashi.

The Liger is introduced as a "legendary" Zoid. This is not just an idle title, as is revealed in episode 44 when Arashi learns of the ancient legend involving the Liger.

The Liger is a unique, stubborn, Zoid. Very few people are allowed near the Liger, and even fewer allowed to touch it, let alone ride it.

The determination shown by Arashi in episode 1 allows him to ride the Liger. Yet it's not until mentoring by Quade that the Liger allows Arashi to proficiently ride it.

Several other people have been able to ride on Liger. Maverick is let onto the Zoid, a strange twist of fate considering that he could not board any other Zoid. Battalia is the first member of the Freedom to touch the Liger other than Arashi. Much later, in episode 43 Mitsuba rides the Liger with Arashi.

The Liger goes through several trials and tribulations. When learning what happened to Quade, the Liger goes Berserk in episode 14. This berserk form glows purple and rends Arashi rogue. He remembers nothing while in this state. After defeat in episode 20, Arashi seeks out Master Bug and learns a new powerful technique called "Ultra King Claw".

The Liger is injured in episode 37, losing a portion of its middle blade. It remains damaged until around episode 42 where it's repaired thanks to the help of resistance forces.

In the final episode, Liger and Arashi defeated Demise and Gigaboss using King Claw, putting an end to the Dark Metal Empire. After that, both of them dashed into the unknown in order to explore their huge world.

After Dias loses his Triceradogos in episode 12, Dias receives a silver Wild Liger from the Republic which he first boards in episode 25. This Wild Liger does not spout blades on the back, and instead has a cannon pack and several custom parts.

In episode 39, the Wild Liger is temporarily controlled by one of the antagonists and is forced to fight against the Rising Liger.

Dias uses the Wild Liger in several sorties, one notable inclusion is using the Gravity Cannon against the Zero Grizis in episode 44. The Gravity Cannon can only be used by a Lion-type Zoid, so must be sortied by either Dias or Leo.

The Wild Liger was featured in the Zoids: Wild Manga.

The Wild Liger features in the Zoids Wild: King of Blast game. In selected stores, the first few people who bought the game could obtain a variant called the Wild Liger Evil. 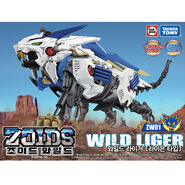 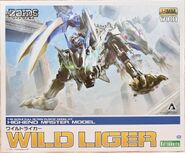 There are multiple variants of the Wild Liger, The model ZW15 is the "Awakened" Wild Liger also known Special Edition Wild Liger, and features a more defined color scheme. It has a top speed of 246km/h. A limited-edition Wild Liger was released for CoroCoro Comics and was the "Wild Liger Extreme Release" form.

Kotobukiya released a 1/35 scale Highend Master Model Wild Liger in October 2020 for 8,800 yen. It was originally scheduled to be released in August, but on June 17, 2020, Kotobukiya posted a news update about the kit's delay. A additional HMM kit, the Wild Liger (Guren Ver.) was released December 2020 release. It features red clear highlights instead of blue.

Zoids: Build Them To Battle[]

The Wild Liger was released online by Hasbro under the Zoids: Build Them To Battle line. It used the name Liger.