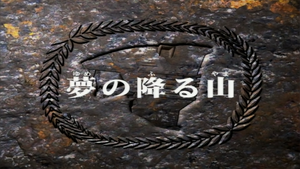 The Mountain of Dreams is the tenth episode from the anime series Zoids: Chaotic Century based on TOMY's Zoids model franchise.

The episode begins with Van and co. traveling through a mountainside, looking for a scientist named "Dr. D", who they hope may be able to enlighten them on the nature of "Zoid Eve". They find him in a hut which had been turned to ice (with him in it), and start trying to thaw him out.

They wake to find Dr. D thawed out and piloting the Command Wolf, much to Irvine's displeasure. He diagnoses that its sights are off by 3 degrees to the right, before introducing himself to Fiona and Zeke. He quickly takes advantage of Van's desire to find out about Zoid Eve, before also taking advantage of the help he offered Irvine to get him to chop wood. Suddenly he changes his mind and gets Van and Irvine to attack the "enemy"; which turns out to be some unarmed man on a bike. The man is Dr. D's grandson, and Moonbay, who had been left back in town, overhears how he was attacked by Irvine.

Meanwhile, Irvine and Van are taken by Dr. D to a set of ruins, where they are attacked by sleeper Guysaks, guarding an unmanned Republican supply base, which Dr. D is intending to raid for parts on his latest invention, revealing that he knows absolutely nothing about Zoid Eve in the process. His invention is to try and make it snow on the mountain he lives on. Dr. D, who had escaped by himself is attacked by a Guysak, but is saved by Moonbay (not before the Guysak destroys his house).

The story is explained by Dr. D's grandson, who says that the mountain they live on had once snowed, and this is his lifelong dream, bordering on obsession. He only mentioned Zoid Eve because he had heard Van and Irvine talking about it and used it to manipulate them. In the morning, Dr. D starts packing up to move with his grandson, as his materials had been destroyed in the fire. Van and Irvine decide to help him out and he gives his plan one more shot.

Dr. D fires the snow rocket, but nothing happens. Disheartened, they start leave, but it is only then that it does start to snow in earnest, covering the whole mountain and surrounding scenery in a thick layer of snow. This is no thanks to Dr. D's rocket, which was a dud; the snow was all natural.