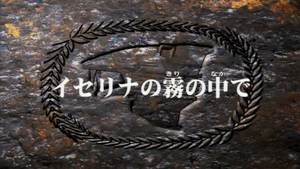 The Fog at Iselina is the eleventh episode from the anime series Zoids: Chaotic Century based on TOMY's Zoids model franchise.

The episode begins with the gang facing a great mountain, "Mt. Iselina", a mountain infamous for being treacherous, especially in fog. They set off without breakfast, in order to stay one step ahead of the Imperial. This proves to be a disastrous decision, as Van's hunger causes him to hallucinate about flying papayas, which he follows into the fog. He doesn't get lost, but Irvine and Fiona, who set out after him, do. Moonbay starts telling Van a scary tale about a "fog monster". Suddenly, what appears to be a monster passes by, but it turns out to be nothing more than the shadow of a passing Godos, messed up by the mountain's foggy nature. Rosa, the pilot of the Godos, invites Van up to her mountain village. Van tells her of his travels as Viola (the mercenary from a few episodes prior) flies up to the village, though she refuses to carpet bomb them, instead using terrain to her advantage. Van manages to take out her subordinate's Pteras, but is unable to beat the Redler, as it creates illusions with the fog, rending Van unable to fight. Rosa uses her village's mirrors to cast light over the Redler and let Van win.

It is only then that Viola is revealed to be the Redler's pilot and confronts Van with a gun, but Rosa recognizes her as her sister, who had left for the imperial army a long time. Van, knowing that the truth would ruin Rosa's image of her sister, lies and states that he was the real mercenary the whole time, and that Viola was chasing him for his evil acts. Viola and Moonbay join in on the lie, and Van escapes.

Eventually, the fog lifts and Irvine and Fiona are picked up by Van and Moonbay.